Had the loveliest weekend trip to Niagara Falls with one of my best friends, Fran! We had a blast roaming around upstate New York in the winter, and I wanted to share our fun itinerary in case you guys want to copy with your gal pals.

Fran and I have been best friends since she became my little in ZTA way back in 2013! Since college, I moved to Korea, and she moved down south to North Carolina where she’s a naval nurse. It’s obviously pretty hard to have in-person hangouts when you’re continents and states apart, so we try to make it special when we do hang out.

The last big thing we did together with our friend Corinne was run a half marathon… Which I stupidly and smartly suggested as a way to motivate myself to get back in shape that spring.

Since she was just deployed to Norway for a bit, I thought it’d be more fun to something less strenuous!

Cue Niagara Falls. In the winter.

I don’t know why I thought of this. My friends over at Angie Away had just visited, and I kept seeing their photos on my Instagram feed. I mean, Niagara is the waterfall of waterfalls. Like when I went to Taiwan, they called Shifen, Taiwan’s “Little Niagara.” And that waterfall was amazing, so I could only imagine Niagara was even more incredible in person.

Anyway, then I decided I wanted to visit Niagara, and since my first free time was in January, I looked up photos of “frozen” Niagara. Once Fran was back and could communicate again, I messaged and asked her if she wanted to go.

And then boom! She booked her flights, we had an itinerary, and not even Winter Storm Harper stopped us from going a day after it was over!

Here’s what we got up to if you want to go too:

Map of Our Niagara Falls Trip

So, the theme of this girls’ getaway was cozy and fun. After all, we’re not going on Maid of the Mist when the temperatures are sub-freezing. Maid of the Mist isn’t even open in the winter. Neither are the more adventurous things like zip-lining or helicopter rides.

However, there’s still a lot to do in the area, and the falls really are stunning with all the freshly fallen snow and icicles.

After getting up, we drove from Buffalo straight to Niagara Falls State Park. We wandered around Goat Island and stopped into the Cave of Winds Pavilion to learn a bit more about Niagara’s history.

The main video is called, “The World Changed Here,” and it’s all about how Niagara Falls played a pretty big role in US history. I didn’t realize until I was planning the trip, but it’s our country’s first state park, the oldest in the US!

Before and after we walked around Goat Island and just enjoyed what a winter wonderland it was. Because there was such a heavy snowfall the weekend before, the park was nearly empty and much of it still looked pristine.

Once we were sufficiently cold from being outside, we drove over to Power City Eatery, which is a nice little place for lunch. I got the maple glazed ham sandwich, and it was delicious. They also had chai lattes, which are always my weakness.

Less than a few minutes walk from Power City Eatery is a super cute alleyway with colorful murals. We obviously took some photos, and I took off my jacket haha

Afternoon – Hopping Over to Canada

After lunch, we decided to hop over to Canada to see the falls from across the border! Fran had never been to Canada before, and when you’re so close to another country, why not? It was a bit icier over there, so we didn’t drive around too much. We just parked by the police station (I marked it on the map) and paid for about 45 minutes to walk along the road parallel to the falls. 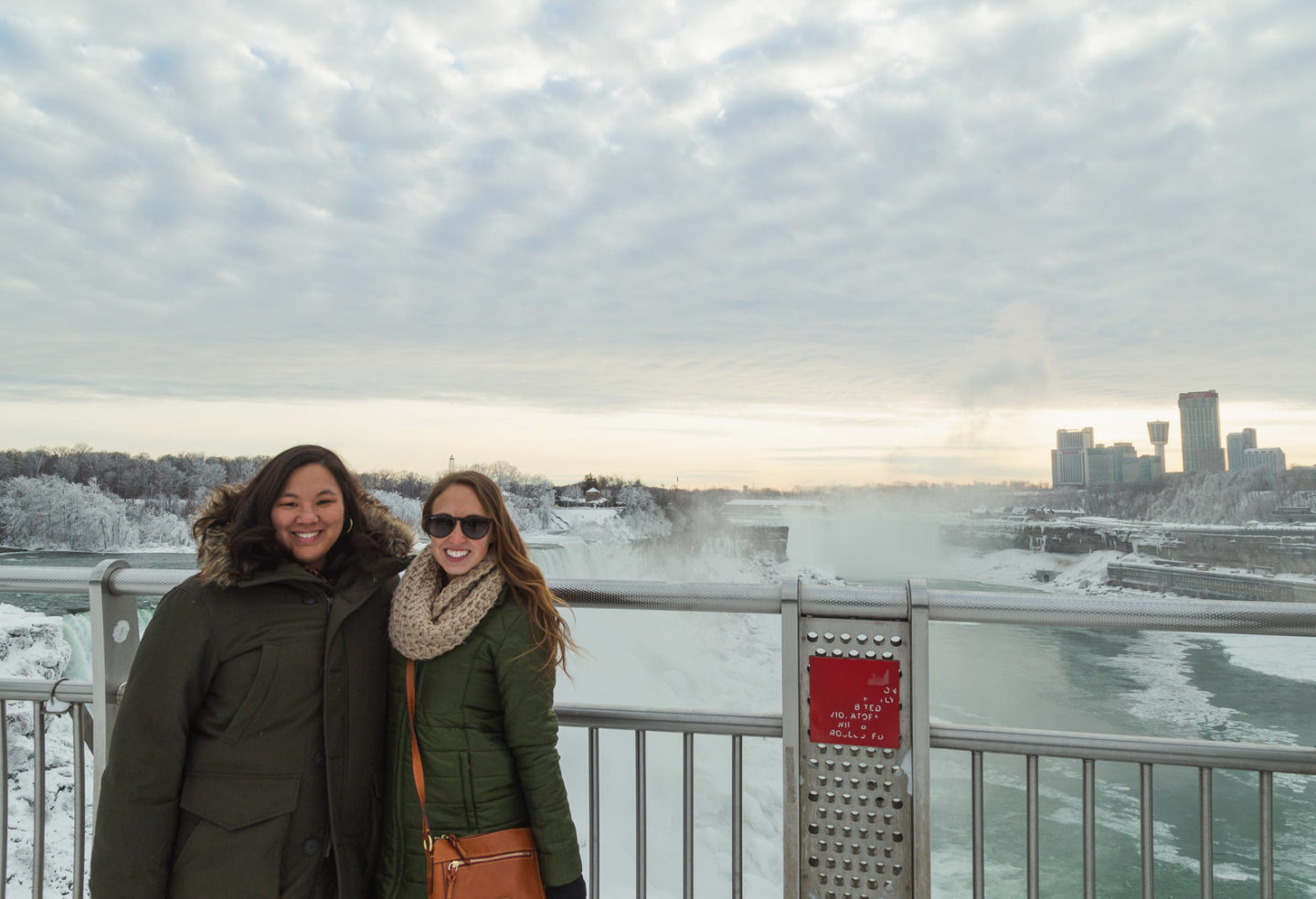 Back to the American Side

We then went back over to the American side to see the falls from the Observation Tower. If you go in the summer, this is also where Maids of the Mist is at. You’ll walk through a visitor center to get to the tower. It’s a little confusing at first, but you’ll see it eventually.

We finally made our way over to check-in to Seneca Niagara Resort & Casino and enjoy our corner suite. It was seriously nice, and the views from the 21st floor were insane.

Also, if you opt out of daily room cleaning, you get a $10 green for green bonus to use in the casino. You’ll basically add this on top of the $15 you get to open up a card with them.

We had dinner at the fabulous Western Door Steakhouse, which was in the resort. By the time of our reservations, we were starving! It’s such a nice place to splurge because the waiters were so lovely. Don’t forget to dress appropriately.

I highly recommend the lobster mac and cheese if you go. It was so rich, I wound up taking it home with me. We also split the apple crisp and vanilla gelato option because it was big enough for two.

We were pretty cold from being outside all day, so we decided to take advantage of our jacuzzi and the views from our room and just hang out and catch up even more.

We started the morning early with massages at Seneca Niagara’s spa, which both of us needed (okay, really, really wanted). After we checked in, we changed into our robes in the locker room and waited in a little area until our masseuses came in to fetch us. Afterward, we went into the steam and dry saunas in our bathrobes. It was suchhhh a lovely way to get a little spoiled!

Since we had an extra day and it was raining, we didn’t go to Lewiston until our third day, but if it’s nice weather, I’d head right over here for breakfast. Orange Cat Coffee Co is super cute and has a ton of fun lattes. I forget the name, but I got the one with chocolate and peppermint in it.

We then drove down to the waterfront, stopped into the Village Bake Shoppe for a cupcake, and wandered around the town for a bit. We didn’t know about it at the time, but Brickyard is supposed to be good for wings (and, of course, it has a brewery attached).

Did you know Niagara has its own wine trail? The area has a pretty unique climate, which means there’s about 22 wineries that make up the trail. We stopped by two of them:

A Gust of Sun Winery

You may have to call ahead to make an appointment in the winter, but it’s worth it because A Gust of Sun is one of two that do chocolate and wine pairings. And I actually tried the wine this time around! In addition to growing their own grapes, they get their fruit as close to their winery as possible and everything is made in NY.

Their name, by the way, is a play on their last name “Gustavson.”

The owner was super lovely and went through the listings with us. I wrote down what I tried:

I got my mom the Sweet Diamond since it was kind of the middle ground of being too sweet and not sweet enough, and I personally finished my whole sample of Sax on the Peach!

We then stopped over at Niagara Landing Wine Cellars. Fran tried some of their wines while I really just wanted to try this ice wine we’d been hearing about! It’s such a cool concept and is so unique there’s a whole festival for it. If you want an affordable version, Niagara Landing sells them for $30. I got a bottle for my family to try.

Plus there are cute pups to hang out with while you sample!

Before our dinner reservations, we decided to take advantage of our combined $35 free play to try out the casino. Neither of us are gamblers, so we tried random slot machines to see what would happen. As you might guess, we walked out with like $0.50 total. Did get to see what a Titanic-themed slot machine was like though!

We spent our last dinner at Seneca’s Italian restaurant, La Cascata. Fran’s family is Italian, and I’ve been in an Italian-craving kick, so we were more than happy to indulge!

We didn’t wind up going back out into the cold night to see them, but there are light shows for the falls daily! We could see glimpses of it from our room.

And there you have it! A nice, wintry weekend trip to Niagara Falls with one of my best friends. If you’re looking for a quiet weekend away, I can’t recommend Niagara in the winter enough. It’s one of the most popular attractions in the country, so I imagine it’s much, much more crowded in the warmer months than it is when temperatures are nearly subzero! In snowy, freezing temperatures though? It’s perfect!

What would you do on your girls’ getaway to Niagara Falls?

for more travel in the usa

The USA is a massive country, and I always love discovering new places to visit. I’m actually pretty sure I’ll still be hearing of new gems when I’m 90 years old and need a wheelchair to get around! Since I’ve been interested in travel, I’ve visited a number of different places in the US alone. Check out some of posts:

Thank you so much to Niagara Falls USA for hosting us on this trip! As always, all opinions are my own.