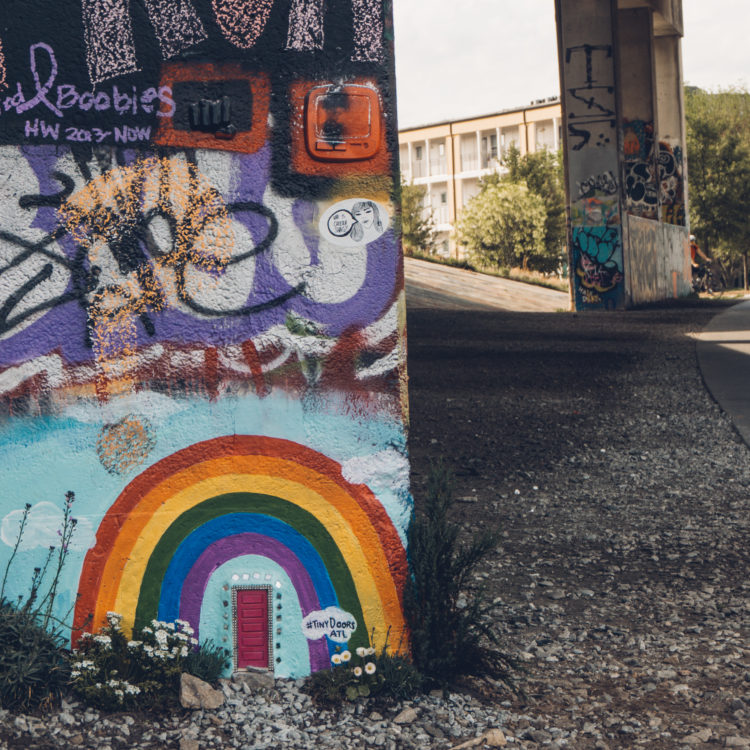 Looking for all the top things to do in Atlanta? Check out this post from my trip!

There are very few good things about friends moving all around the country. The main one is that I have the perfect excuse to travel and see them. I’ve been meaning to visit Atlanta, Georgia’s capital, for what feels like forever. I even put it on my Southern road trip wish list!

One of my longest friends, Kate, moved there for university and now lives there for work. It’s crazy, but between studying in Spain, having a poor college budget, and then moving to Korea, this is actually the first solid chance I’ve had to fly down and see her new stomping grounds.

Since she showed me around and a few friends gave me tips on what to see, I thought I’d share some of the things to do in Atlanta if you happen to visit the city on your own. I have to say I was charmed a lot more than I was expecting!

Before I go into what to do, here are some quick tips to keep in mind.

And now, check out some of these things to do in Georgia’s capital city!

10 Things to Do in Atlanta 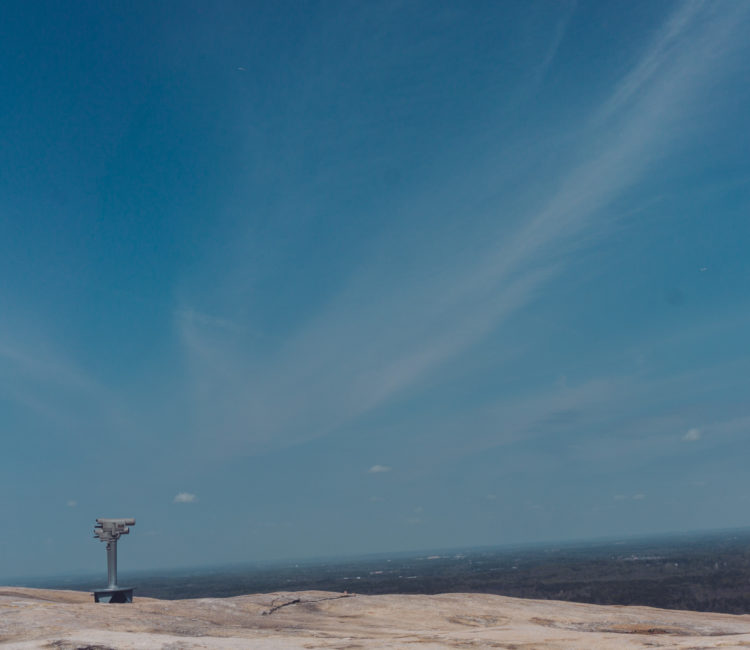 On my first full day in Atlanta, we did a mini-hike up Stone Mountain to see views of the skyline from afar. It only took us maybe 30-45 minutes to reach the top, and it’s definitely an easier trail for those who are used to hiking.

Interestingly enough, the mountain has quite the history with the Confederacy, both good and bad. There’s a huge carving of Jefferson Davis, Robert E. Lee, and Stonewall Jackson along one side to commemorate the former leaders, and I couldn’t help but notice the Confederate flag flying with the rest on my way down. It’s also unfortunate to note that the Ku Klux Klan’s second coming was also at Stone Mountain…

On a more positive note, you might also recognize the name from Martin Luther King Jr.’s speech, and Atlanta is planning to build a freedom bell from the summit. As with much of what’s tied with the Civil War, Stone Mountain has a conflicting but hopeful future, and it should definitely not be missed whether you enjoy the outdoors or are interested in its US history. 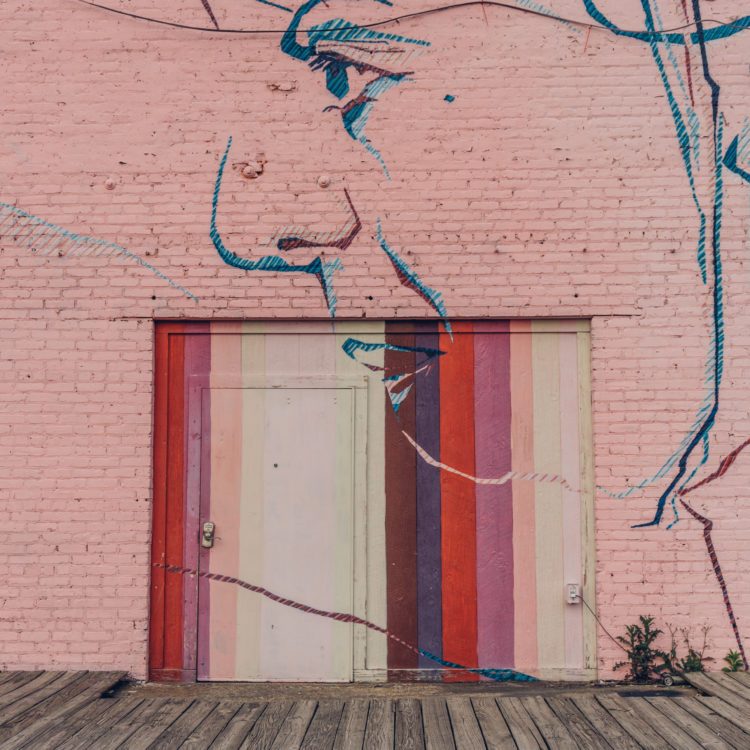 2. Walk Along the Beltline.

One of the most interesting features in Atlanta is the Beltline. It’s a 22-mile loop around the main area of the city and connects various parks and other trails. We walked along a section that wound up going by Ponce City Market and all the way up to Piedmont Park.

What makes the Beltline so interesting is all the public art spread along the walkways. It’s a great way to get around the city while being outdoors and enjoying the different art installations.

3. Chase after the Tiny Doors!

Best. Discovery. of. the. Trip. I hadn’t heard anything about Tiny Doors until I got to Atlanta, and Kate mentioned them. They’re so whimsical and adorable, you’ll want to find all of them. I only found 4, all along the Beltline. Check their website to see where they’re all located. I think my favorite was along the pastel dot wall simply because we weren’t expecting it!

4. Brunch, all the brunch

The first thing we did after Kate picked me up at the airport was to choose a spot and dig in. We went to Rise-n-Dine, which is a tiny little place in Emory Village. Parking can be a nightmare, so you might want to Uber here. The Flying Biscuit Cafe is also an Atlanta favorite. I went twice– once on my own in Midtown and once with Kate in the Terminus Building in Buckhead. Even if you’re not a fan of grits normally, try them at Flying Biscuit. I normally hate them, but Southern grits are a whole different ballgame than what sleepover moms tried to feed me as a kid.

Another place you should definitely check out is the Buttermilk Kitchen. It’s very cute, and perfect for the health conscious. I made it a point to go and visit on my last day. 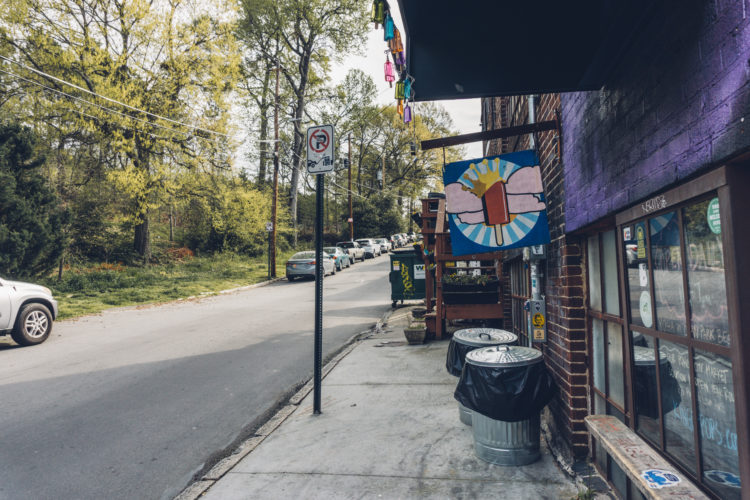 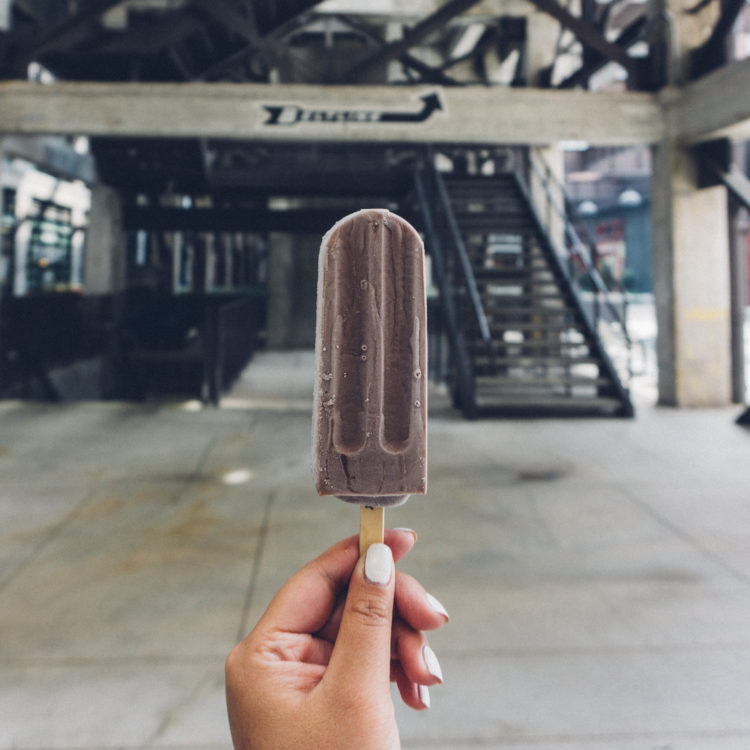 Before I went, everyone told me I needed to go to King of Pops. I’m not that big of a popsicle person, so I didn’t really understand the fuss, but I noted it as something to try at least once.

Guys, it’s amazing. Even if you’re not an ice cream person, you need to try the chocolate sea salt pop. The franchise was created after the youngest of three brothers was laid off during the Great Recession. It’s only really around Georgia and a few other southern states, and it has no intentions of expanding. Inspired by the paleta of Latin America, it takes its ingredient inspiration and combinations from the South instead.

And, as if you needed more convincing beyond “chocolate sea salt,” the founders of KoP are dedicated to being as local and environmentally as possible. They work with nearby farms, gardens, and bakeries, and any food waste is composted locally.

You can buy a pop at their headquarters (where you can also spot a tiny door) or at their shop in Ponce City Market.

6. Gorge on tapas during Eclipse di Luna’s 1/2 Off Special

Honestly, many of these things have to do with food, but, I mean, it’s the South! If you’re not eating your way to a food baby, are you really doing it right? Eclipse di Luna a Spanish tapa restaurant and they have a 1/2 off price on their tapas from 4:00 p.m. – 6:00 p.m., Mondays-Thursdays. And it ends exactly at 6. Don’t even try getting the deal at 6:01 p.m.

Also, it might be better than any of the tapas I had in Spain… *cough* 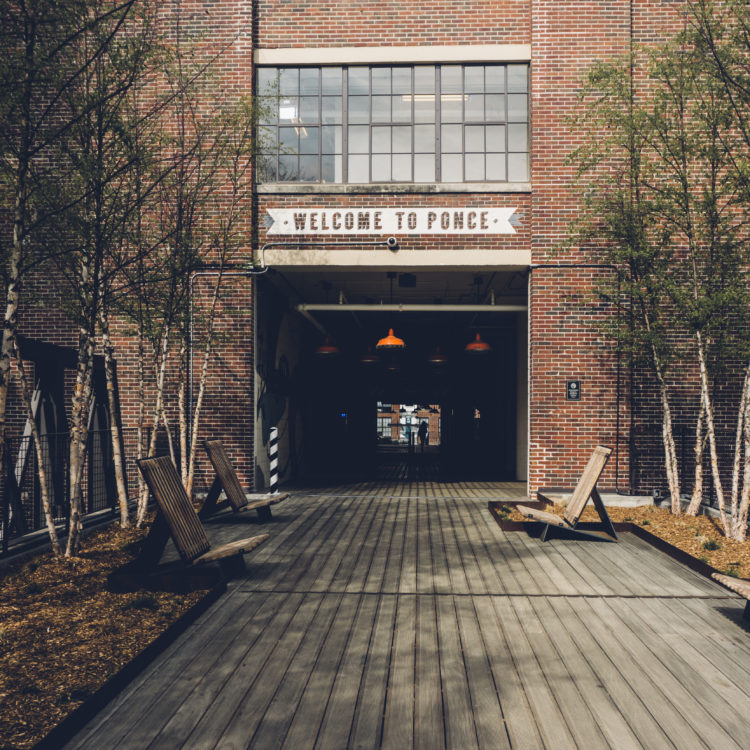 I know I’ve mentioned it a few times already above, so let me explain a little about what Ponce City Market. Right on the Beltline and in the Old Fourth Ward, Ponce actually fairly new to Atlanta. It’s in the former Sears, Roebuck, & Co building and aims to breathe new life into the city’s historic areas while offering something for the communities it connects. You can read the whole history on its site.

My one friend said that it’s the main thing he does when friends come and visit him. I loved wandering around the different stores, getting lunch down in their main food court area, and, of course, getting King of Pops. Beware, it’s very busy on the weekends as all shopping areas tend to be, but earlier in the morning and at night it was pretty quiet.

8. Relax by the River at Chattahoochee Coffee Co.

My same friend recommended this as a great place to enjoy the Chattahoochee River. He did mention that it’s tucked away in an apartment complex, so don’t be alarmed if you don’t see the coffee house right away. You actually have to call the place from the front gate, but they’re used to it and will just ring you in. If you’re working while traveling, this is a great place to come as everyone inside and on the deck seemed to be at work on a laptop.

We took our things to go and walked all the way out to the picnic benches by the river itself to enjoy the afternoon. Also, as a heads up, it’s only open to residents on the weekend. 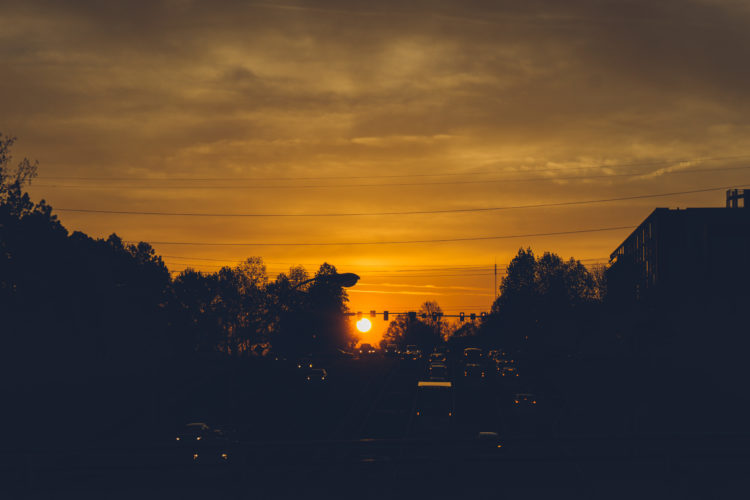 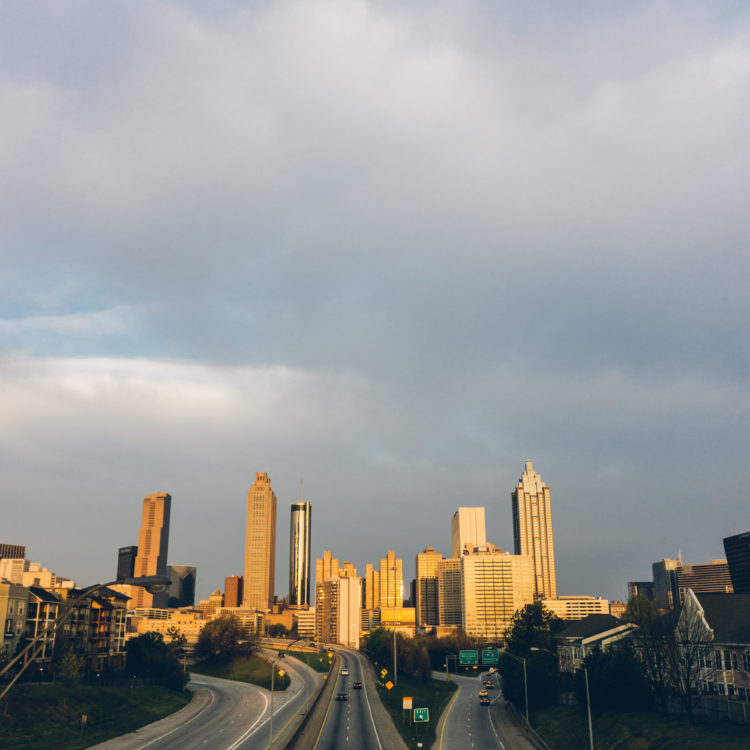 9. Watch the sun rise or set from Jackson Street Bridge.

One of the most recommended places I’ve seen for views of the Atlanta skyline is at Jackson Street Bridge. You might also recognize it from a certain television show with zombies*… While most people go for the sunset, I wound up going for the sunrise and only shared the bridge with one other photographer.

**TIP: Getting there is actually super confusing if you don’t have a car! It goes over another road, and it’s by Freedom Park, but it’s hard to tell if Freedom Park is below the bridge or on the same level. It won’t show up in Uber, so I found it on Google Maps and essentially picked a corner to drop a pin in the Uber app. My driver was pretty confused, but we managed to find it! It’s totally worth the early morning wake-up call. Look for where Cain St. meets Jackson St. NE to drop your pin.

It’s the South, of course, you need to go to barbecue! While there are plenty of places to choose from, we went to Community Q BBQ. I actually really like the way they run their business — every day they cook fresh. The only leftovers they use are in baked beans or stew and anything else they donate to a food bank. This means that sometimes they’ll run out of meat if you get there too late.

We all got one of the sandwich options with two sides, and it was more than enough. You’ll definitely be quite full by the end! 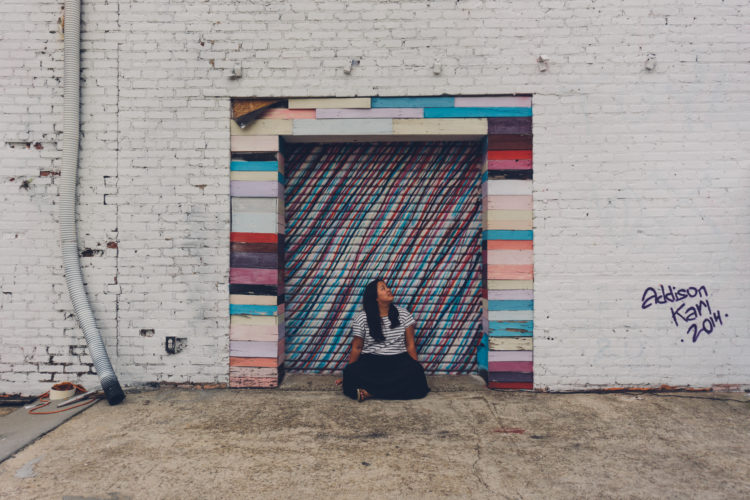 Other Things to Do that I Didn’t

There are a few places I meant to go and just didn’t get around to visiting! Here’s a quick list from the map I made. If you want to know more, the duo behind Local Adventurer is native to Atlanta, so they have a ton of fun information on their site.

You can book a full MLK tour here

I realize as I finish this post that there’s a severe lack of food photos… Mostly because I didn’t take any. You can clearly see where my priorities were when eating out. :p

Anyhow, those are most of the things I did while I visited Atlanta. I definitely have to make a return trip to Georgia in general as there are a ton of smaller towns (not to mention Savannah) that I’d like to visit, and I need to finish finding all the tiny doors!

What are some of your favorite things to do in Atlanta? Let me know what I missed! 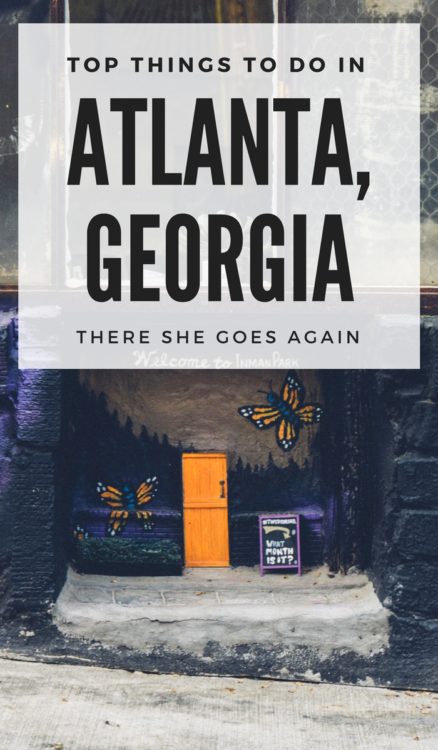