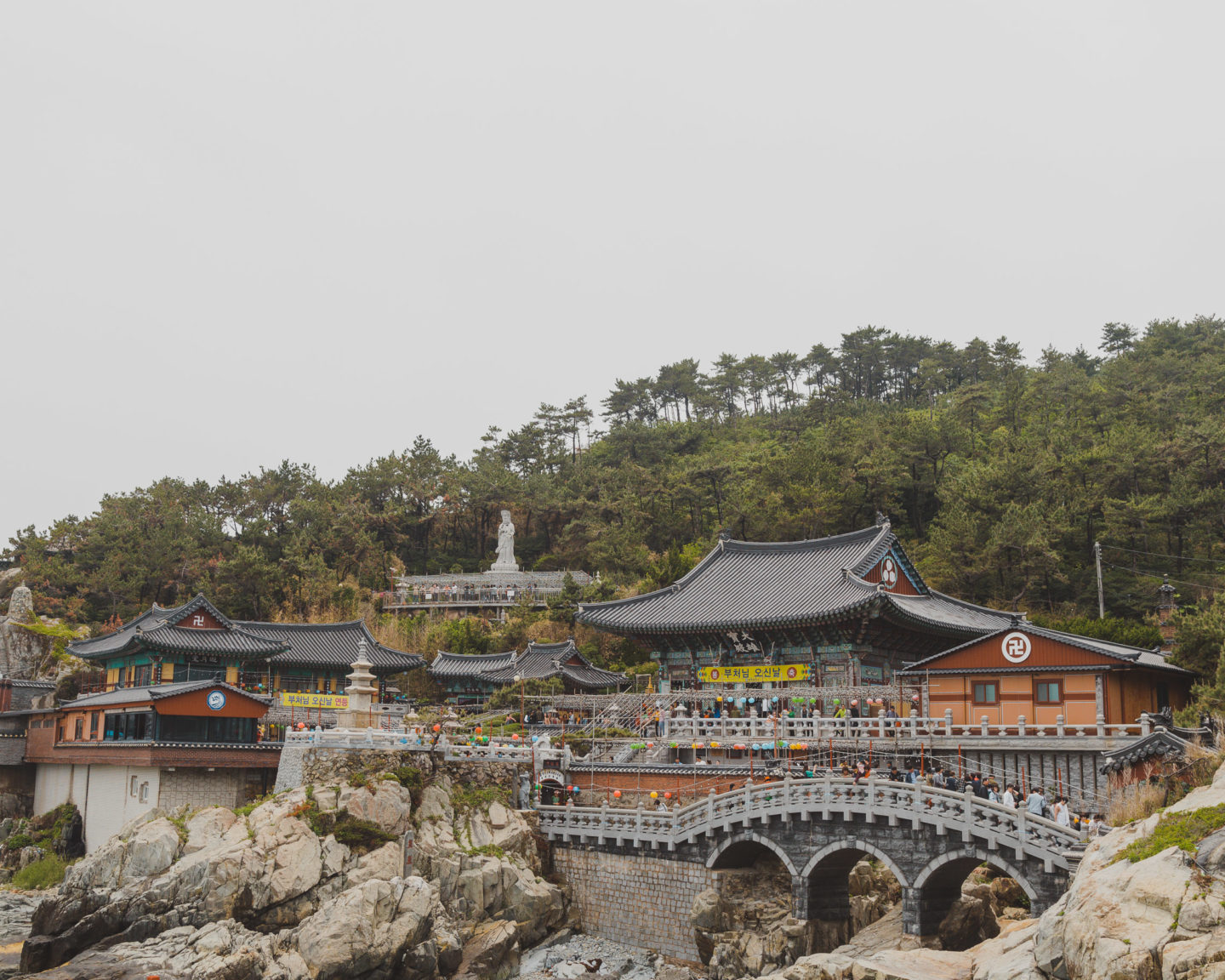 Busan is to Los Angeles like Seoul is to New York City. Far away and along the southern coast, it manages to balance being the second largest city in the country while also feeling significantly more laidback. I’ve been quite a few times since living here, so I thought I’d compile a list of all the things to do in Busan if you’re visiting!

If I’m being completely honest, every time I went while living in Namwon was pretty much the same pattern. I went a handful of times to visit Gamcheon Culture Village and to visit the beach while looking for some foreign food. I always meant to do more, especially because I prefer flying out of Gimhae, but I never got around to it!

The last two trips to Busan this last year, I managed to do a lot of new things, which is why I was inspired to finally put this post together. On this most recent trip, I stayed with my friends Kayley and Mark, and we knocked off quite a lot in one weekend!

I definitely love Busan, and I’ll probably visit more when I visit Korea in the future. It’s the setting to some of my favorite dramas and music videos, and it combines the best of city and beach in one place!

18 Cool Things to Do in Busan

Okay, or take the cable car up part of the way :P

Back in March for Ryan’s birthday weekend, we spent Saturday semi-hiking up Geumjeongsan (Mt. Geumjeong). The mountain has some really pretty views of Busan, and it was used for defense purposes back in the day.

It was more of a “relaxed” hike, so we didn’t visit a most of the mountain, but after the cable car, we went over to the South Gate (남문) and then hiked over to Seokbulsa (석불사).

I’m going to be honest, if I had known about the other temple, Beomeosa, and how steep the last bit of getting to Seokbulsa was, I would have chosen Beomeosa. Seokbulsa was nice, and the carvings along the side were cool, but man, the entire last bit to the temple felt like it was forever, and the views weren’t that pretty.

Haedong Yongungsa is the famous seaside temple you’ll probably see in most of Busan’s tourism photos. What makes it so special is the fact that it’s on the sea instead of tucked away in a mountain. While it originally dates all the way back to 1376, the current structure was reconstructed in 1970.

We went the weekend before Buddha’s birthday, and I don’t recommend it! The temple is pretty crowded no matter what time of year, but we thought at least it’d be pretty with all the colorful lanterns up. Wrong.

Haedong Yongungsa might be the only Buddhist temple in Korea where whoever’s in charge waits until the week of to finish decorating! Instead of colorful lanterns, were greeted with only ugly, gray poles as though someone started getting things ready and abandoned the project halfway through.

To Get Here: Take the subway to Ohshiria Station (오시리아). We took a local bus from the station to the closest entrance, but it’ll be faster and easier to just taxi.

If you’ve been following this blog for a while now, you know Gamcheon is by far my favorite place in Korea. I know it’s not necessarily the prettiest or the most traditional, but, I dunno, I just love it! You can read my full post on Busan’s “Little Santorini” here.

To Get Here: Get off at Toseong Station (토성역), Exit 6 or 8 and then transfer to one of the buses. The bus stop will be on the side of Exit 6 in front of the hospital. There are quite a few buses that go to the entrance of Gamcheon, so I’d just ask the driver if you can’t read the signs.

4. Go shopping in Nampo-dong (남포동) and walk around the different markets and alleyways.

I had no idea this neighborhood even existed until Kayley asked me if I wanted to go after Gamcheon! Turns out it’s this huge shopping area, but it’s more markets and busy alleyways than the expensive brand stores of Myeongdong or the crowded floors of Dongdaemun. There’s a distinctly older vibe to the area which makes it well worth wandering around.

It’s also home to the Busan International Film Festival (BIFF), which is still on my list to attend!

To Get Here: Get off at Nampo Station (남포역), Exit 1. You’ll first walk by the bigger road and a lot of camera shops. On the main road, go left towards the Busan International Film Festival (BIFF) street, and you’ll start to see all the shops and markets.

For a tour around Nampo-dong, check out this one 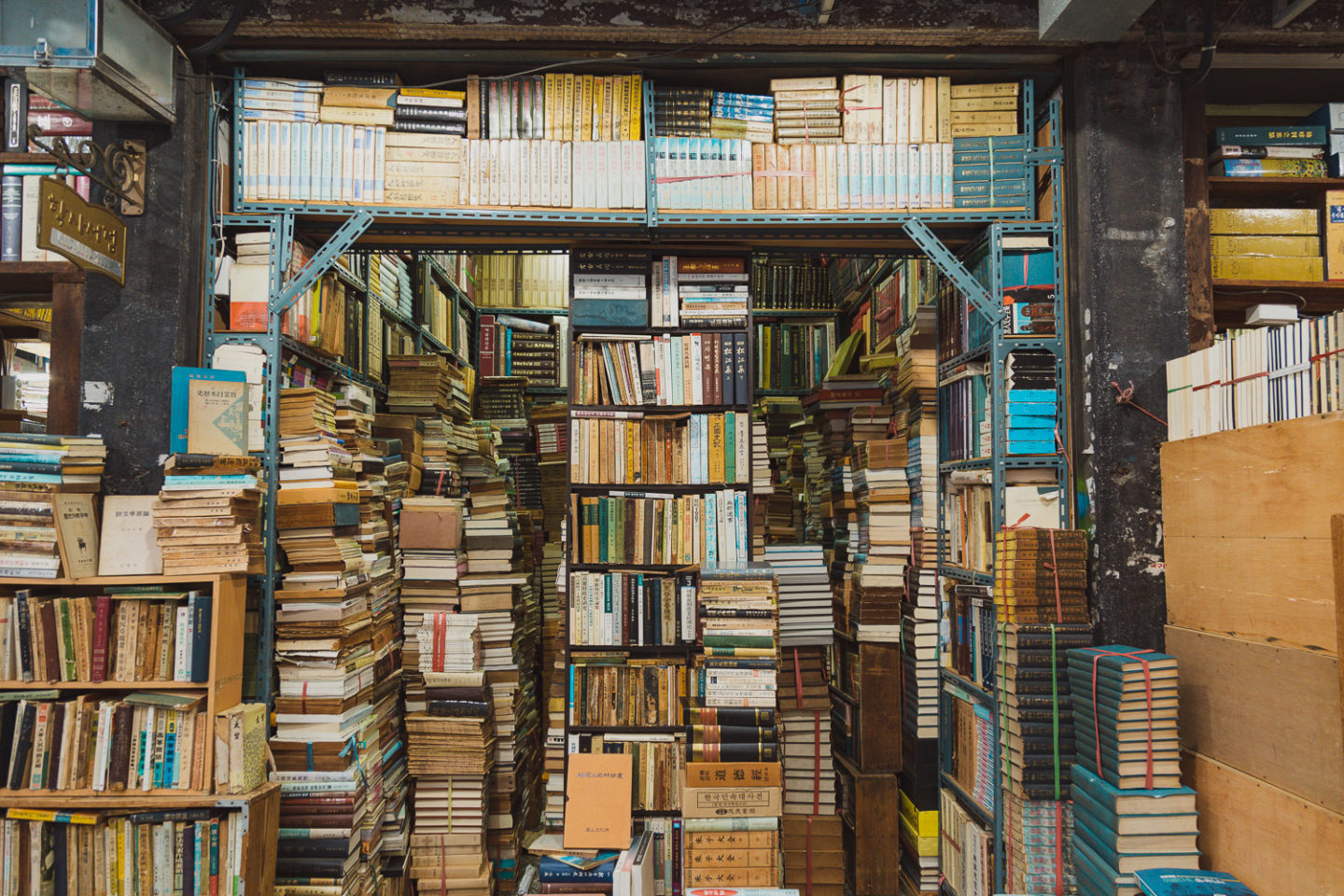 A short walk from Nampo-dong is the famous Book Alley or Book Street! After Korea established independence, people started to gather to sell the books the Japanese left behind. It grew as refugees during the Korean War came to sell their own books, and it grew even more as students and teachers began to buy and sell in the alley as well! Nowadays you can roam along and find a ton of old and sometimes rare books. Of course, everything is in Korean besides a few stalls we found with English books.

To Get Here: If you’re not coming from Nampo-dong, you can use Toseong Station (토성역), Exit 1. You’ll see this awkward four-way intersection, and it’ll be on the left.

6. Enjoy the sea at Gwanghalli and Haeundae.

You can’t go to Busan and not visit the sea! I mean, I guess you could, but where’s the fun in that? The main beach is Haeundae, and the downtown area near the beach is full of good foreign food restaurants. I actually thought Haeundae was really beautiful, but I went at sunset in the winter, not in the dead of summer during the day when I’m sure it’s crowded with people and umbrellas.

If you want something a little less crowded and not as well known, then I’d pop over to Gwanghalli! If the Mexican place is still there (and good), then I’d get some nachos and sit on the deck to enjoy the breeze and the views. You could also go paddleboarding here* if you visit in the summer.

How to Get There:

Listen, I cannot emphasize to you enough how amazing jimjilbangs are. Just get over the nudity fears because they’re separated by gender, and we all have boobs and vaginas, and who cares?! It’s just skin!

If regular jimjilbangs are nice, Spaland is the granddaddy of them all. We went early Sunday morning and had the most relaxing time. While the girls went to soak in the tubs, the guys went to the others, and we just relaxed in the different baths. There’s even an outdoor area which is fun when it’s cold out.

We then met up for a bit in the main area (where you put on the PJ type outfits), and tried out the different heat rooms, got something to eat and drink, and chilled out on the lounge chairs. Our last bit was to scrub at our skin and wash up for lunch!

To Get There: Take the subway to Centum City Station (센텀시티역), Exit 12. Go left past the CGV and you’ll see signs for Spaland.

Taejong-dae is basically this pretty area along the coast. The big thing to do is visit the observatory and see Sinseon Rock and Mangbuseok. Mangubseok is named after the woman who waited for her husband after he was taken to Japan. It reminds me a bit of the candlestick rock in Sokcho.

So Oryukdo is a series of 5-6 islands, and all the photos of the area just look so beautiful. There’s also a little skywalk that looks fun.

I feel like whenever I asked my students what I should do in Busan, they always answered with Haeundae and eating at Jagalchi Fish Market! I was never keen on just walking around a fish market, but it’s been a while since my bad Sokcho experience, and I’ve had plenty of fish (both raw and cooked) since, so I want to give it a try! I may even try a cooking class like this one.

P.S. Jagalchi is featured a bit in Black Panther ;)

Busan Tower, in Yongdusan Park, is actually right in Nampo-dong. The only reason we didn’t go up is that it was raining and gray, so the views weren’t going to be worth the  entrance fee. If I go back on a sunny day I’d definitely go up around sunset and stay for the night views as well. Get a discount ticket here

For some reason, I never quite put together how close Geoje was to Busan until we were sitting on the subway and I saw that the one line goes all the way to the island. I know #muchkoreantravelblogger of me.

Anyhow, my friend has been to Geoje a few times and loved the beautiful scenery and the beaches! I still think it’d be fun to gather up some BBQ supplies and have a nice picnic in the area. 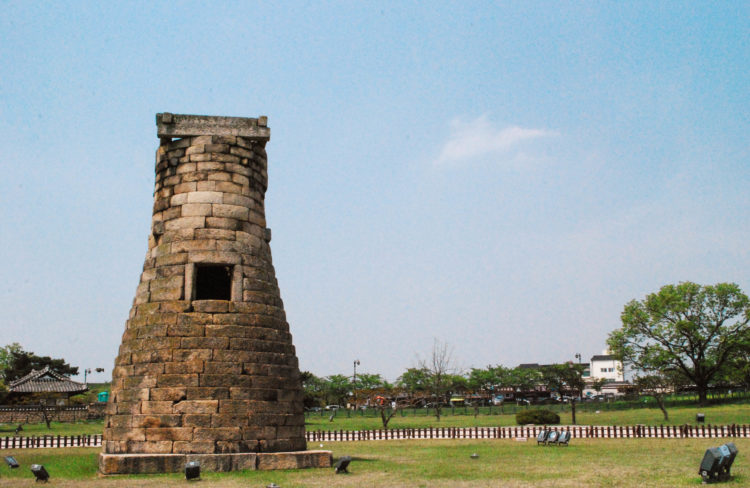 Gyeongju is one of my favorite places in Korea! The only reason I haven’t properly written about it is because my camera settings were wonky, and nearly all my photos came out grainy and unusable. Gyeongju has all the famous temples and landmarks from the Silla Dynasty, which is unique as most of Korea’s traditional architecture is from the later Joseon Dynasty. Check here for a day tour to Gyeongju from Busan 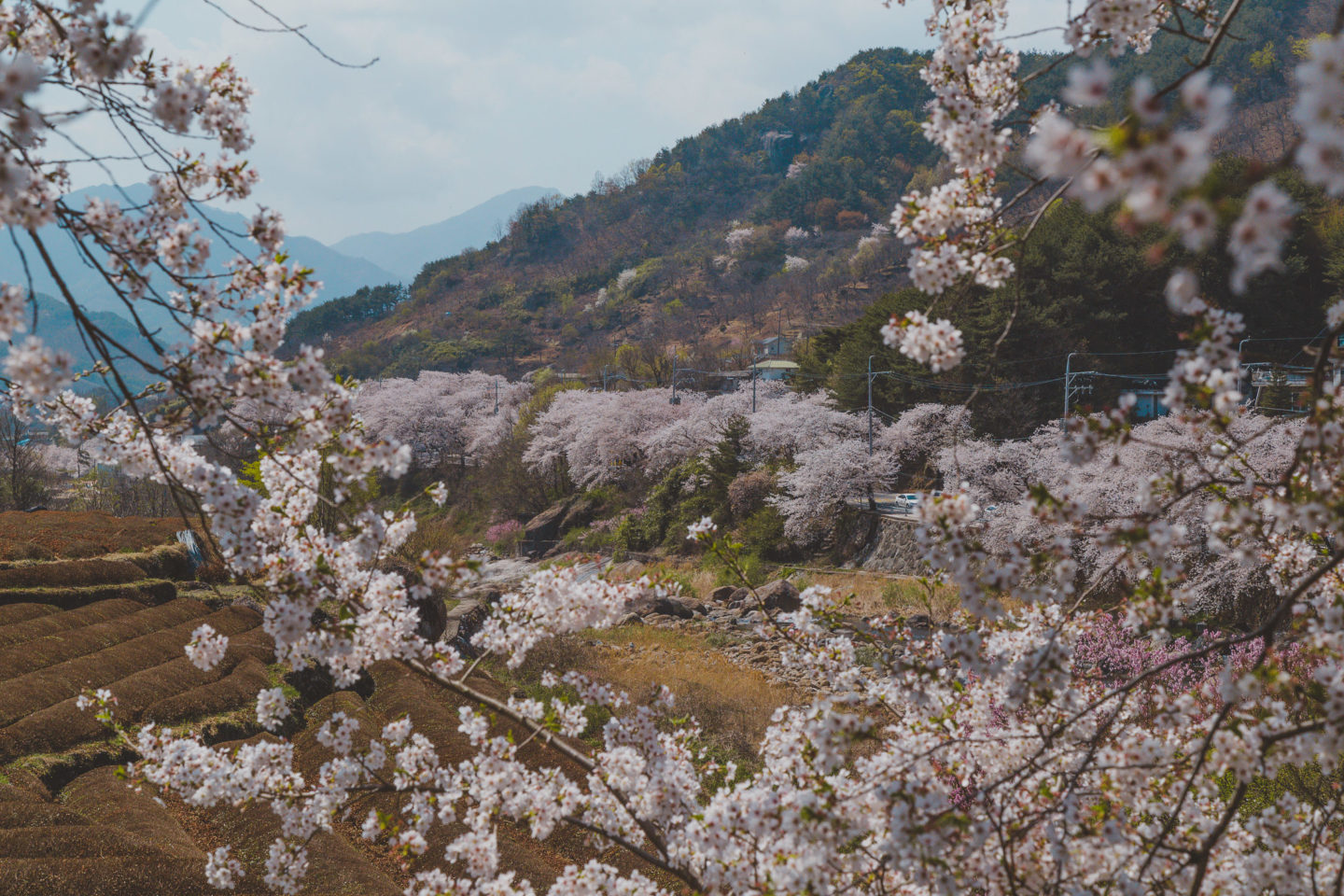 If you’re visiting during cherry blossoms season, do NOT miss heading over to Hwagae in Hadong early in the morning to see all the blooms. It’s easily the most beautiful place to see cherry blossoms in this whole country.

For more on Hwagae, check here 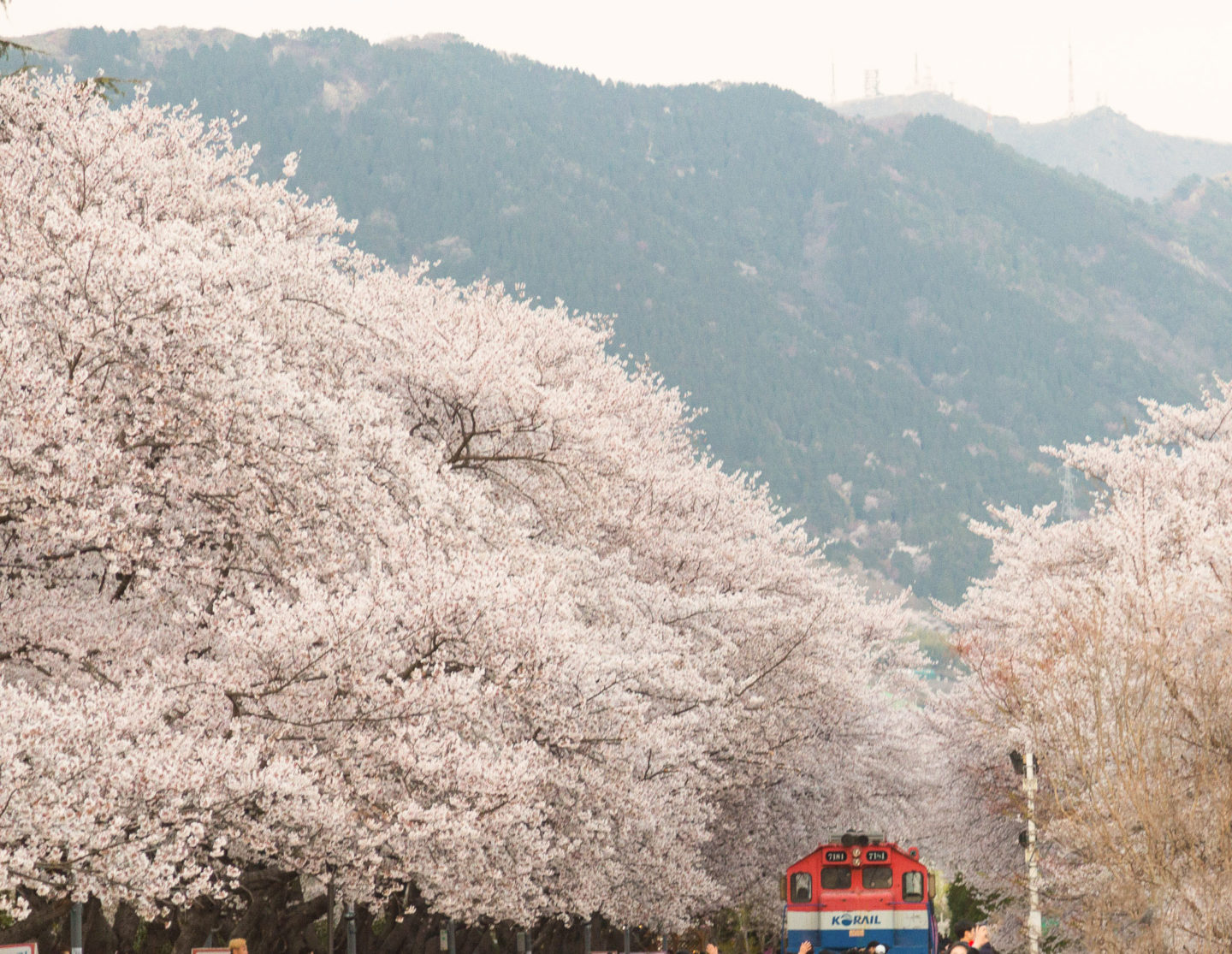 Jinhae is the most famous spot for cherry blossoms! If you come in early spring, then head over (early and on a weekday for the least amount of crowds), to see them all in bloom. See here for my full guide to the Jinhae festival

Oedo is famous for its botanical garden, which is European-inspired. I don’t know too much else about it, but I’m a sucker for botanical gardens! Check here for a tour to Oedo.

Tongyeong is a pretty seaside city, and it’s definitely worth visiting if you have your own car or can navigate it pretty easily. Take the cable cars up Mireuksan, visit one of the islands, and walk around the pretty mural village! For a quick guide to Tongyeong, read here

Did you know you could hop over to Japan from Busan?! I knew Fukuoka was technically a ferry ride away, but I didn’t know if there were closer places you could visit. Turns out there are! Only an hour away is Tsushima Island, and now I’m trying to figure out how I can feasibly go.

I will say, according to my students, Changwon claims Tsushima is actually Korean and they call it Daekdo, but when I asked if you need a passport to visit, they said yes.

And that’s my list of the best things to do in Busan! I’m sure there’s a TON more I’ll wind up adding, so let me know if I’m missing out below! 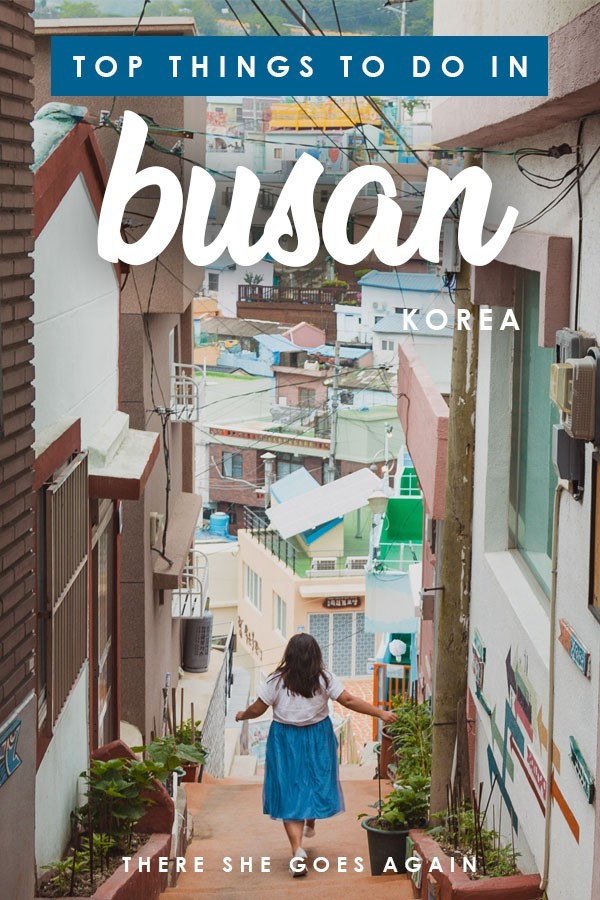