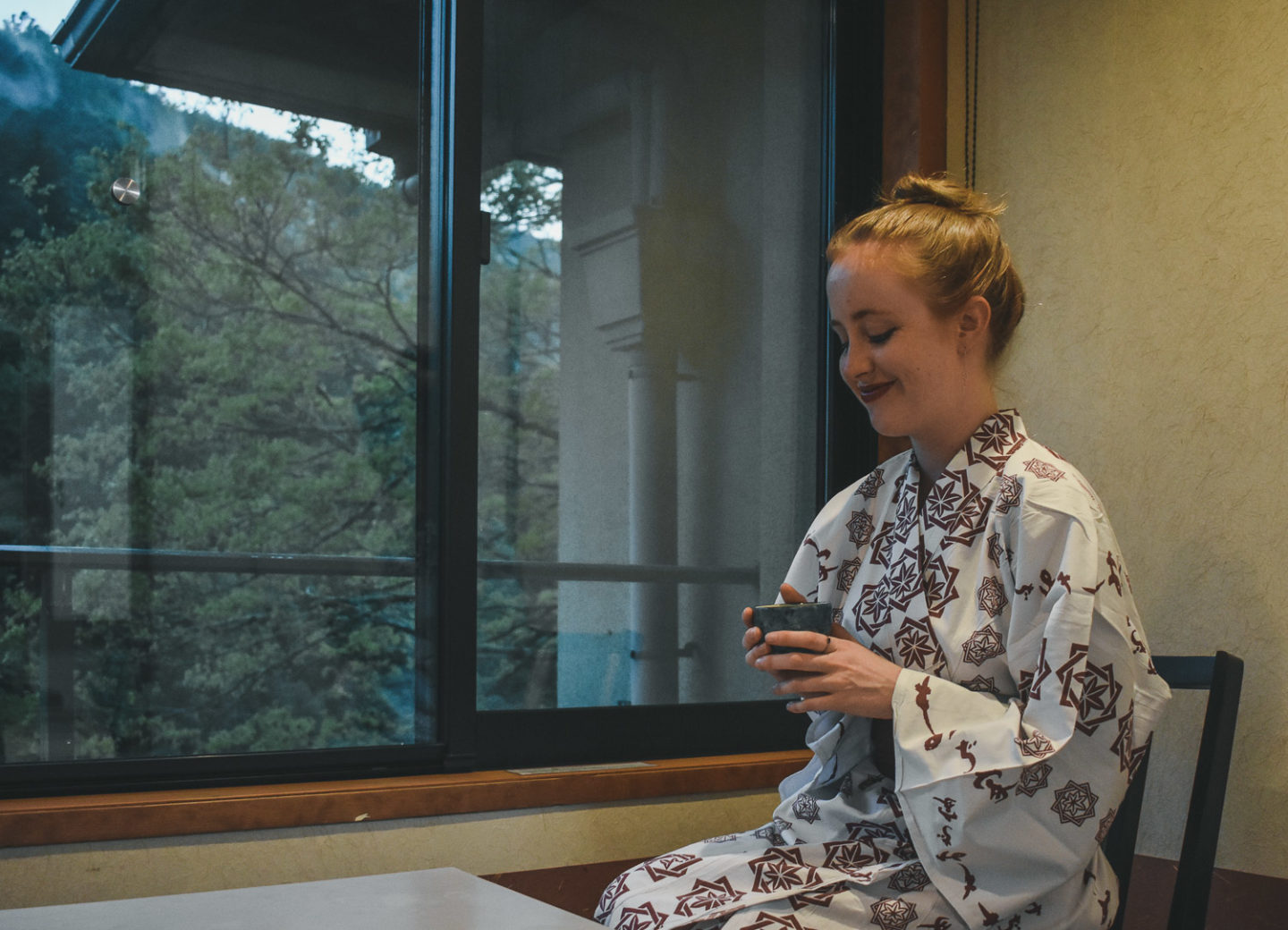 Staying a ryokan in Kyoto is one of the loveliest experiences you can have in Japan. Here’s a full guide on what to expect and some tips to make the most of your experience.

When I met up with my friend, Autumn, in Seoul recently, she had just gotten back from a quick trip to Kyoto. She went with her friend, Kimmy, over a long weekend, and one of the things they wanted to do was stay overnight in a ryokan. As she told me about the delicious food and beautiful views, I knew I had to ask her to write a post about her stay.

I hadn’t even heard of ryokans when I went to Kyoto a few years ago. They’ve been on my list should I get a chance to return to Japan soon. If you’ve ever been curious or want to visit one yourself, enjoy!

What is a ryokan anyways?

A ryokan is often defined as a traditional Japanese hotel, but they are so much more than an eastern-style Holiday Inn.

Ryokans are often said to be the pinnacle of not only traditional Japanese hospitality but of hospitality, period. They are, without doubt, the best place to stay in Kyoto (or Japan at large) if you’re looking for a luxurious, traditional experience. 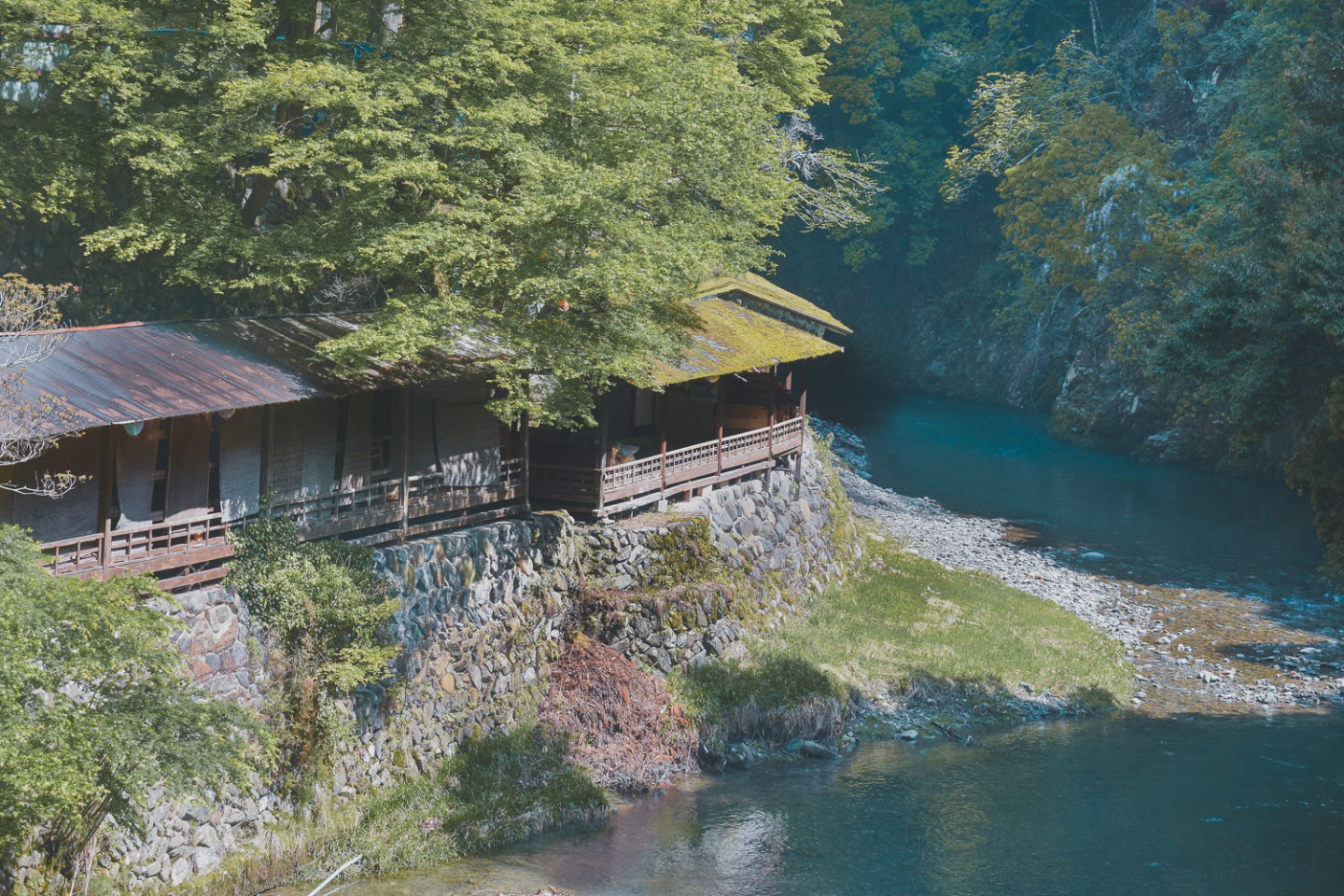 History of the Ryokan

Ryokans are a living time-capsules of a time long gone by.

They originated during the eighth century when Kyoto was still the capital of Japan, and Tokyo (then known as Edo) only a major trading city. As merchants, samurai, and others traveled back and forth between the two cities – which used to take rather longer than a  two-and-a-half hour Shinkansen train ride – ryokans popped up along the route to accommodate them.

Due to this long history – and the strong sense of family which permeates Japanese culture to its core – the two oldest hotels in the world are ryokans. They have both been operating continuously, passed down from generation to generation, for thirteen hundred years. 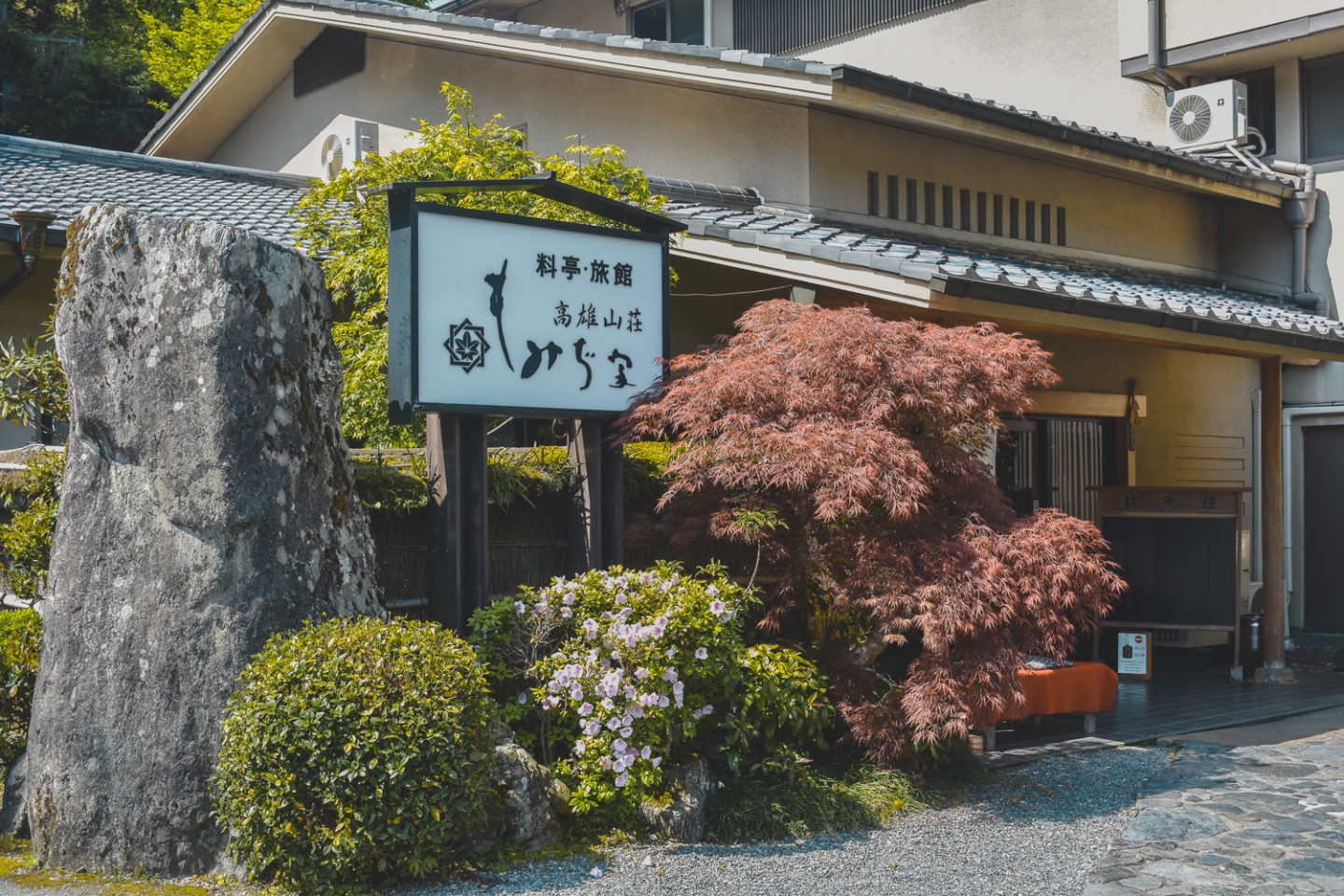 Staying at a Ryokan

The ryokan where I stayed at, Momijiya of Takao Kyoto, is a bit over a century old now. It’s nestled cozily in the bucolic hills outside of Kyoto next to a stream.

Honestly, there wasn’t a lot to do there except de-stress, and the staff working there made sure this happened as quickly and seamlessly as possible. 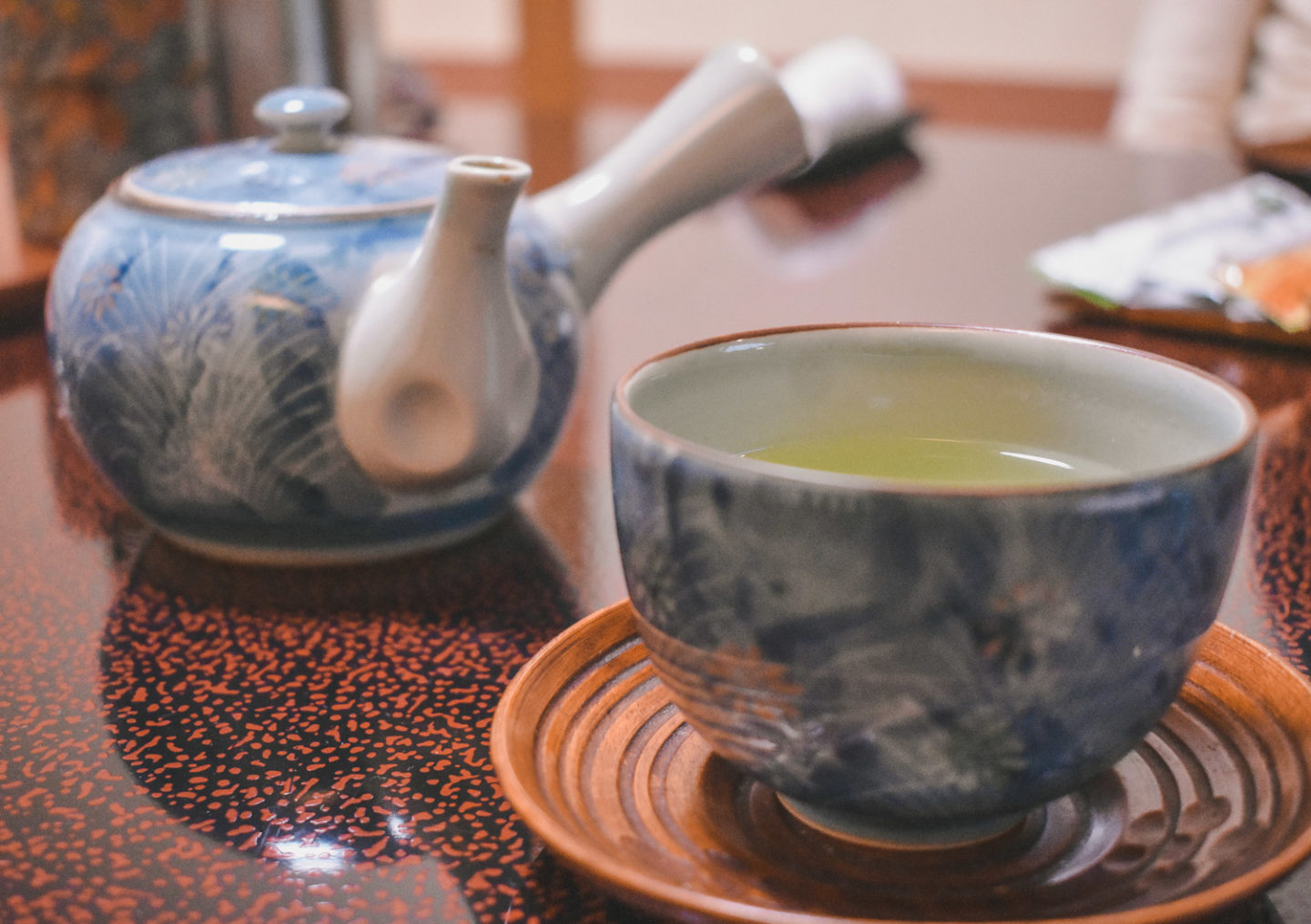 As soon as I arrived, my bags were whisked away and a fresh pot of green tea was made for me to enjoy while I looked around my room. It contained little more than a table, a couple of chairs, and a few tatami mats. Later, when I would go to dinner, some kindly fairy would place a futon – a kind of Japanese mattress – for me to sleep on. However, for now, the room was uncluttered and peaceful.

Ryokans encourage relaxation in the same way a retreat or spa might. If you go expecting to slam back tequila shots with strippers, you’ll be in for a bit of a letdown. 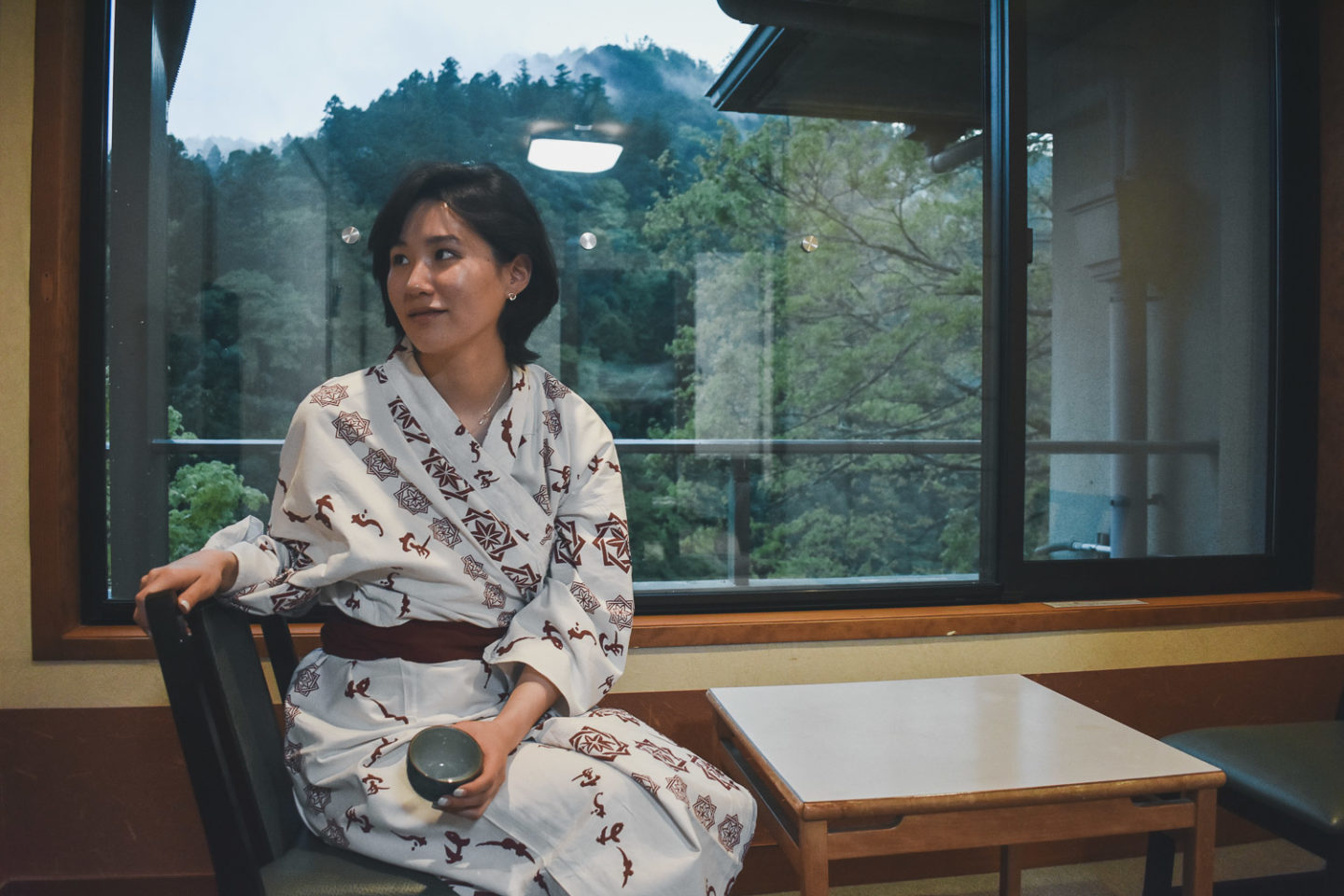 The outside world is completely stripped away, almost right from the start. I traded in my shoes for slippers and my clothes for a yukata, which are light cotton robes which can be worn everywhere in the ryokan from the public baths to dinner, and began to plan how I would spend my stay.

Wi-Fi was spotty, which I am suspicious might have been purposeful to encourage further disconnection from the outside world. The rooms were equipped with a television, but why would anyone choose that option when there are so many better ones? 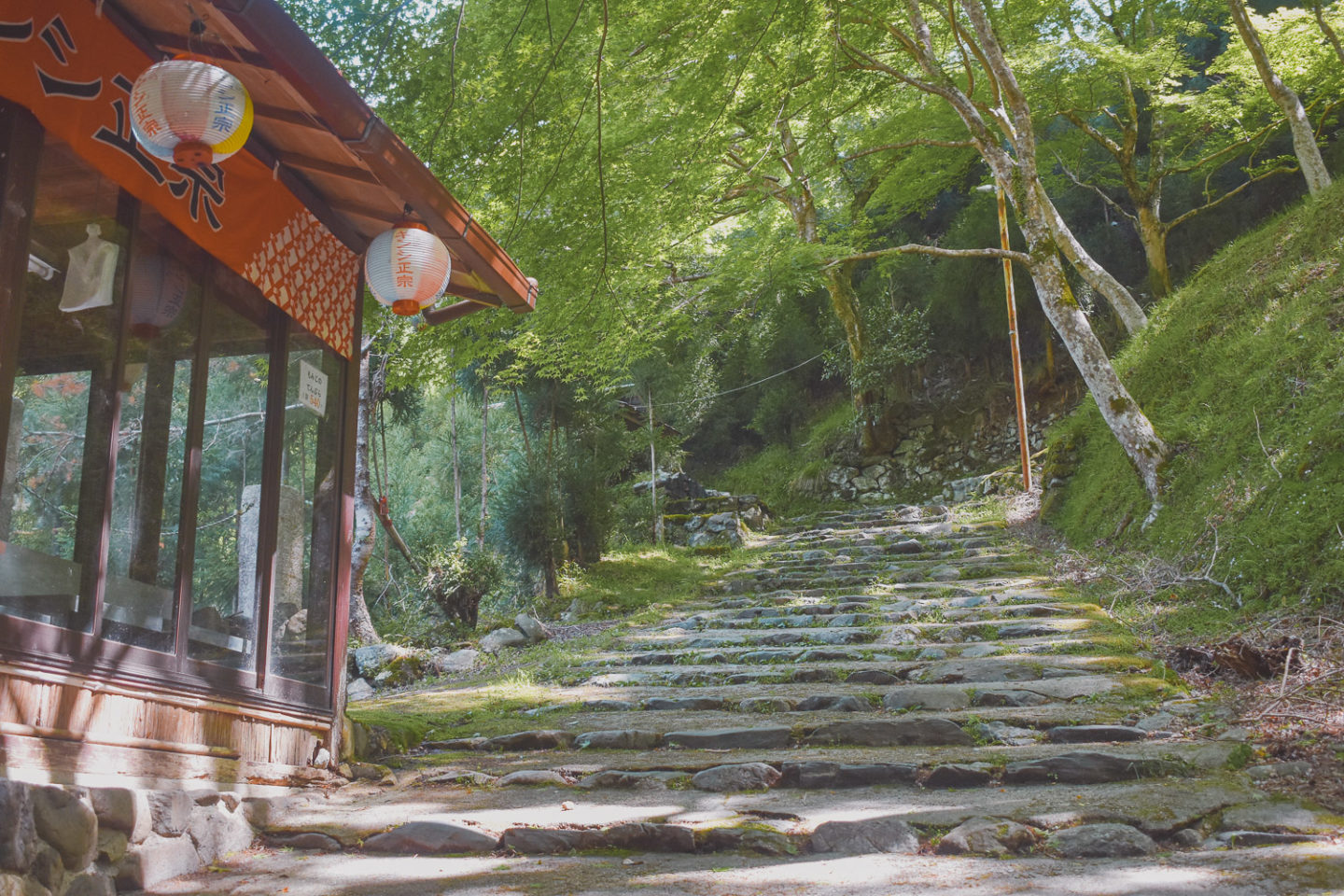 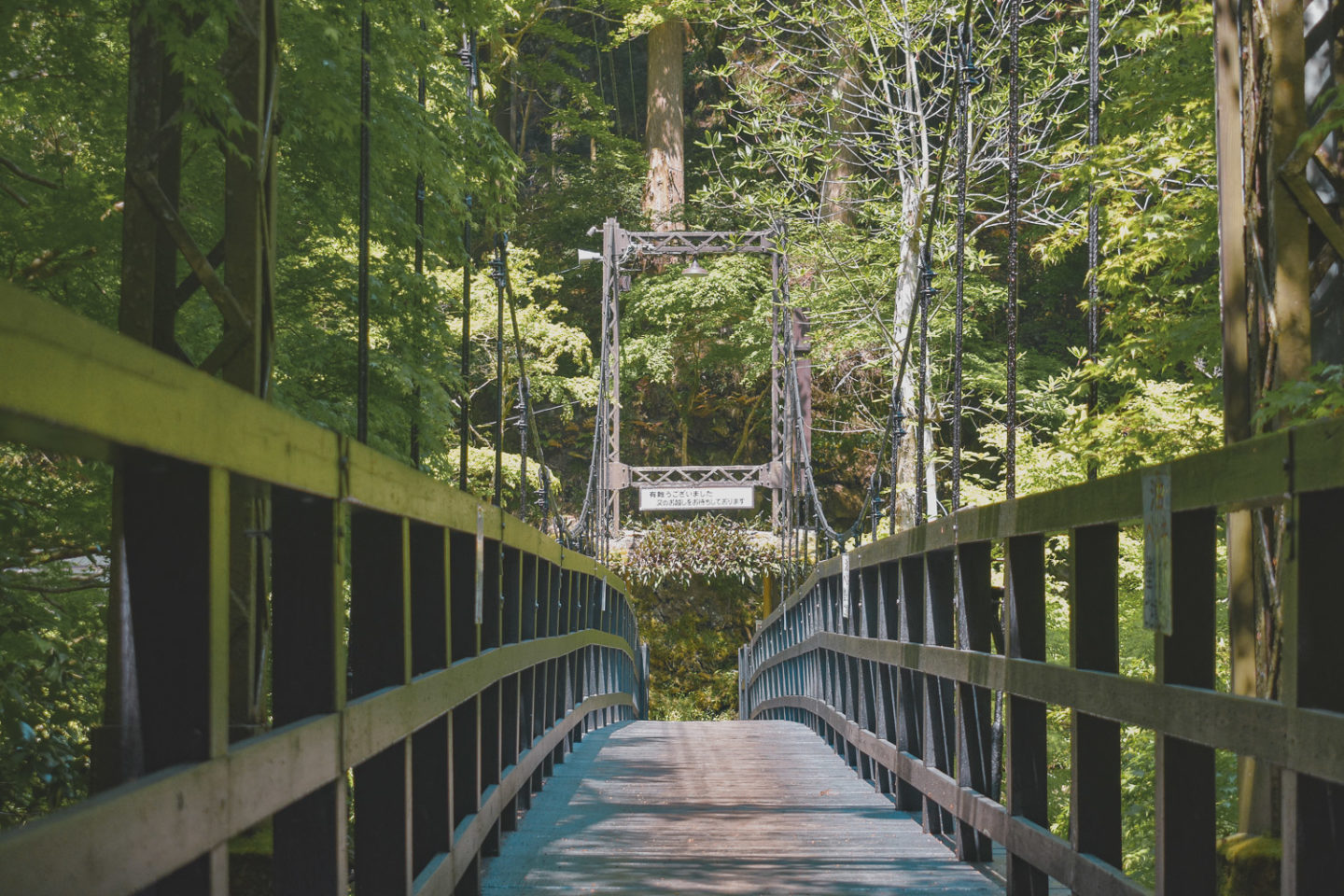 The remoteness of my ryokan and its stunning location meant that the grounds surrounding it are gorgeous, especially in the early springtime when I visited. Hiking paths snake through the forest around the ryokan, mostly sticking near the broad, shallow stream which runs through the valley between the low hills. It’s entirely impossible to hear nearby Kyoto, and it’s even dark enough that a few stars come out at night.

Taking advantage of the onsen

Most ryokans also offer onsen, which are baths fueled by natural hot springs. Public indoor baths – separated by gender – were offered with my stay, while a private, outdoor bath could be purchased separately for roughly $30 USD per hour. As I lost my modesty about public nudity long ago (and frankly, wasn’t willing to pay that much), I opted for the public bath.

I definitely wasn’t disappointed with my choice.

Even though this bath was technically inside, the windows slid open alongside the entire western wall, offering a panoramic view of the sun sinking below the mountains.

Unfortunately, cameras are very strictly forbidden as it’s a public bath, but believe me when I say it was incredible. 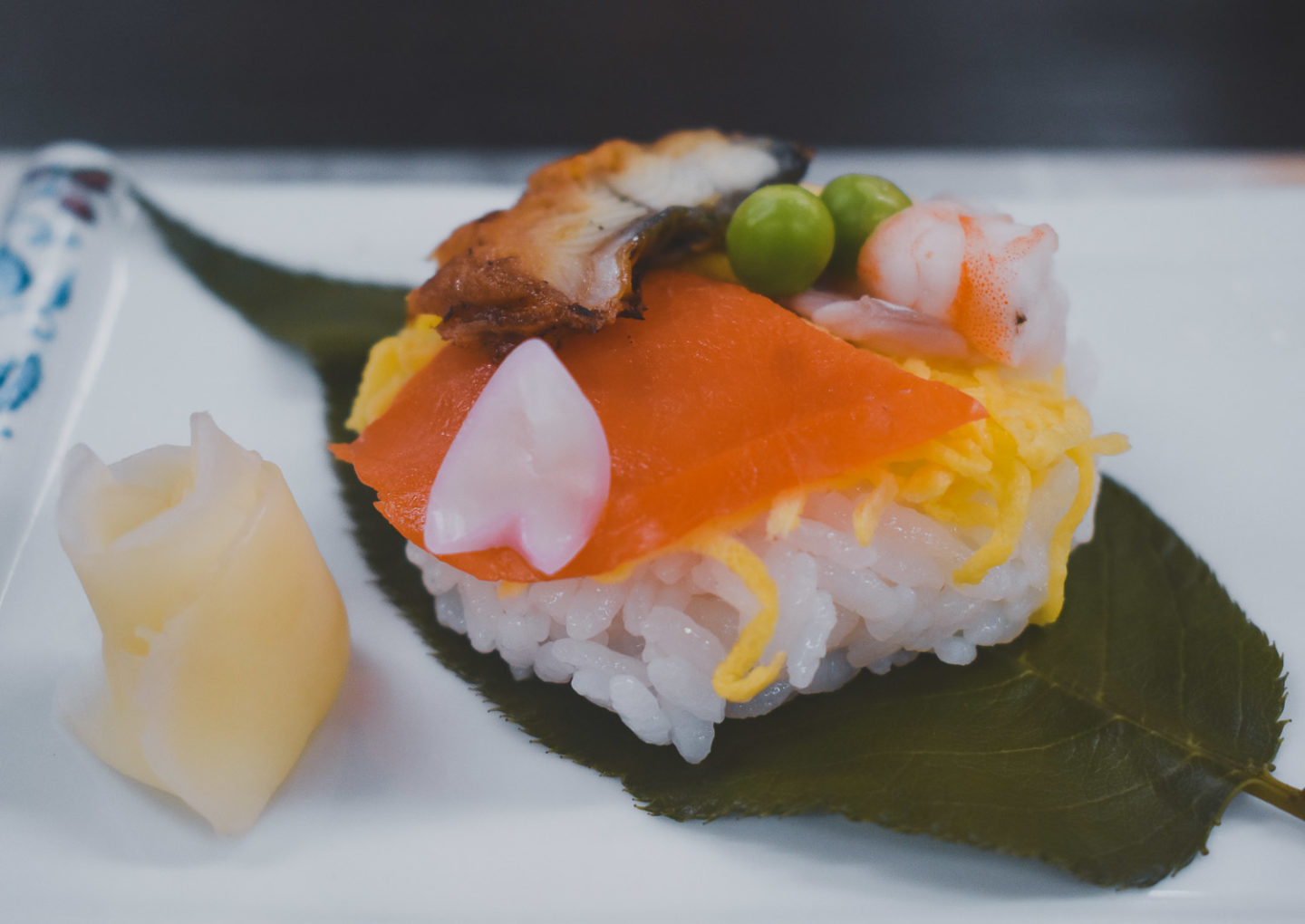 The caliber of the bath was equally matched by that of the food. Most ryokans advertise and pride themselves on their food. Mine was no exception. 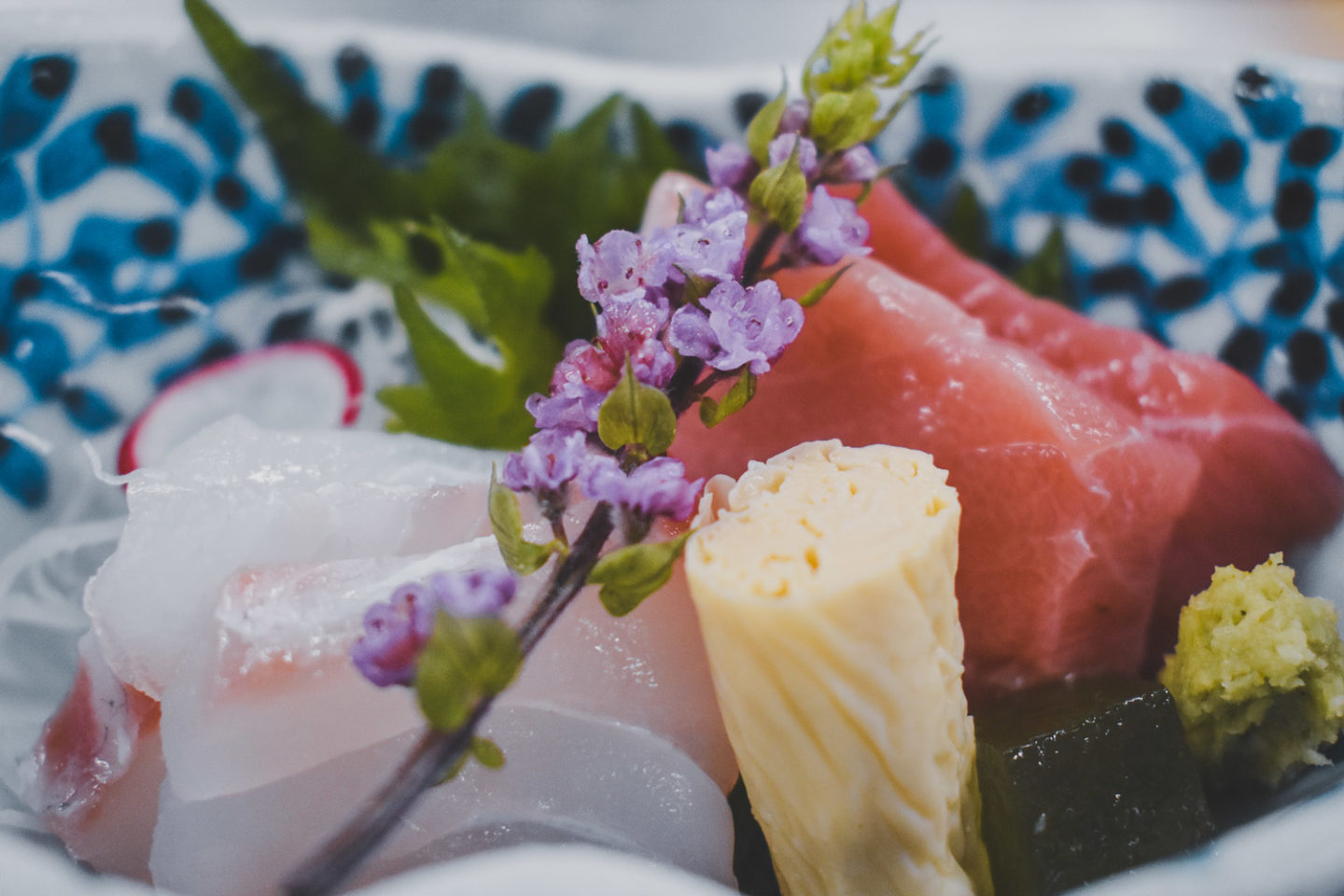 Japan’s reputation for its cuisine precedes it, and classic Kyoto, especially, offers a rich culinary tradition. Perhaps the epitome of tasting Kyoto is kaiseki ryori, a coursed dinner spotlighting fresh, local ingredients. This is exactly what my ryokan – and most ryokans – offered. 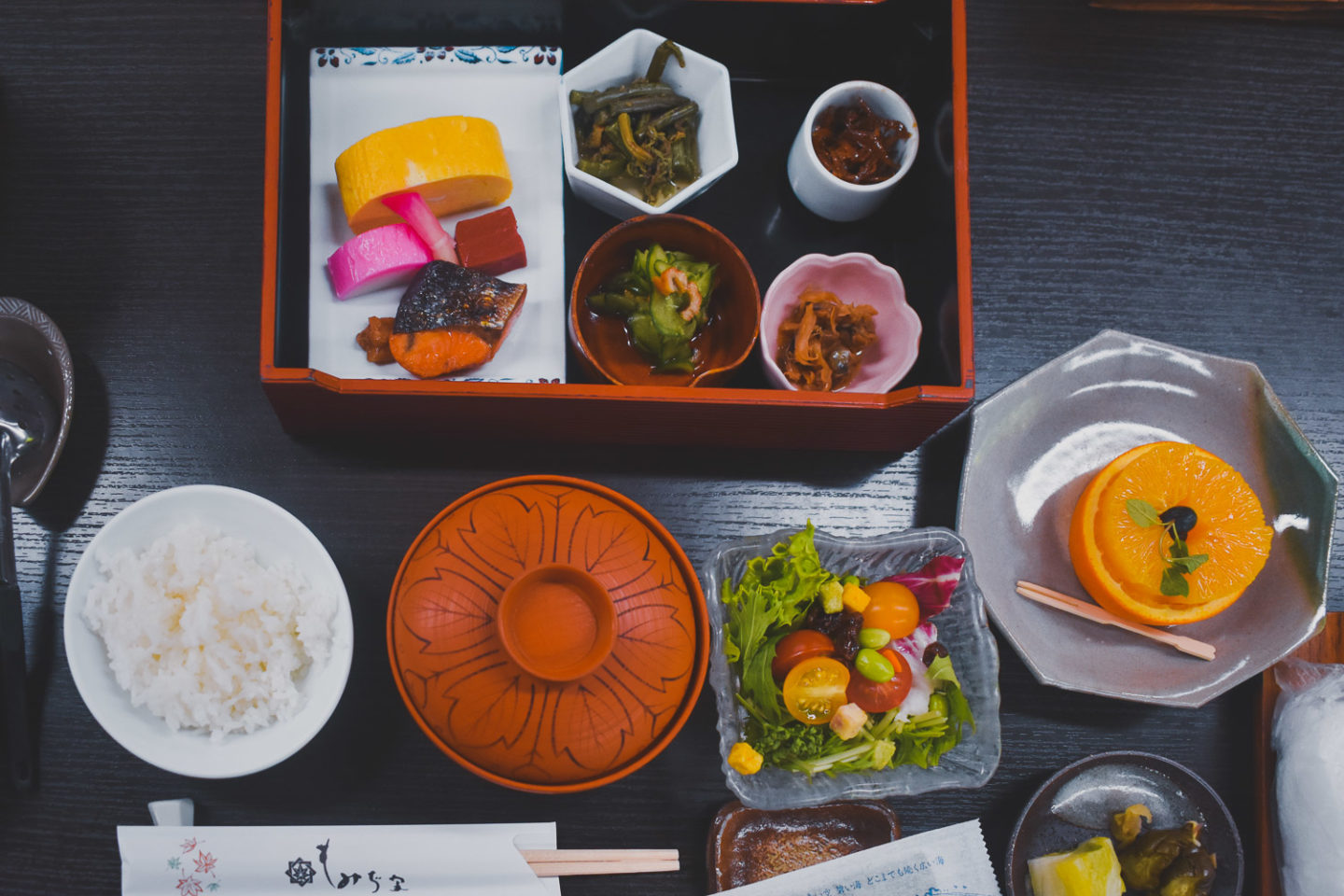 Breakfast offered in the morning was a much simpler, yet still elegant affair. Pickled vegetables and fresh fish accompanied rice, miso soup, and a salad. A pot of tea accompanied breakfast, and coffee was provided (for free!) when I asked for a cup.

When the time finally came for me to leave, I changed back into my normal clothes from my yukata, traded in my slippers for my shoes, and boarded a shuttle back to Kyoto.

Even though the physical elements I had received during my stay were gone (except my mini-potbelly I had gotten from eating so much), my mind felt as clean and relaxed as my body had during my onsen bath.

If you ever have the chance to travel to Japan, I can’t recommend staying in a ryokan highly enough. 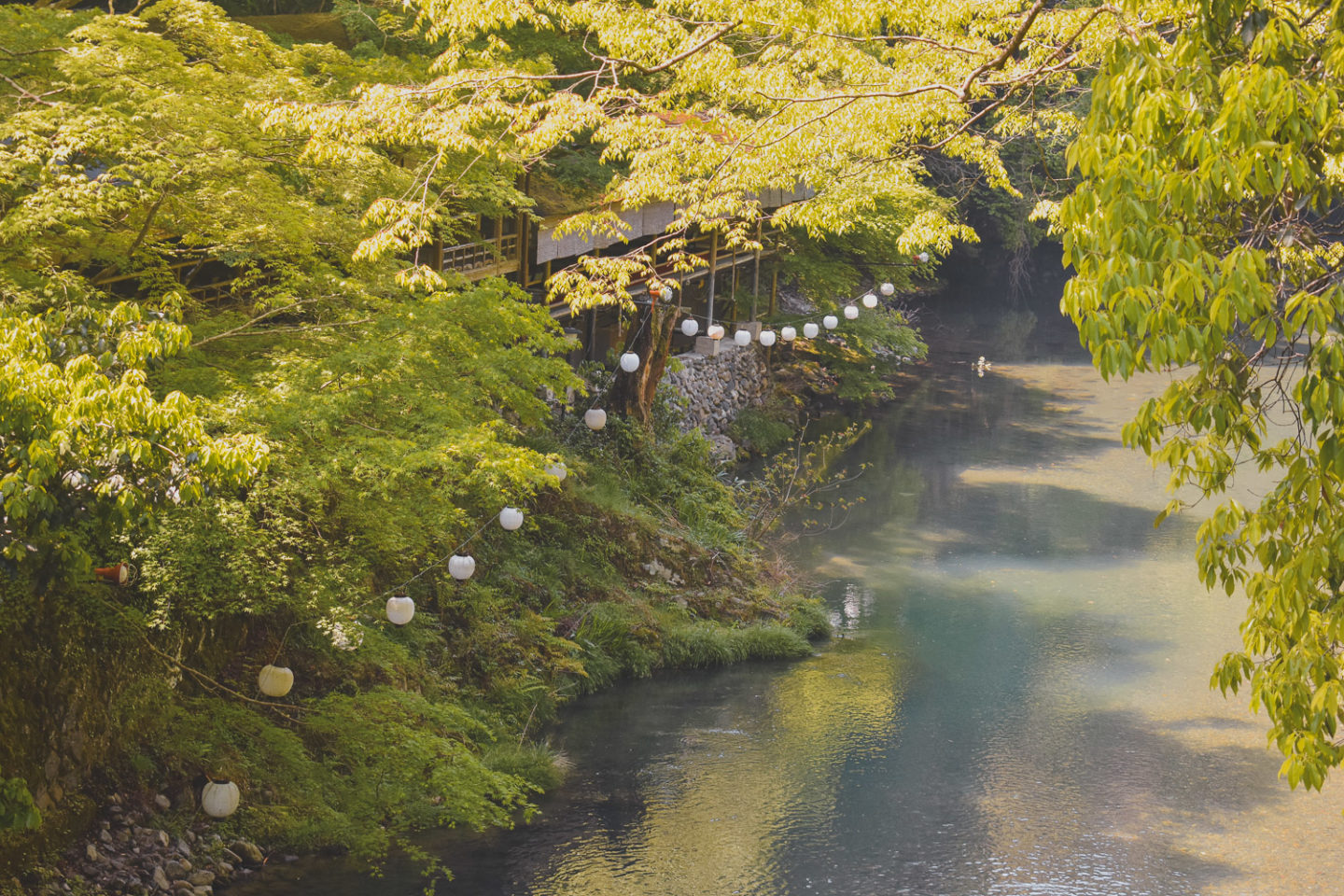 Use Your Inside Voice

Ryokans are supposed to be relaxing for everyone, so make sure to keep the volume down. Like your mom always told you, make sure to use your inside voice.

Remember a ryokan is an all-inclusive experience.

This means that quite literally everything you could want is provided. I was given robes, socks, and slippers to change into upon arriving. There were toiletries in the bathroom, and towels to use in the public bath (though I had an incredibly deep bathtub of my own in my room, albeit without a window.) Breakfast and dinner, as mentioned, were both provided as well. 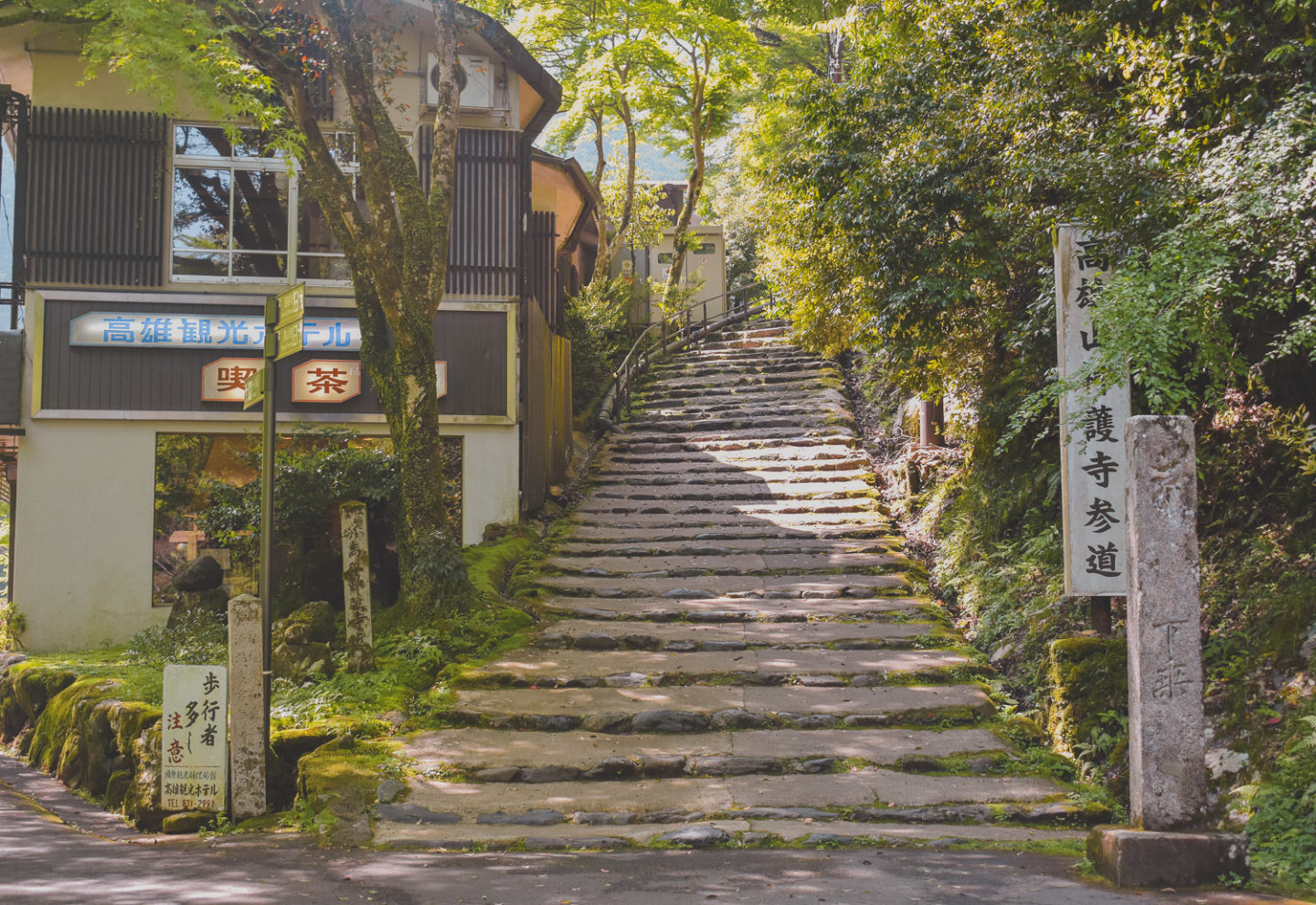 Of course, knowing basic Japanese etiquette is important. For example, make sure to tie your yukata with the left side over the right. The other way around is reserved for the dead!

As with most places which are not-America *cough*, wearing shoes indoors is a major faux-pas. You’ll get slippers instead.

Shower Before You Go to the Onsen

If you’re going to take advantage of the onsen (bath) make sure you shower before entering! Baths are strictly reserved for soaking after you’ve already cleaned yourself. 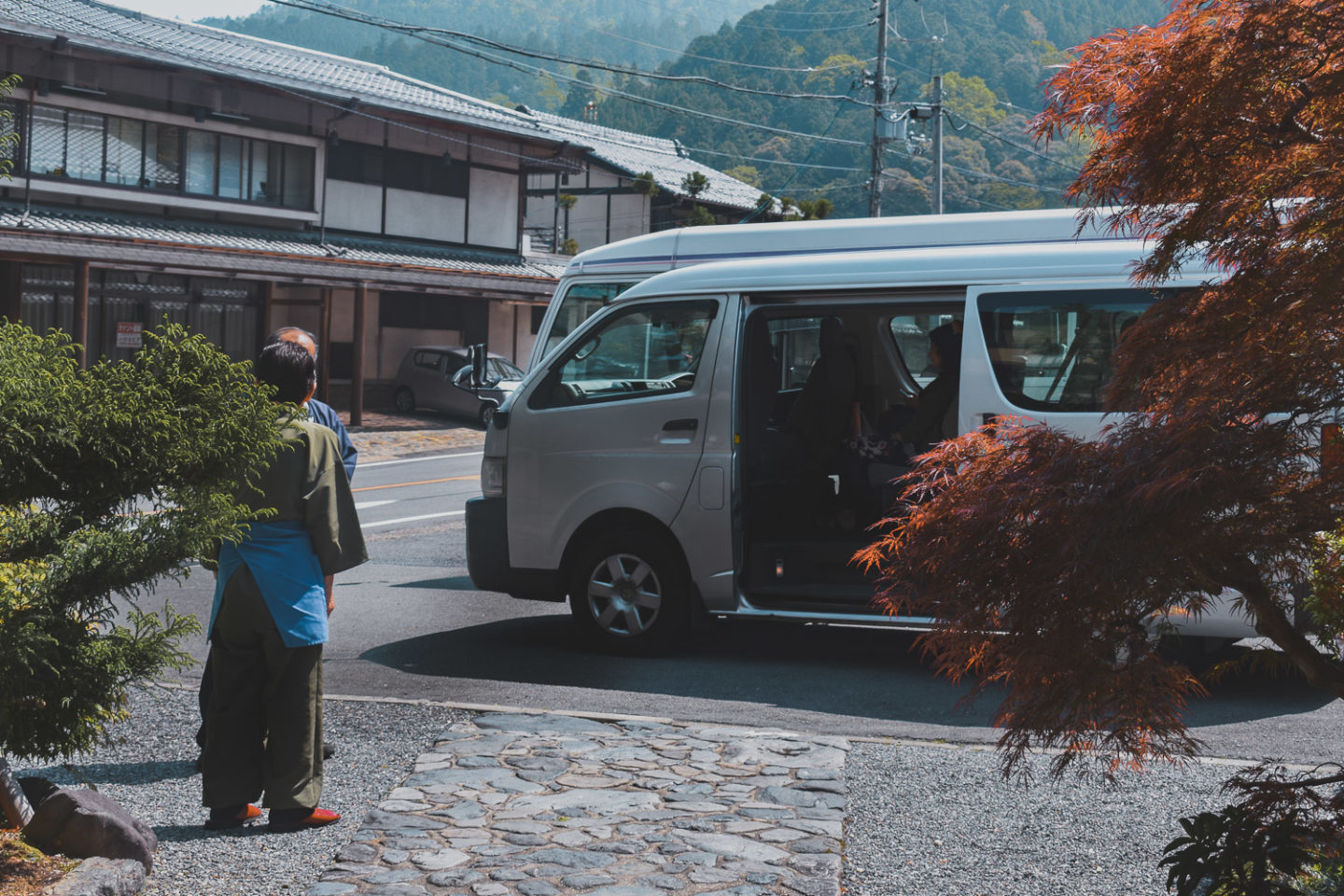 Momijiya is pretty remote, so I would really recommend taking the free shuttle service offered by the ryokan.

Free shuttle service from the following stations to the hotel are available upon request. There are a few options:

For More Posts on Travel in Japan 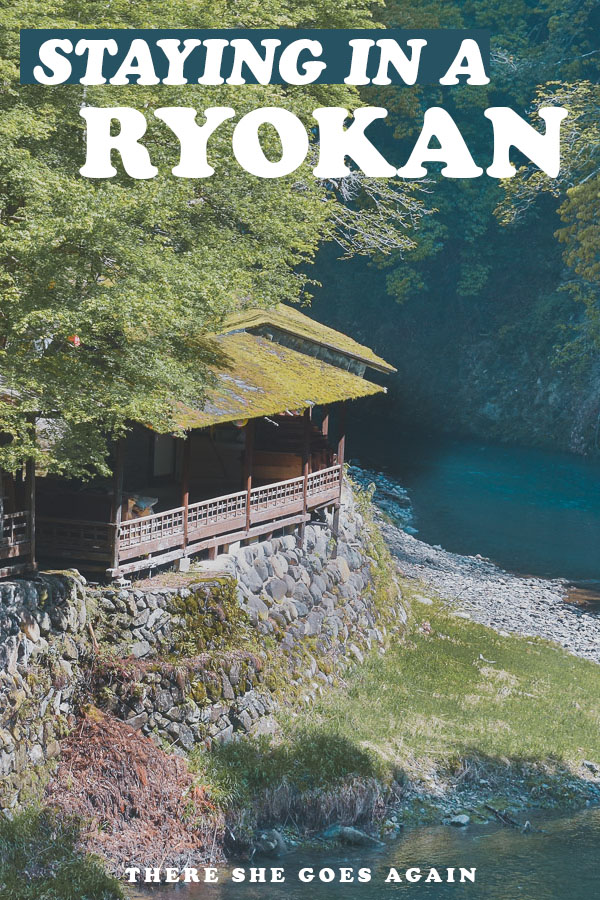