Japan has got to be one of the most beautiful countries I’ve ever visited in all my travels. I think you’ll find most ESL teachers in Korea fall a little in love with our next door neighbor. There’s a serenity to the country, even at its busiest hours or craziest crosswalks. Every corner has something photogenic, and people will politely stand in line to let you get your shot. Nicole and I gathered our favorite photos from our individual trips in order to inspire you to visit Japan and see its beauty for yourself.

When I went, it was over a long weekend in May. Since we only had a few days, my friend, Lynsey, and I stayed in Kyoto the whole time in order to see all we could see. Nicole has been a few times, though her photos are all from her trip this past summer where she went to Tokyo, Kyoto, and Osaka. Guys, she even took two days to hike Mt. Fuji instead of just seeing it from afar! We hope you enjoy the photos and they inspire you to book that ticket to Japan for your own holidays!

20 Photos to Inspire You to Visit Japan

1. Monkeys in Arashiyama, Pt. I

This is a Japanese Macaque, more commonly known as a snow monkey. They’re native to Japan, and they got their nickname they live the furthest north and in the coldest climate of any other non-human primate. While the more popular option is to go to Nagano to visit the Snow Monkey Resort, you can also see them by heading to the Monkey Park Iwatayama in Arashiyama.

The park where you can see them is open 9:00 a.m. – 5:00 p.m. (depending on the season), and when you get to the top you’ll have beautiful views of Kyoto. You can also feed these guys in the designated hut in the Viewing Platform. The main website for the Monkey Park has a ton of information to make sure the monkeys stay protected and healthy.

3. Calm Along the River

Not much to add except for how much I’m loving the greens in this photo.

There really is nothing like walking through a bamboo forest. Something about the atmosphere is unendingly calm, even if you’re sharing it with hundreds of other people. I’m pretty sure everyone I know made a trip to the bamboo forest while in Kyoto.

For all the calm photos of Fushimi Inari, you’d be pretty surprised to discover just how difficult this shot is to get. If you go earlier or plan to climb the whole way, it’s probably much easier, but when I went it was incredibly crowded. And we were there in the rain. However, it is a stunning shrine, and you might just recognize it from a certain movie.

Definitely something to consider doing! It’s about a two-hour walk up, and Nicole has done it twice so far. Actually… Now that I think about it, I’m pretty sure I’m the only lazy one of my friends who didn’t even try hiking halfway up Fushimi’s trails….

7. Friends Dressed Up for Kyoto 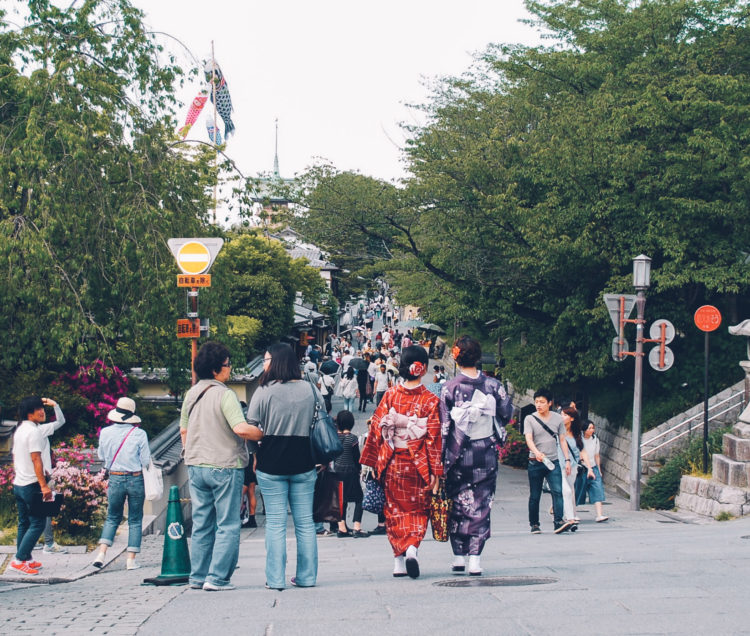 I was going to call these kimonos, but I think they might actually be Yukatas. Anyhow, this is one of those photos I took by accident while we were figuring out where to go next, and it’s still one of my favorite shots from Kyoto (you can see my old edit of it here). I just love the idea of two friends dressing up juxtaposed with a mother and daughter probably debating where to go next.

8. Kyoto, Home to Hundreds of Shrines 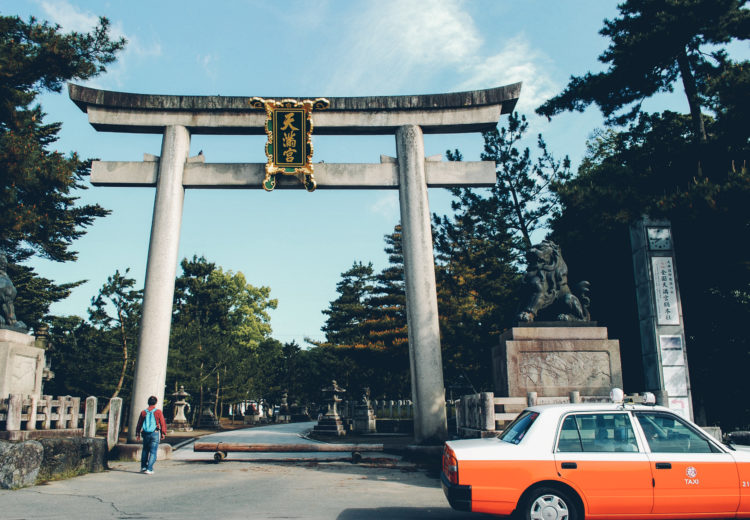 Did you know Kyoto is actually quite famous for its shrines? As one of the few places left untouched by WWII, it’s probably the best place to see traditional Japanese architecture. Everywhere we went, we stumbled into a shrine or temple of some sort. This area was right near where we stayed, and of course, I cannot for the life of me remember its name! Our Airbnb listing is no longer available, but I remember it being pretty far from the city center and in the general direction of the Ginkaku-ji, the Silver Temple.

They say the best place to find geishas is in Kyoto’s Gion district at night. It’s also just a beautiful place to hang out as the sun sets! My friend, Lauren, opted to stay here while she was in Kyoto because it has a lot of restaurants and shops in addition to the teahouses where geishas entertain.

Nearby, sits Yasaka Shrine. It dates back to 656 AD and is considered one of Japan’s most important shrines. 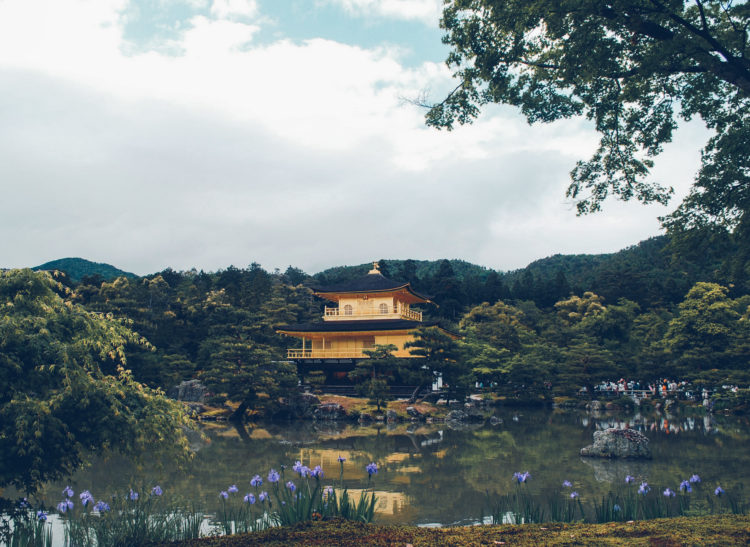 Definitely one of my landmarks in Kyoto. The gold really does glitter, and we were there right before it began to rain. Don’t mistake Kinkaku-ji for Ginkaku-ji, the silver (though not actually silver) temple.

Another place you might recognize from said movie in #5. Kiyomizu-dera is a Buddhist temple founded around 778 AD. While it’s definitely one of the most touristy places in Kyoto, you won’t want to miss walking around its grounds. Apparently, there’s a stone that will grant your wishes, but try as Lynsey and I did, we never found it. 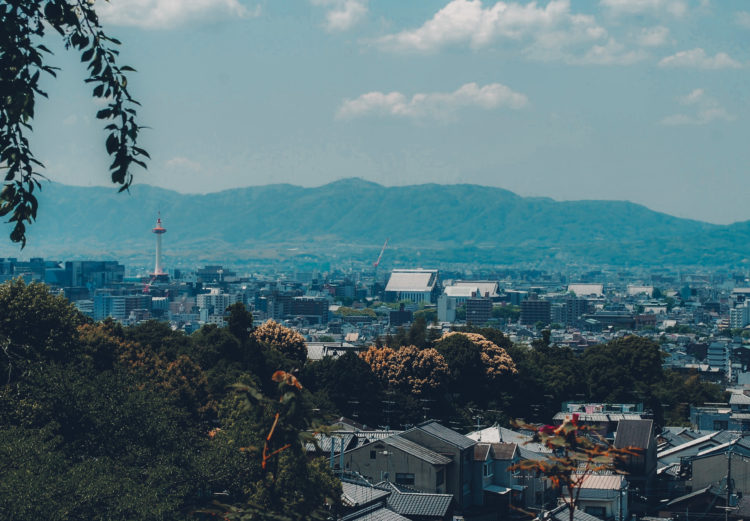 Kiyomizu-dera also offers the best views of Kyoto’s skyline. Again, even though it can get pretty crowded on the temple grounds, everyone was really polite and would wait in line to get their shot. 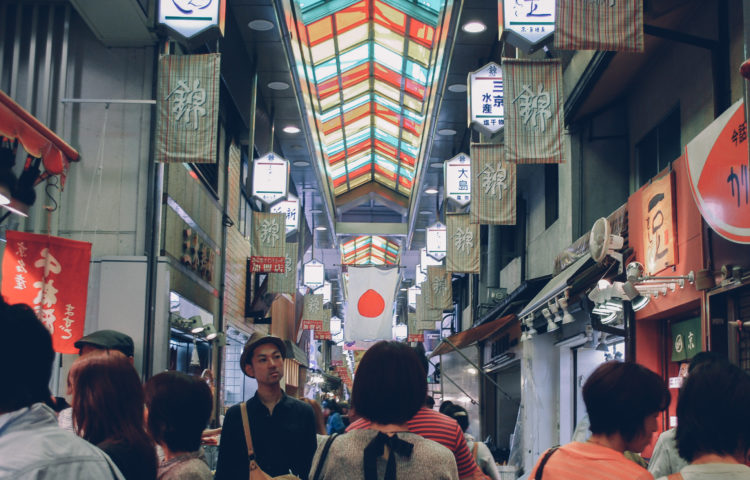 Be sure to stop by the Nishiki Food Market. I’d definitely recommend spending your morning or afternoon wandering around the stalls and trying all the food. I waited too long to go and wound up having to squeeze it in before we had to catch our flight!

Sannen-zaka is one of Kyoto’s best-preserved streets along with Ninen-zaka. They’re pedestrian only and filled with traditional storefronts. Also, photographers, you’ll be pleased that there are no power lines to mar the view.

Considered to be messengers for the Shinto gods, over a thousand deer roam around Nara Park. While no longer considered divine, Japans till considers them national treasures and thus reveres them as such. They’re incredibly relaxed, though they do get excited at the prospect of food!

17. View of Osaka from the Tempozan Ferris Wheel

For a beautiful view over Osaka Bay, take a ride on the Tempozan Ferris Wheel. You’ll also be able to get views of Osaka’s skyline and nearby mountains.

Kobe Animal Kingdom started out as a bird and flower park, and now it has a range of animals. From what I’ve read and what Nicole researched beforehand, Kobe is an ethical place. While it’s designed for interactions, and Nicole was a bit peeved at kids that got too handsy and blissfully unaware parents, the animals are treated well and given plenty of room in their habitats. However, please feel free to correct me if I’m wrong!

Most people go and enjoy Mt. Fuji from afar, but have you ever considered hiking it? Nicole did so with her boyfriend and friend, and I’m still not quite convinced I’d be up to the adventure!

If you’re on your way up to Mori Tower for the Studio Ghibli Exhibit in Roppongi Hills, be sure to pause and take in a particularly gorgeous view of Tokyo Tower! Nicole wasn’t expecting such a stunning view, and now it’s made the list of her favorite photos from this trip.

So, ready to book your ticket? I know I definitely want to go back and give myself time to explore the country more in depth. To make your life easier, I put together a little Google Maps so you can see where all these sights are in relation to one another.

For these photos, Nicole used a Sony Alpha A7RII and I used my Nikon D40x. We both edit using Lightroom and have our own editing processes that we bounce off of each other. I know I start with VSCO presets and then work from there.

Let me know! What are some of your favorite views of Japan? 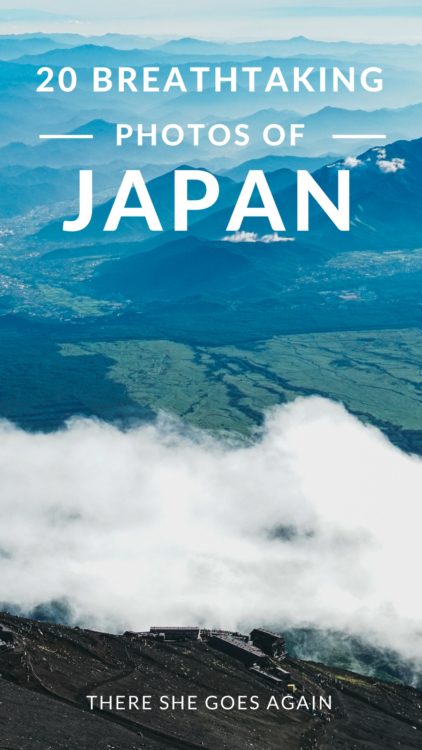