Wondering what to eat in Morocco? After almost 3 weeks of traveling through the country with my foodie pal, Autumn, I thought I’d compile a giant list of all things we ate while here!

If there’s one thing I can say about Autumn, who you guys may recognize from her posts here and here, it’s that she is a major foodie. I don’t think I’ve ever met someone who loves food and finding new things to eat as much as her. I knew she wouldn’t let me slide by just eating random junk and the occasional cheap sandwich during our trip. While I took over the bookings and general itinerary planning, she figured out which Moroccan dishes and drinks we should try.

What she found is basically all below in what to drink and eat in Morocco. I think we did a pretty good job over all making sure we tried different things and didn’t overdose on couscous and tagine alone. Hope this helps you with the foodie part of planning your own Moroccan trip!

What to Eat in Morocco 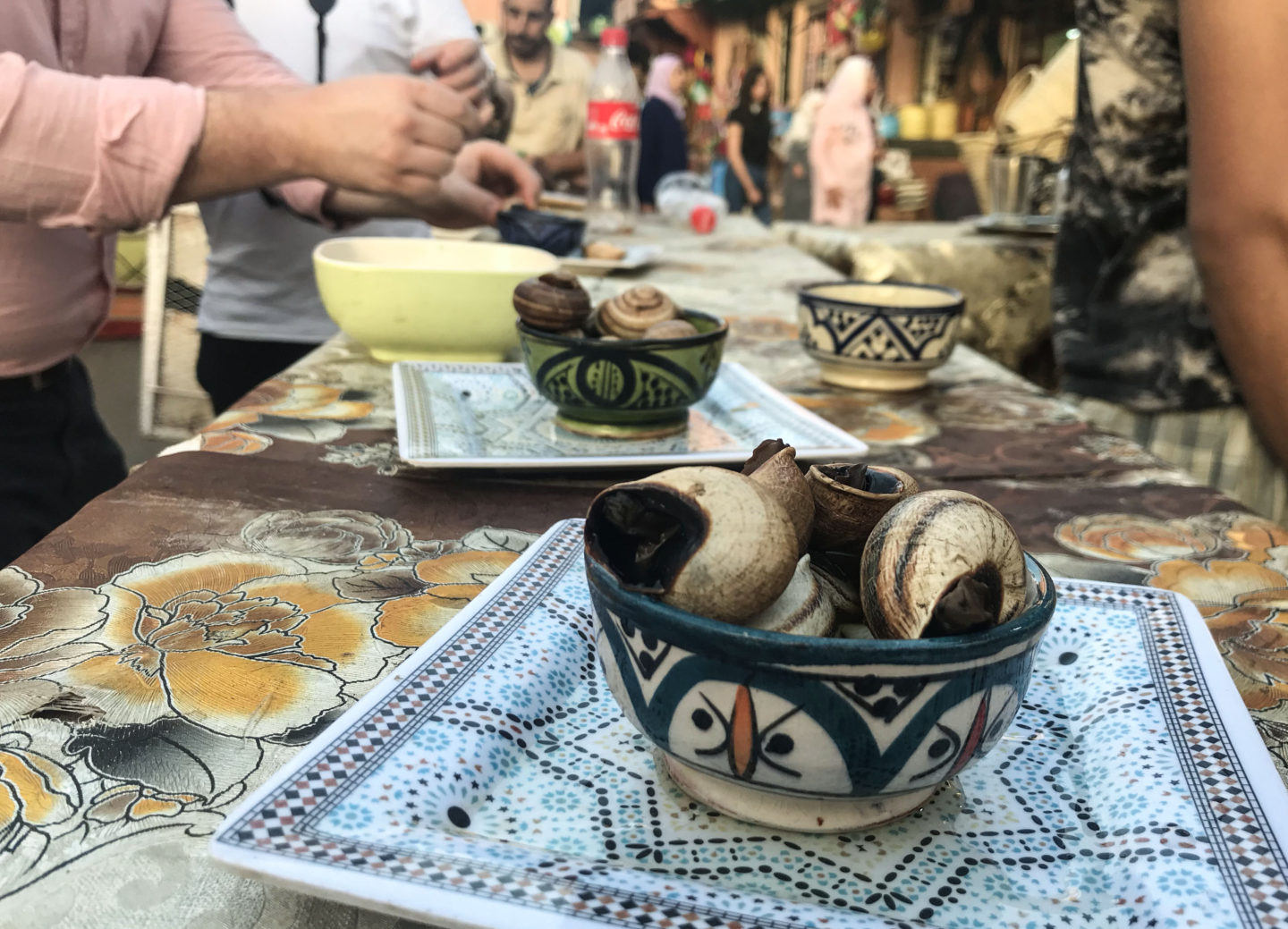 Snail soup, heyyyy! We were lucky enough to be gifted a ticket for one of Marrakech Food Tour’s evening food tours, and this was one of the Moroccan dishes we tried. I actually quite liked it. Use a toothpick to eat the snail bits from the shell, and sip on the broth. It’s quite salty, just a warning! 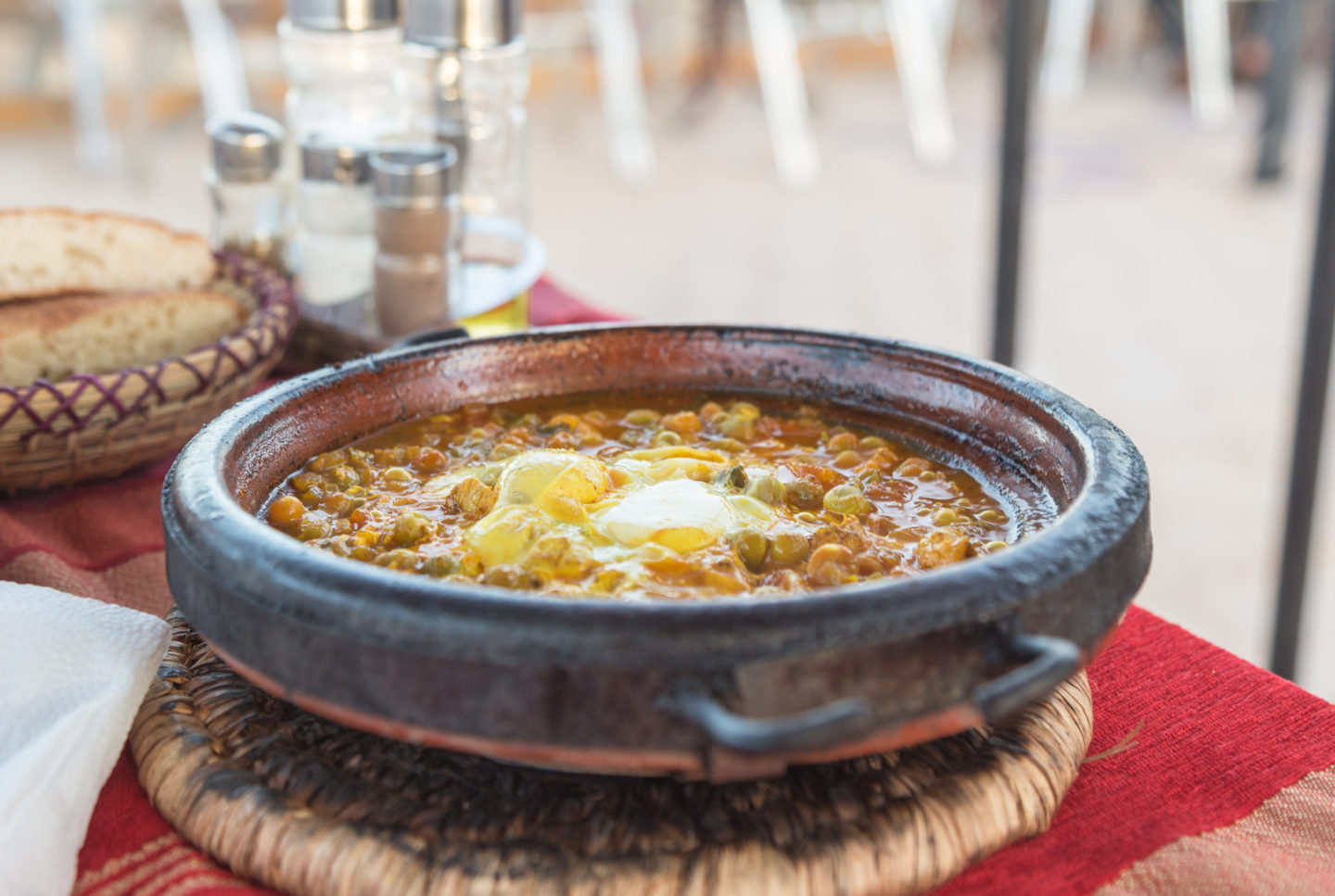 We had this quite a few times for breakfast, and it’s definitely one of my favorite dishes. Eggs in general are one of my favorite foods, so this was an easy win for me. Berber omelettes are kind of like shakshuka but a bit different. You cook it in a tagine with poached eggs, tomatoes, onions, peppers, and spices. 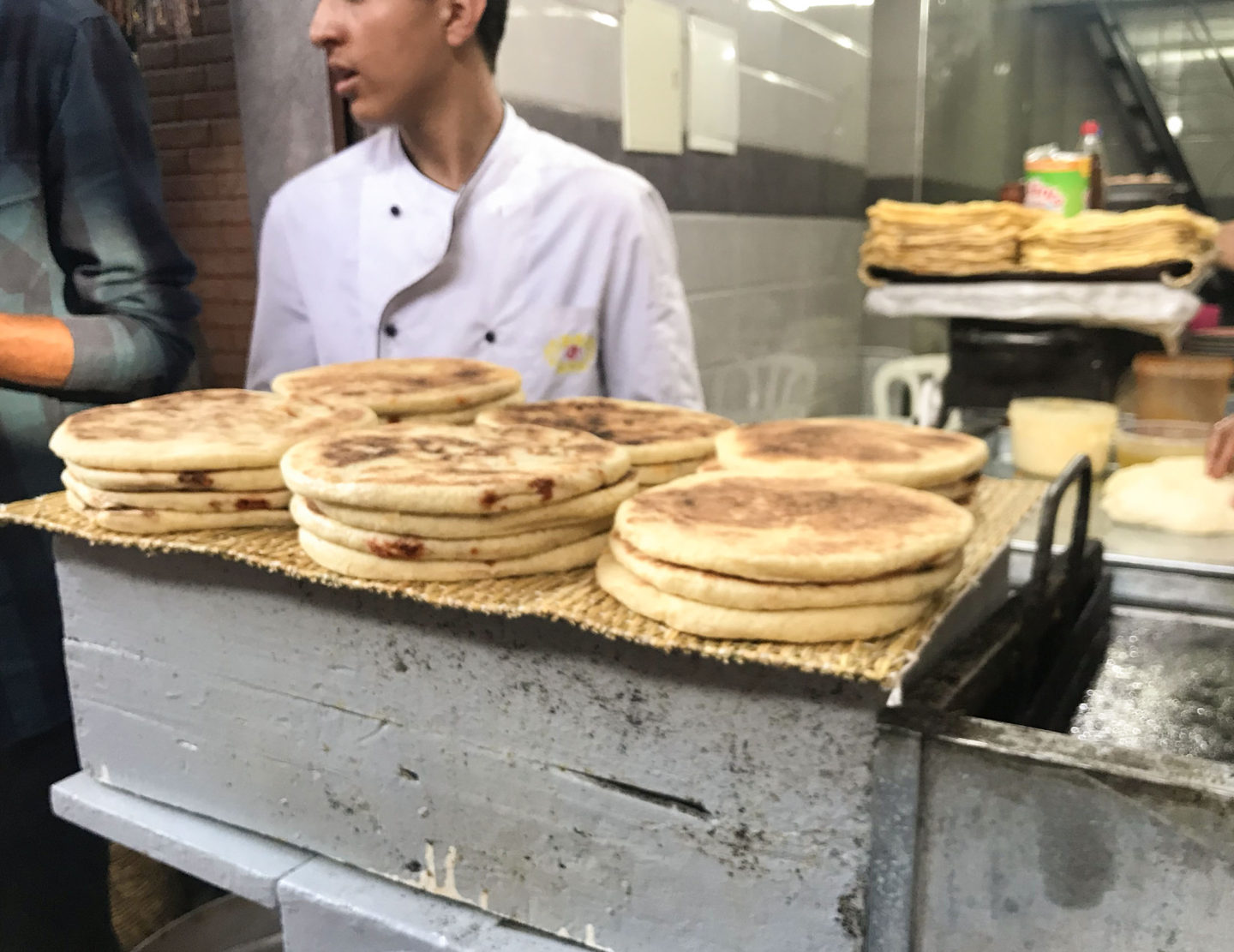 We also got this on our food tour. It’s basically a thin, round bread made with a filling of spices and onions. We ate ours rolled up, but usually it’s served flat and cut into triangles — like a pizza! 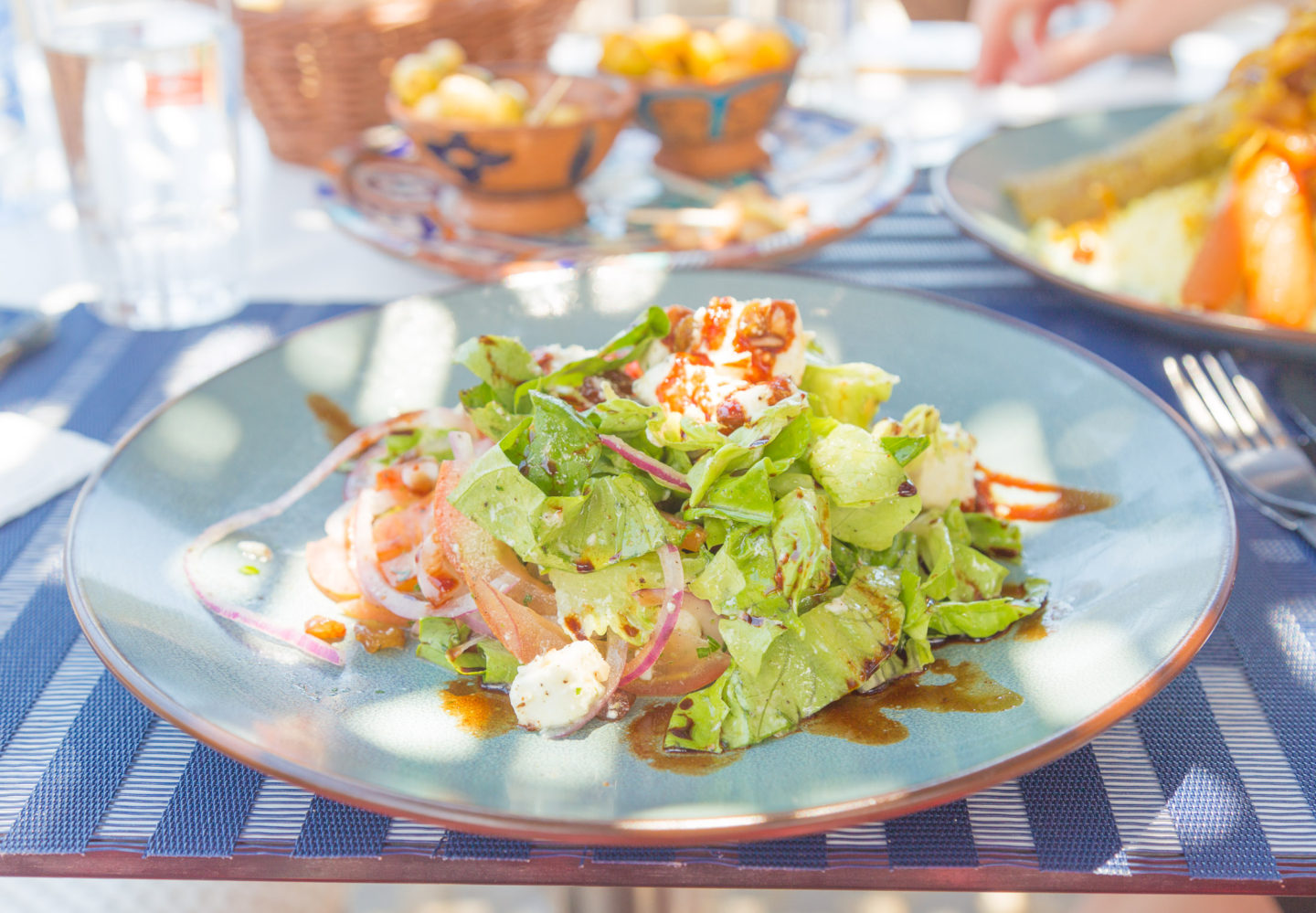 This one is random, and not necessarily Moroccan except for the fresh goat cheese! I don’t know how to describe it, but Silvia from Heart My Backpack really loved it, so I decided to try it while we were in Chefchaouen. Autumn refused to eat it because she was still worried about the tap water in Morocco, but our waiter told us the tap water there was safe since it came directly from the Rif Mountains. I was fine eating it, and it was as good as Silvia said in her post! 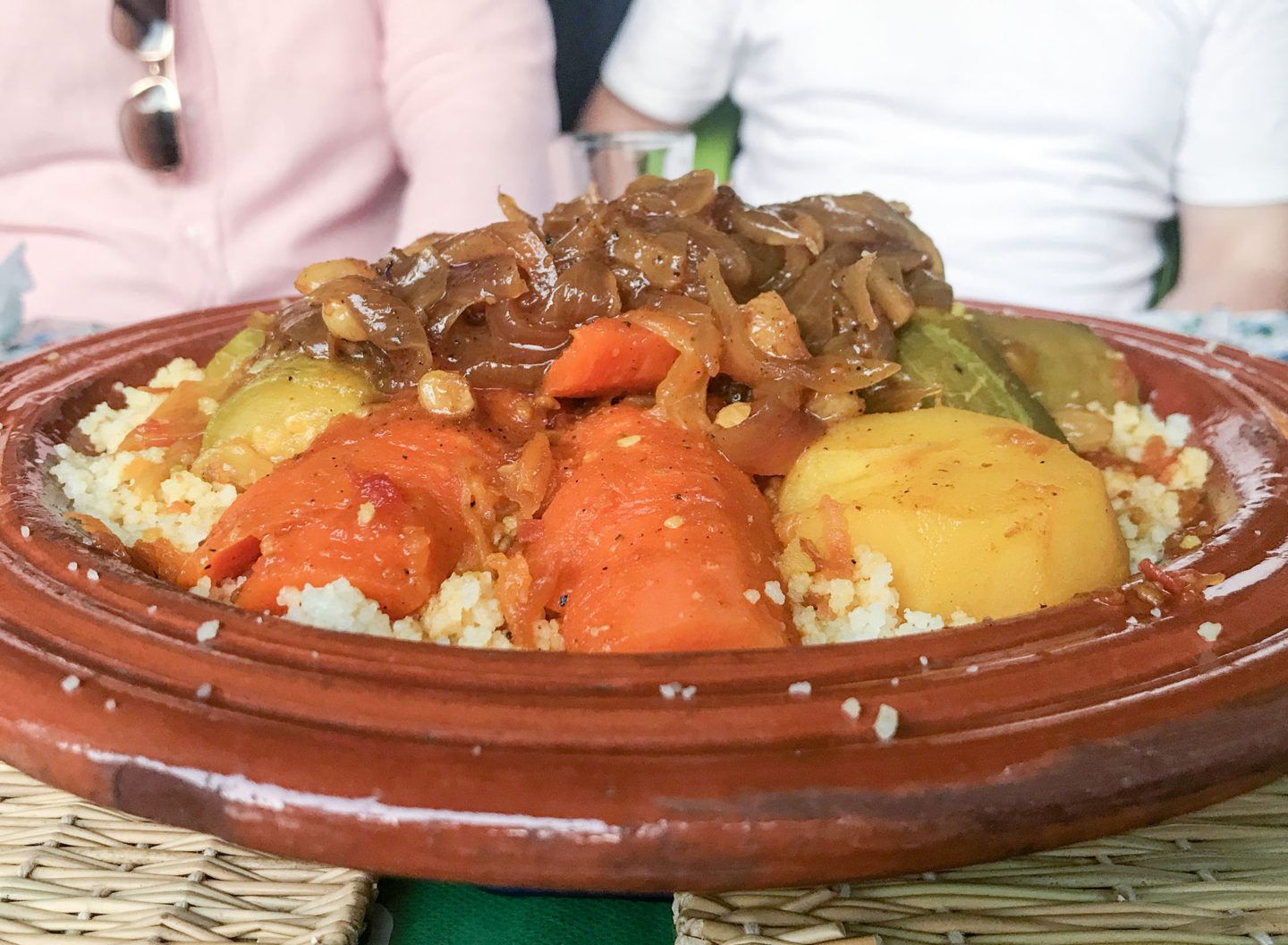 Ahhhh couscous — if you went to Morocco and didn’t have couscous once, what were you even doing here?! We probably ate this in every city we visited in Morocco, and it’s definitely the most filling dish on this list. I think my favorite is from a place in our food tour. Their couscous actually takes two hours to make the way they do it, and you can tell with all the flavors! Our favorite part of the veggie couscous were the onions, though. As Autumn said, “Morocco really knows how to treat an onion.”

P.S. We were going a bit bonkers at one point on our trip and wound up looking up couscous songs. This one was by far our favorite and we sang it at each other constantly. Enjoy this Grammy-deserving masterpiece. 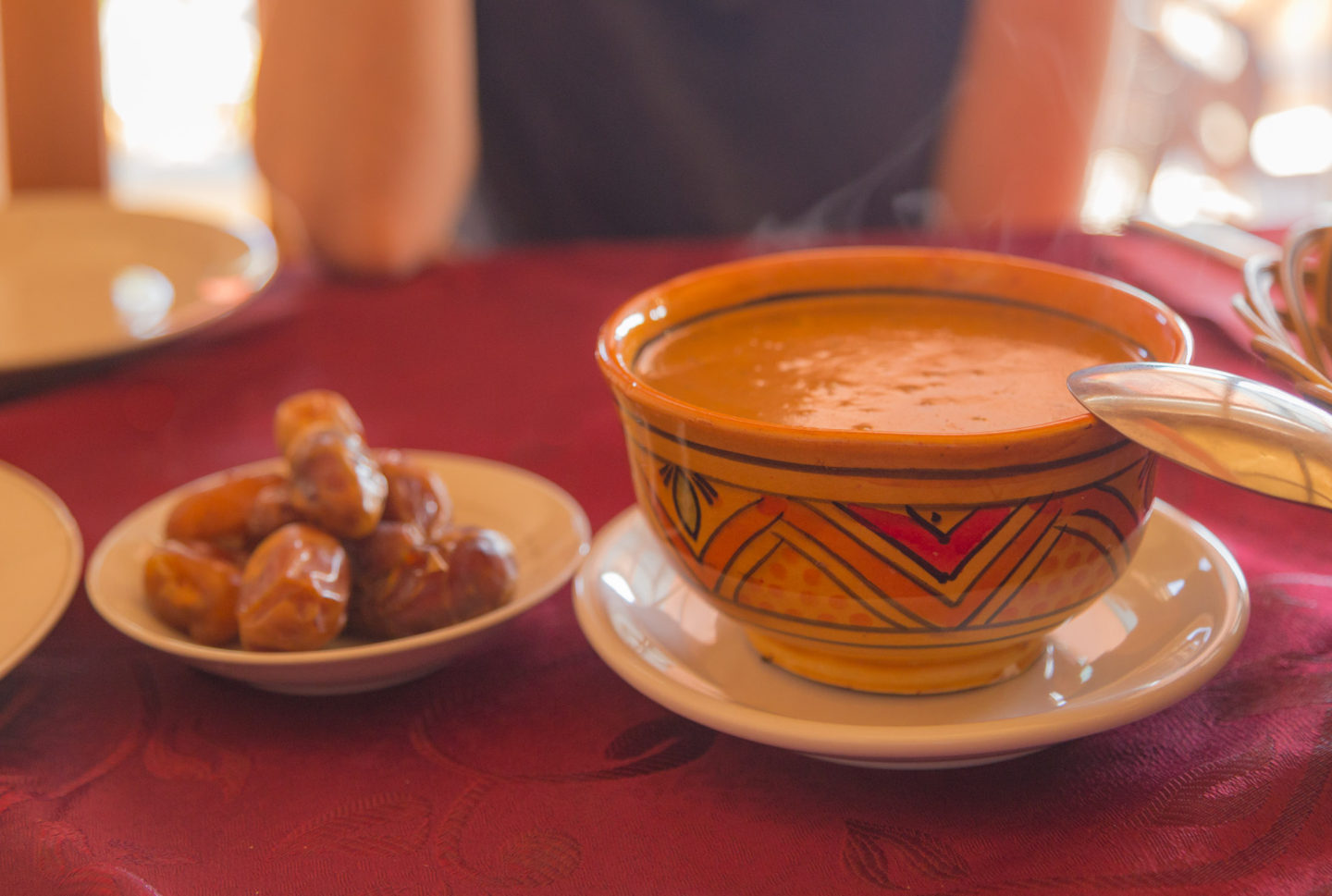 Love a good medjool date! We got these a lot as little side dishes or as a part of our breakfast meal. They’re so abundant in Morocco! Which is kind of funny because I remember desperately searching for them in Korea before ordering them online. If you’ve never had a medjool date, they’re this delicious, sweet but healthy fruit. I put them in smoothies, make raw bars with them, and just put some peanut butter in the middle and pop one in my mouth. They’re found the most in the Middle East and North Africa, which is why Morocco is such a great place to get your fill! 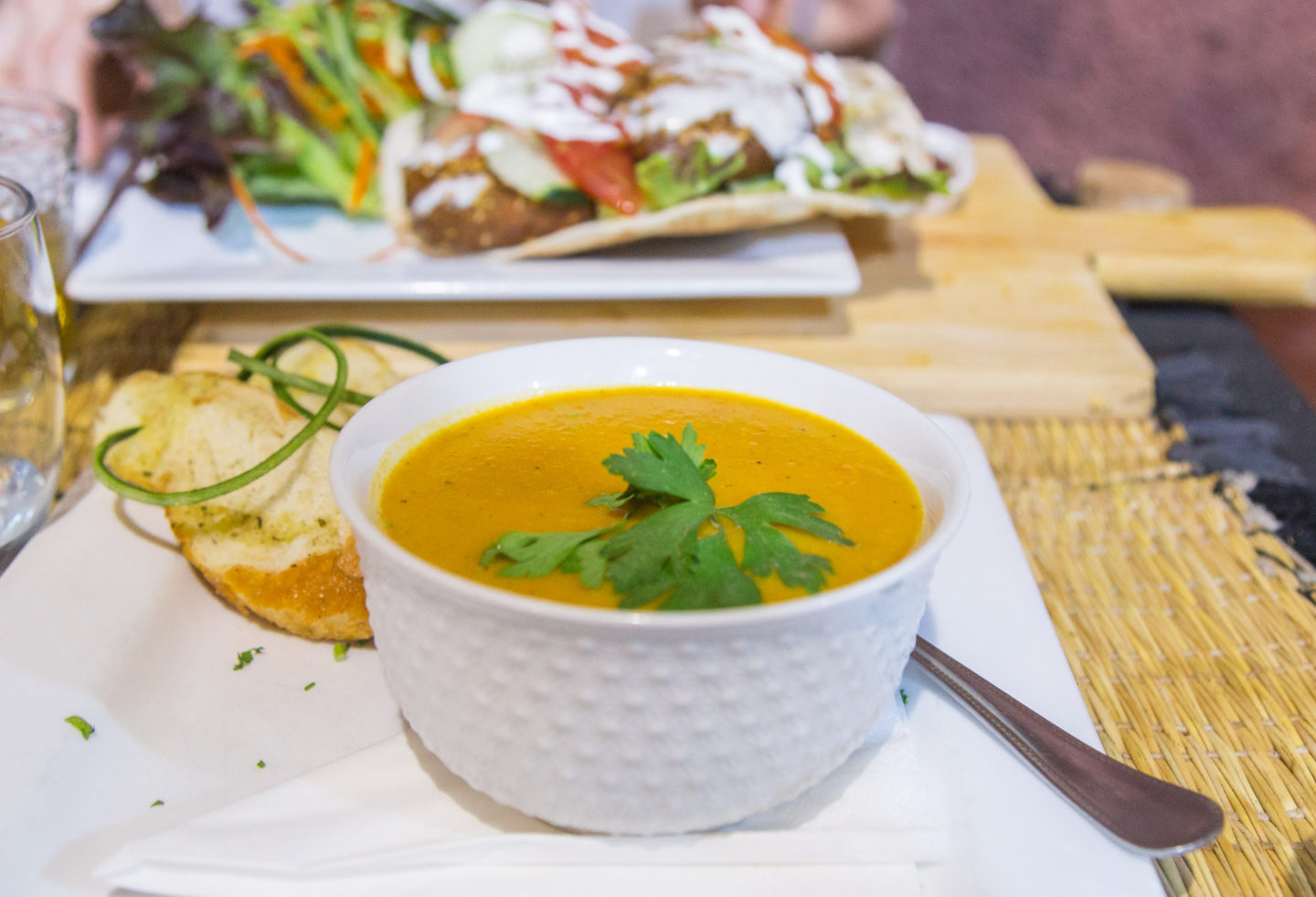 YUM! Harira is by far my favorite Moroccan dish on this whole list. It’s made with tomatoes, lentils, chickpeas, and other dishes, and it’s a classic dish for Ramadan. Kind of reminds me of how tteokguk is the soup you eat for Korean New Year.

Anyway, this soup is so good. Like kind of what you want Campbells tomato soup to taste like before it disappoints you with its blandness. If you want, you can add in some sort of meat, but I think it’s super filling and delicious on its own. Ugh, just writing about it makes me want a nice big bowl! MarocMama, who co-owns the food tour we took with her husband, has a recipe, so I’m going to have to make it! 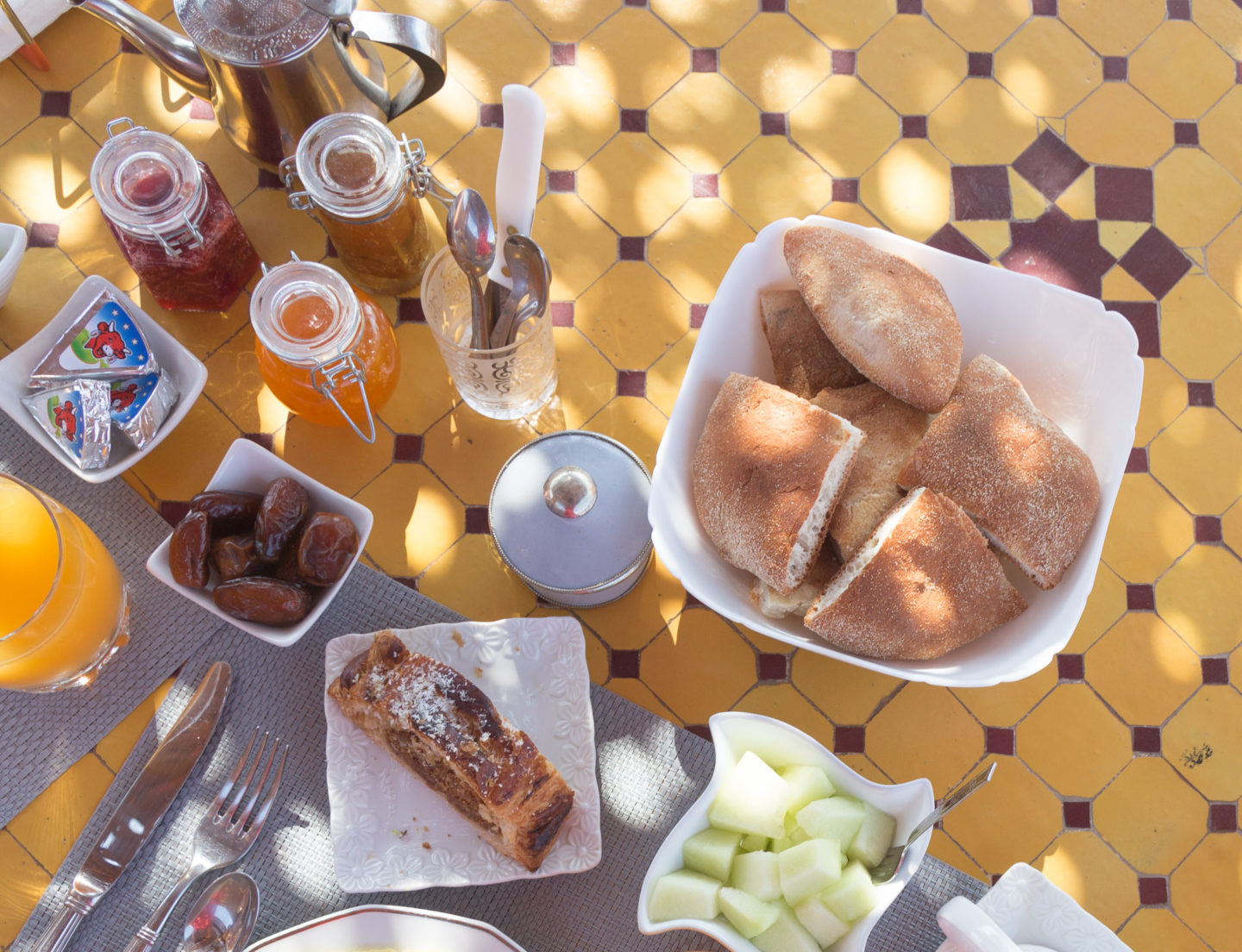 Of all the bread we had in Morocco (which was a lot), I liked Khobz the best. It’s a flatter, round bread and you’ll see it everywhere. It’ll be served at just about all the restaurants, and you’ll see regular stalls just have piles of it sitting out.

Our tour guide told us back in the day, a village would have a baker, and everyone would bring their dough to him to bake, so each family’s khobz was slightly different. Somehow the baker could keep track of whose was whose! 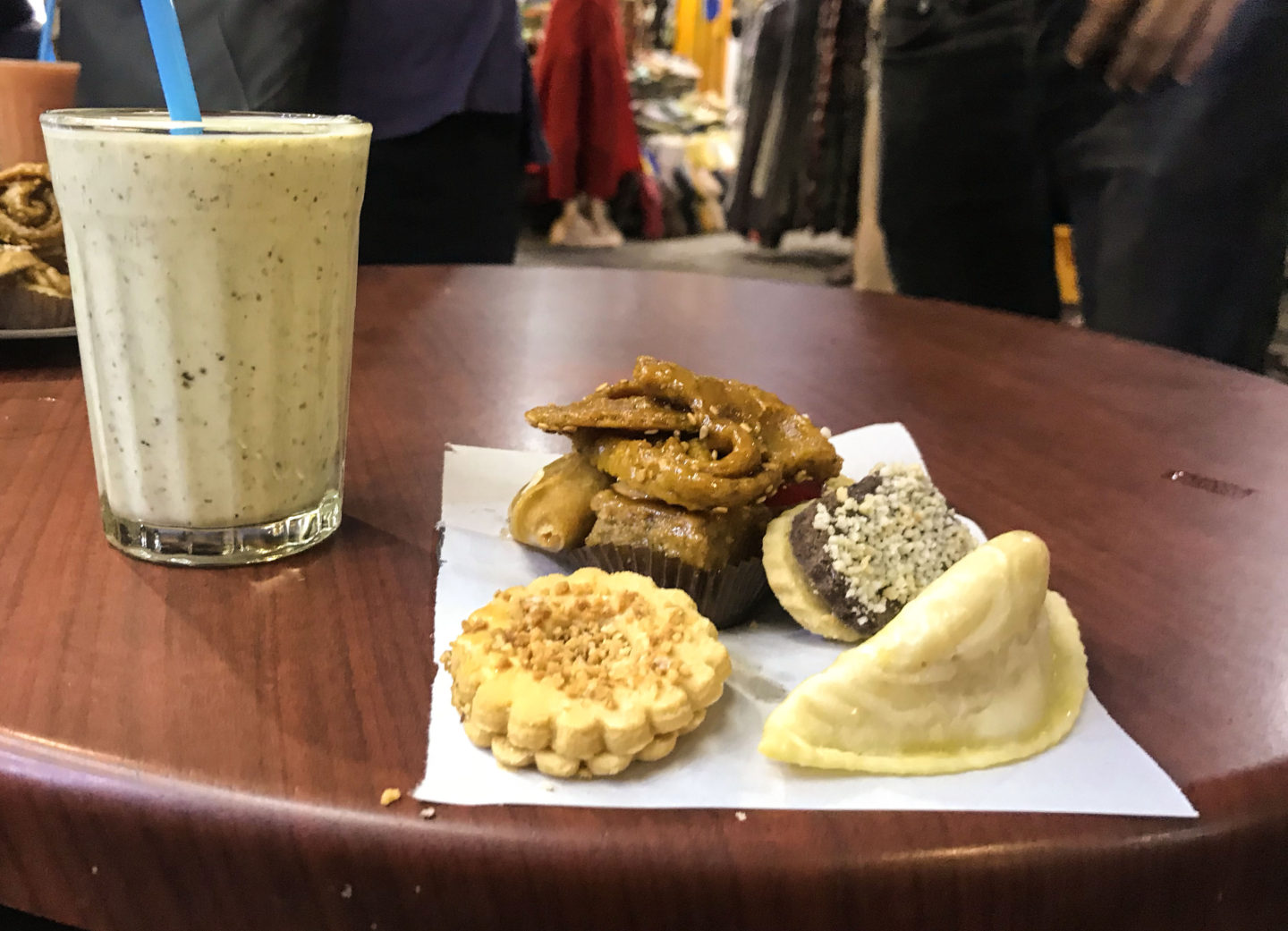 I don’t know that I could differentiate the various Moroccan pastries we tried. This post goes into the different names and types. Basically, we’d go to a bakery and pick out a few at random to try. I like them — they’re decently sweet without feeling overly sugary. 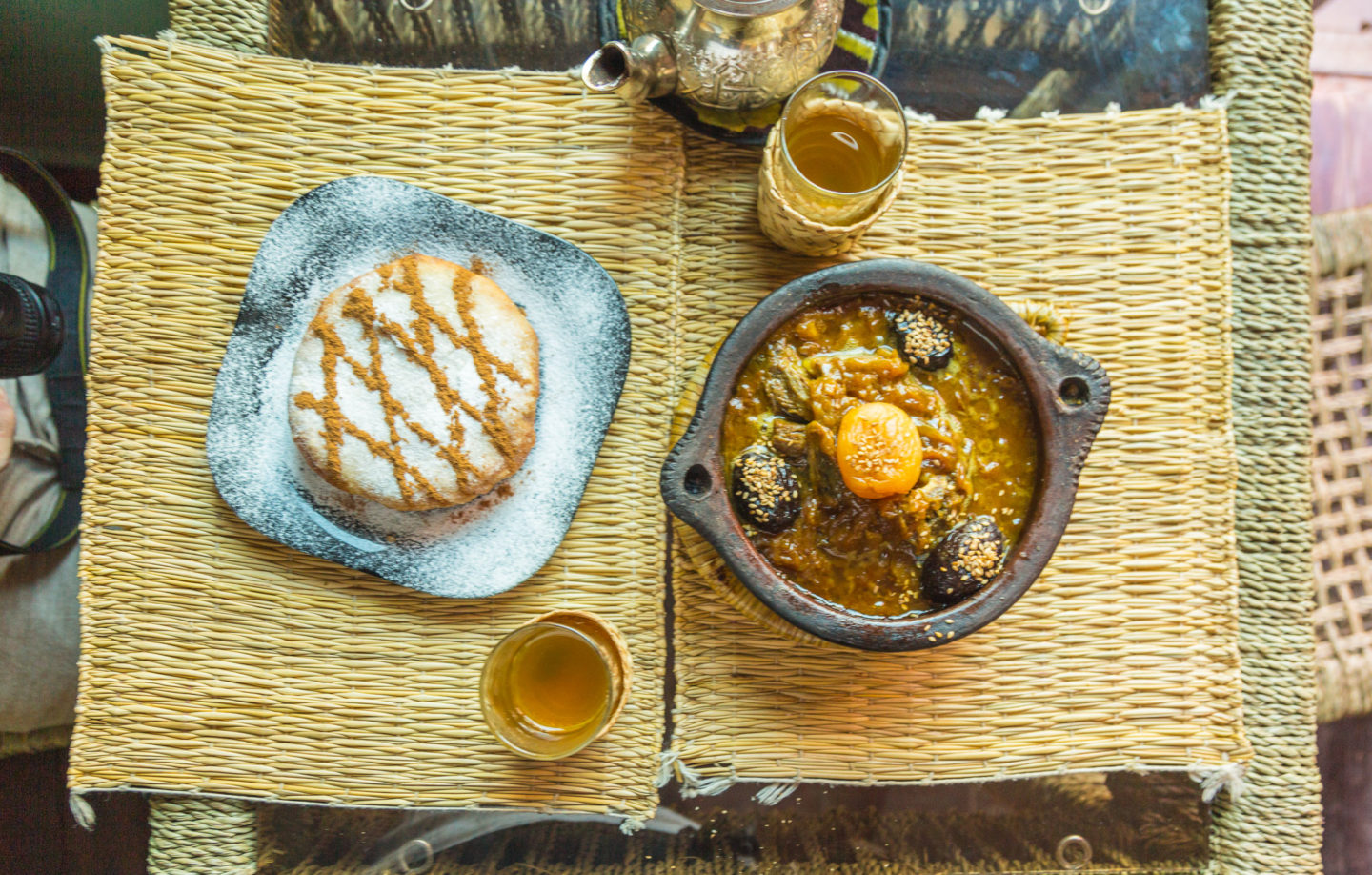 Pastilla is a big dish in Fes, so we got it there twice in our short time! It actually comes from Andalucía (hence the name). Basically it’s a thin, crepe-like outer layer of phyllo-like dough, called werqa, and then filled inside. You can get vegetarian pastilla or some sort of meat — I recommend either way! 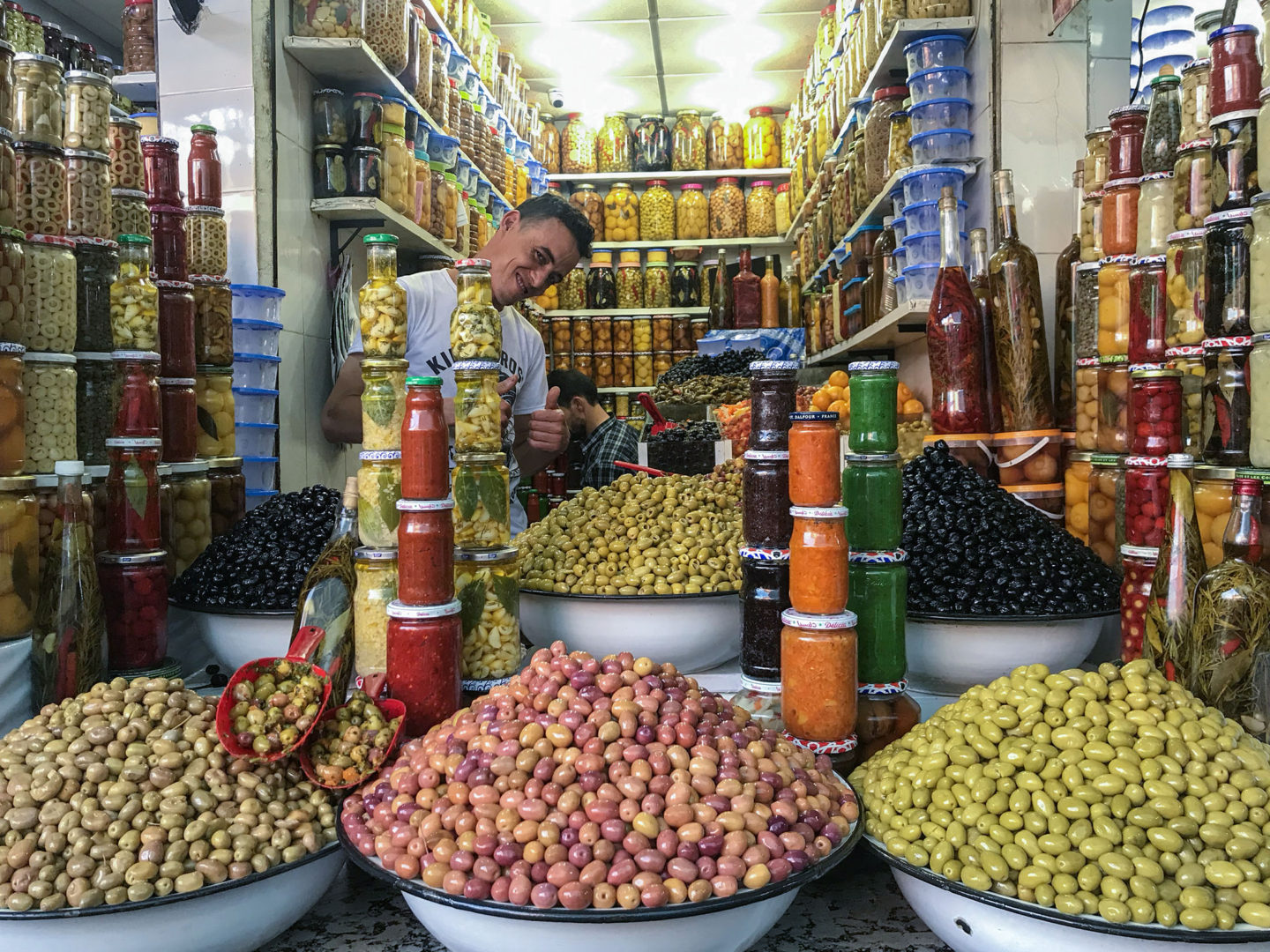 Autumn decided that olives were to Morocco what kimchi is to Korea, which actually makes sense because this country is the world’s 2nd largest producer of them! We got olives served as a side dish with just about every meal we ate in Morocco. I don’t like them, so I had one and was done, but Autumn was in heaven. There are so many varieties to try! 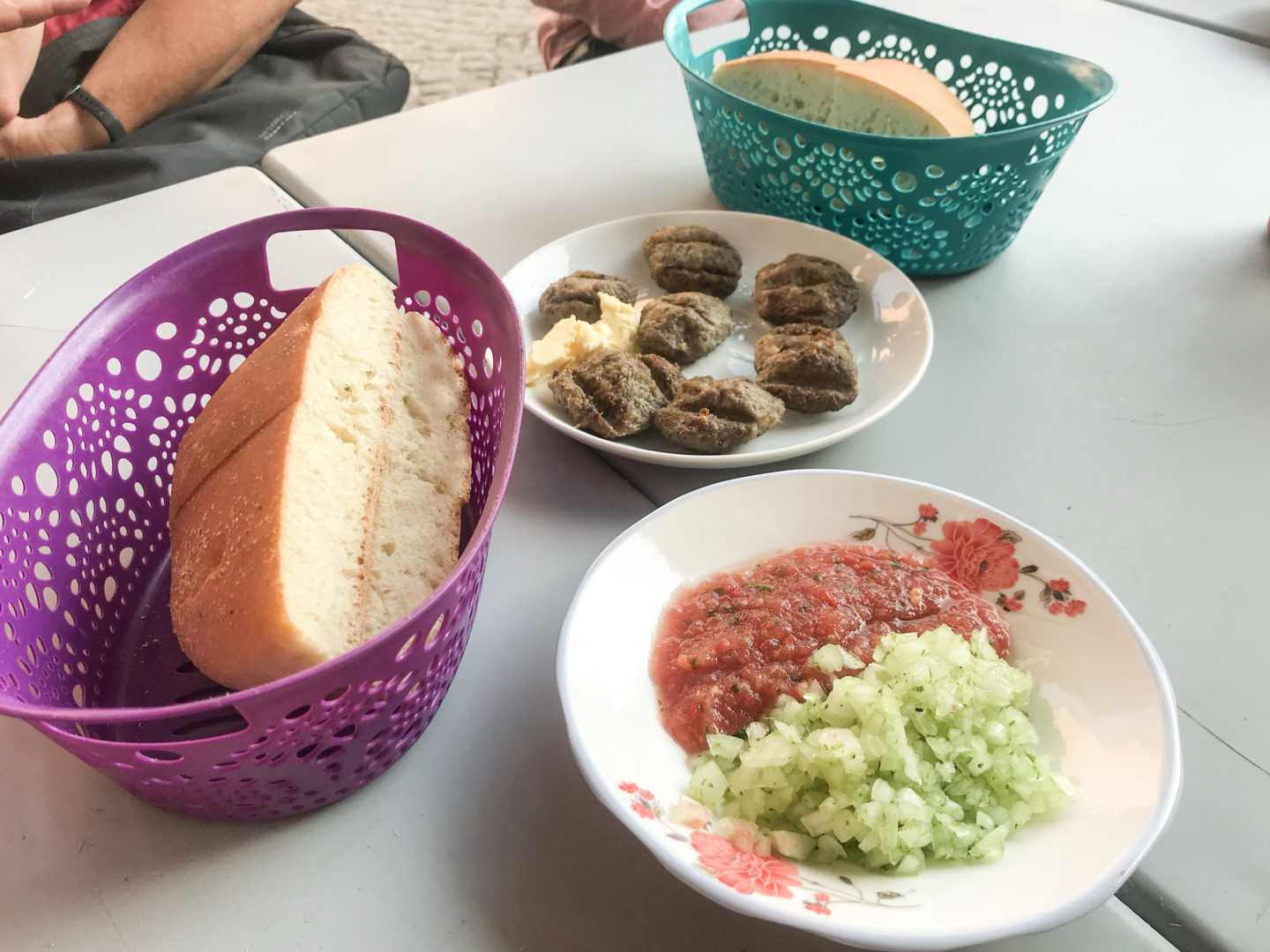 Another thing Morocco is big for — canned sardines! They’re the biggest exporter in the world! Oddly enough, we only really had them once on our food tour in the shape of little sardine burgers. 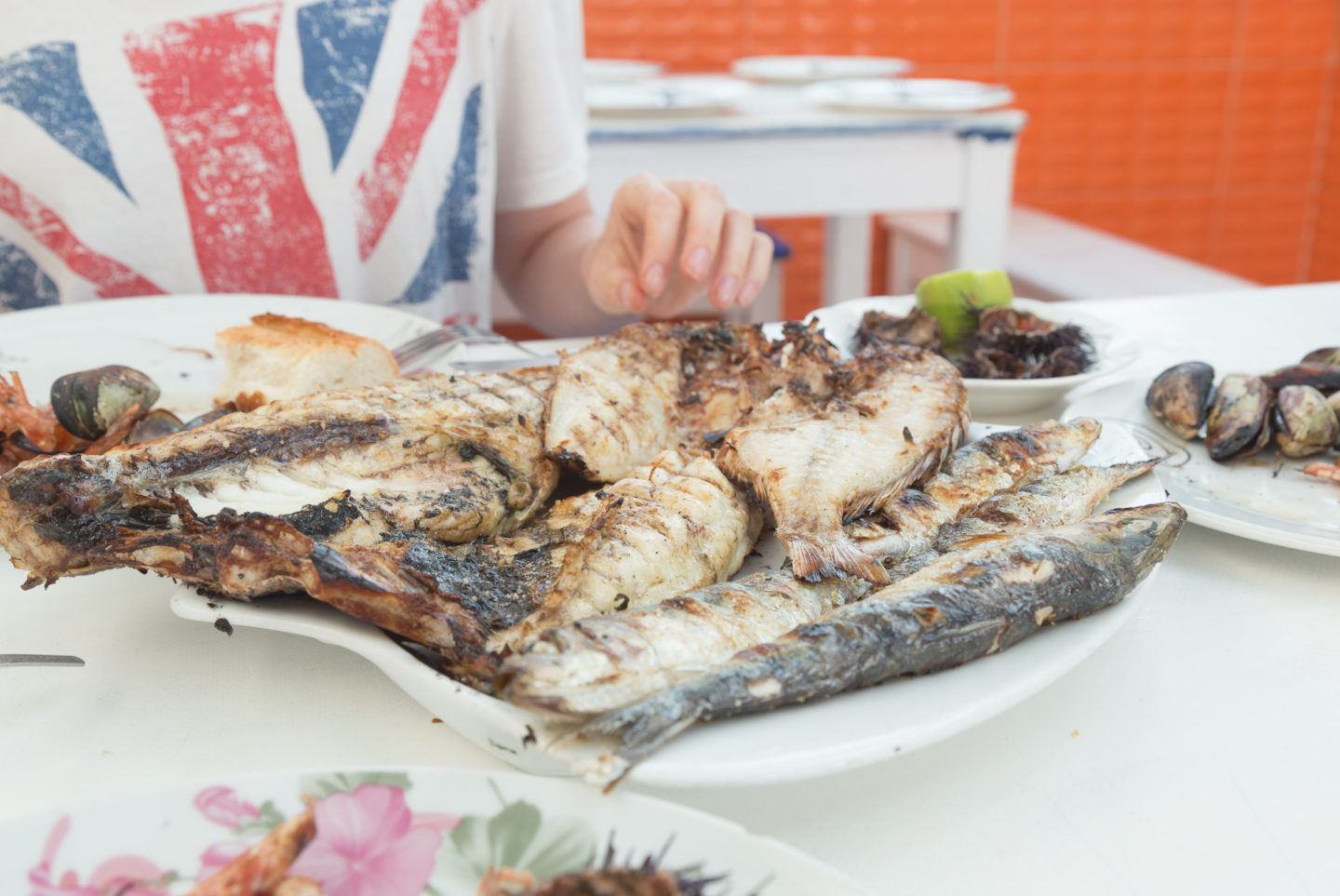 If you’re staying in a port city, you’ve got to try the seafood! It’s easily my favorite things to we did in Essaouira. There’s nothing really fancy about it. Just head to the fish market or one of the fish stalls and pick out some for them to grill. If you want to make sure they’re fresh, just smell them.

I mean, if you like doughnuts, you’re going to like these. They’re basically dough fried in oil and sometimes they come sprinkled in sugar or honey. We only had this once in memory and it was in the desert. I didn’t really like them, but I also didn’t like a lot of what we ate in Merzouga, so it was probably just the setting! 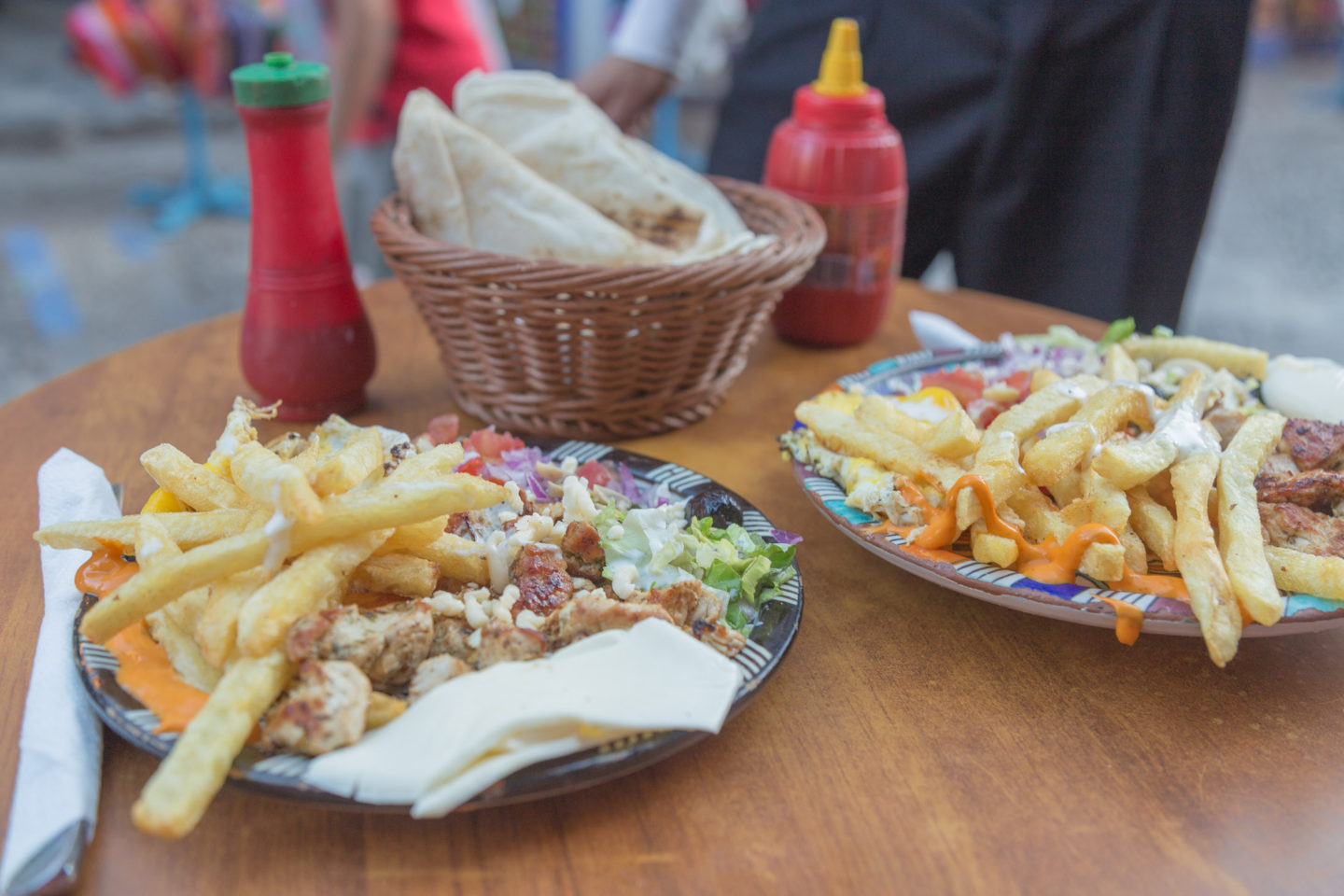 For more of a budget bite, try some shawarma! We got this the few times we just wanted something quick and small to eat in Morocco; my favorite was in Fes. The one above isn’t in the wrap form they normally come in. It’s basically slow-roasted meat cut up with different vegetables and sauce in a wrap bread. Simple, cheap, delicious! 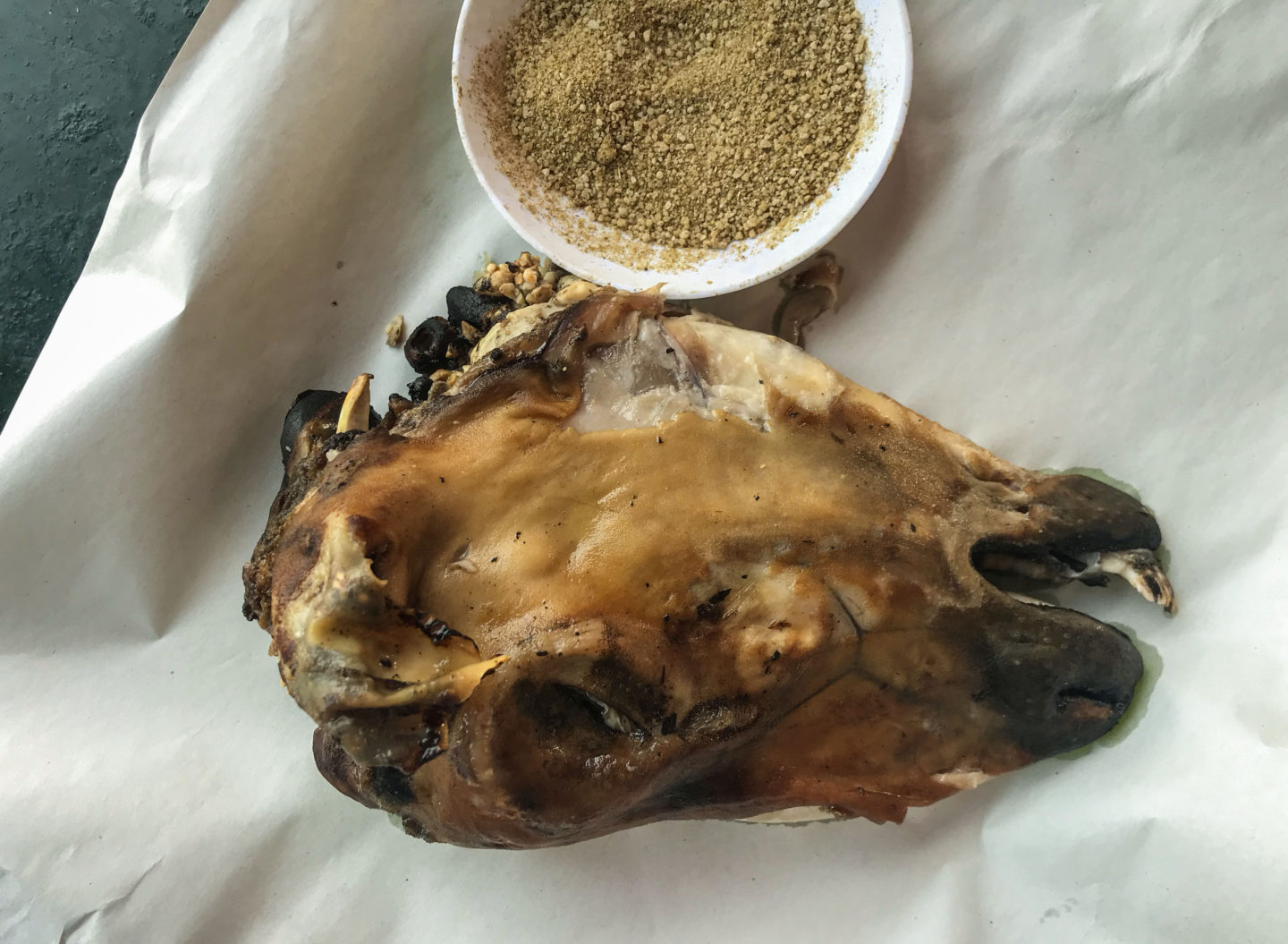 Yup! Maybe not quite for the faint of heart. This was our first dish on our food tour, and quite the way to jump into things! 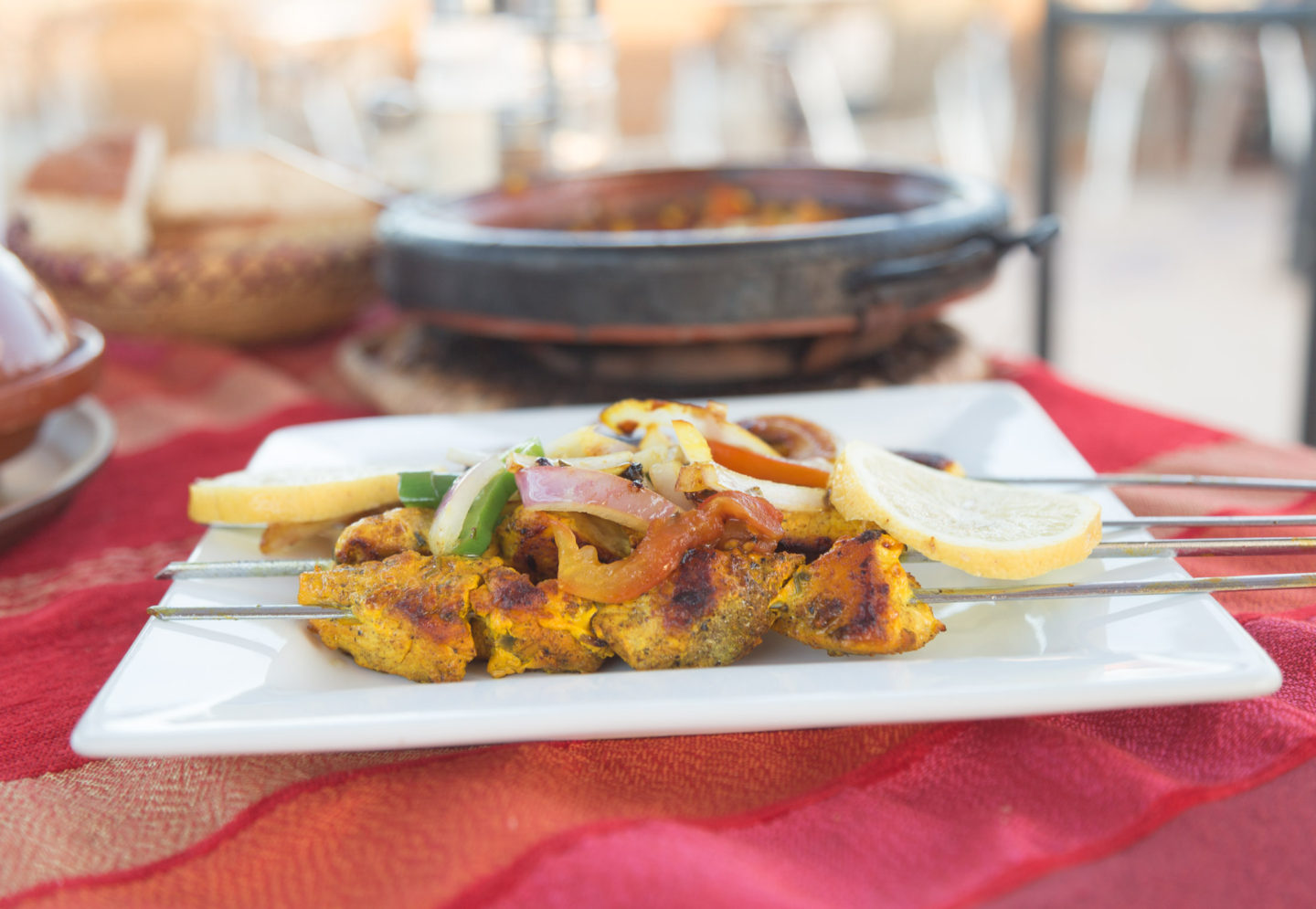 Skewers, or sometimes known as brochettes, are pretty common outside of Morocco. Meat on a stick, basically. They’re often a choice at most Moroccan restaurants and a nice thing to get with some tagine. 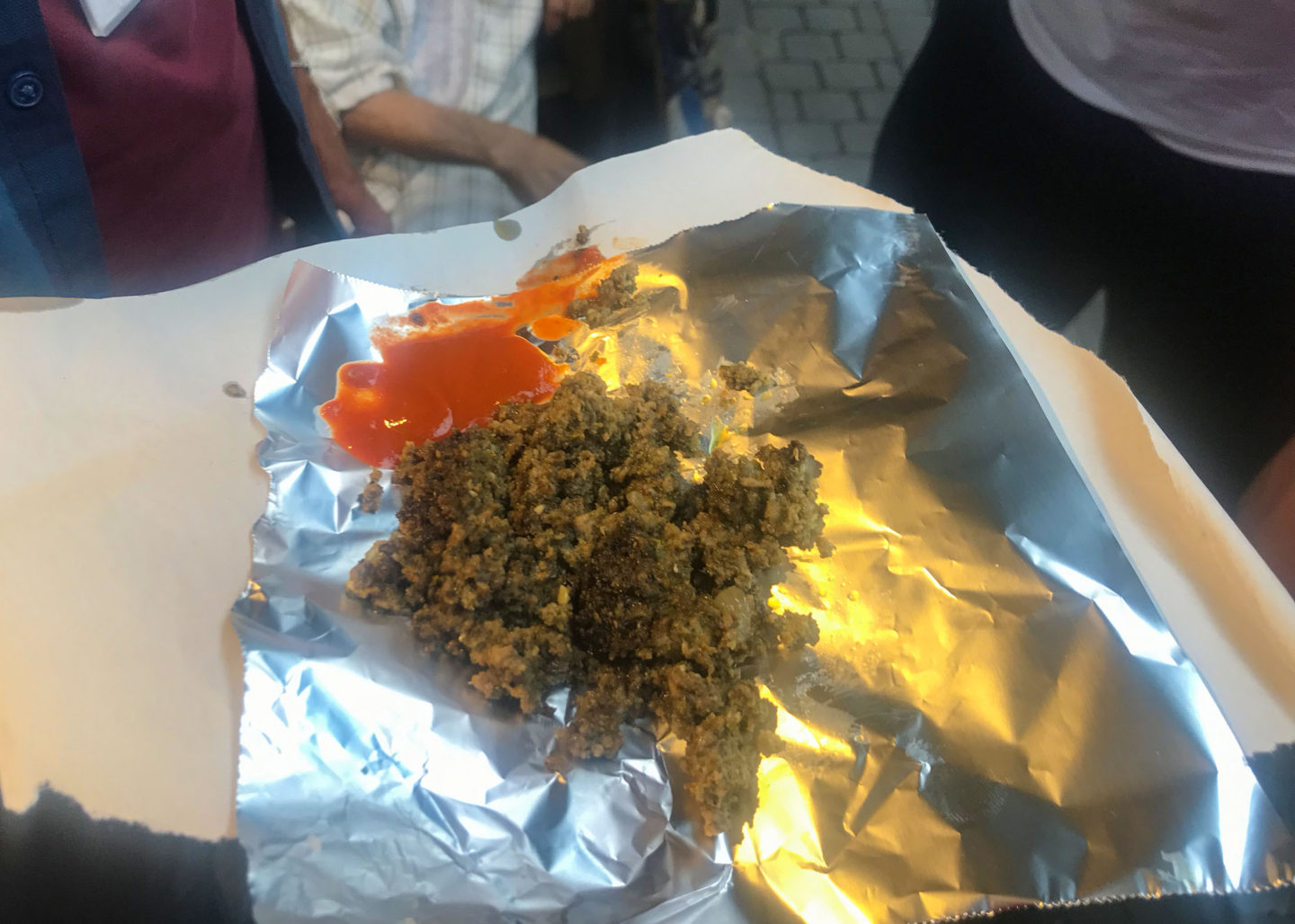 Ever tried spleen before? We only sample a bit on our food tour, but I didn’t dislike it! 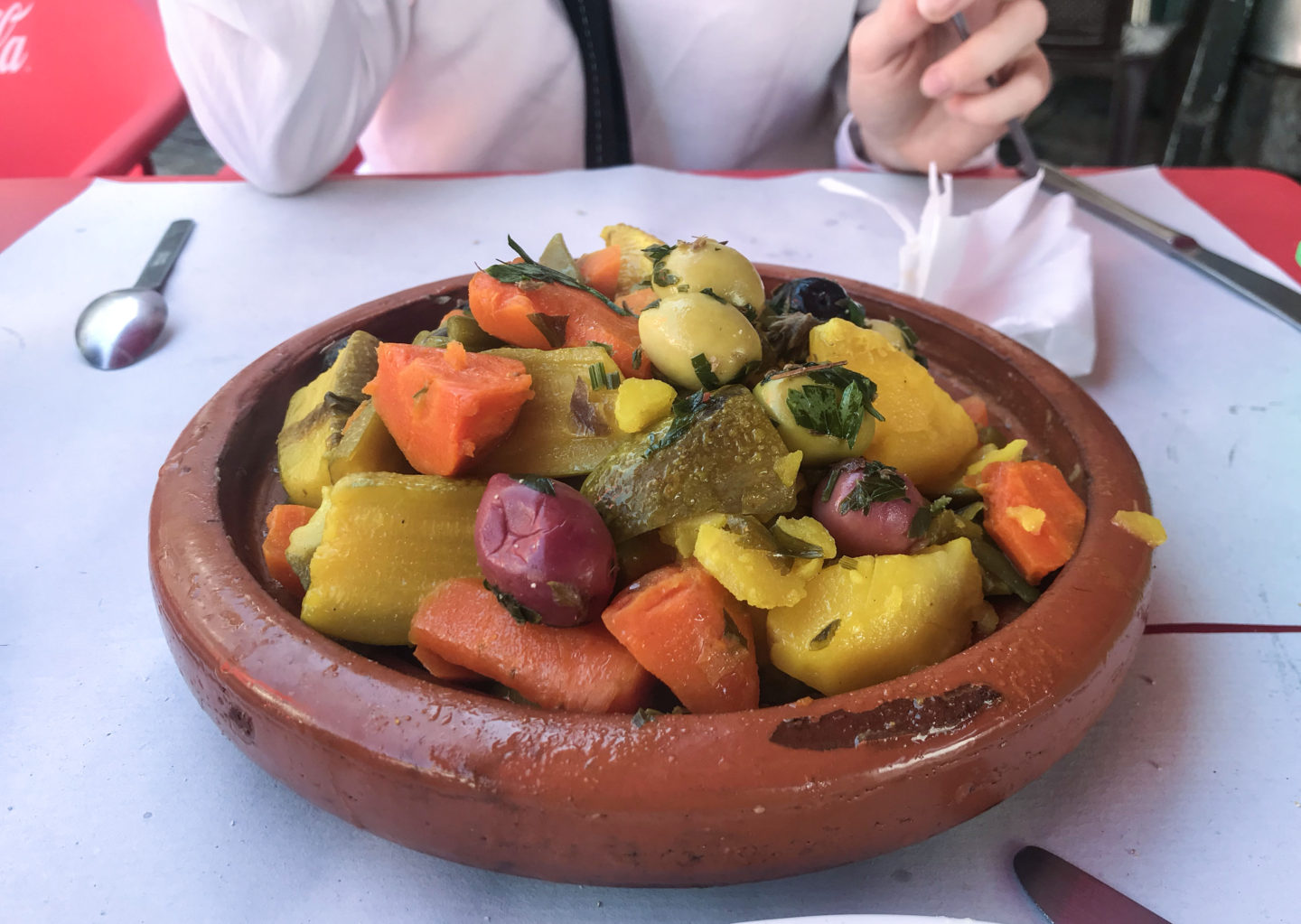 Tagine os one of the most common Moroccan dishes, and pretty much every restaurant we visited had some variation on it. The name comes from the dish it’s cooked in. It’s basically either meat or fish cooked with vegetables and spices. I feel like most dishes have at least turmeric in them since ours were yellow-ish. Also, of course, you can skip the meat and fish and just get vegetable tagine! 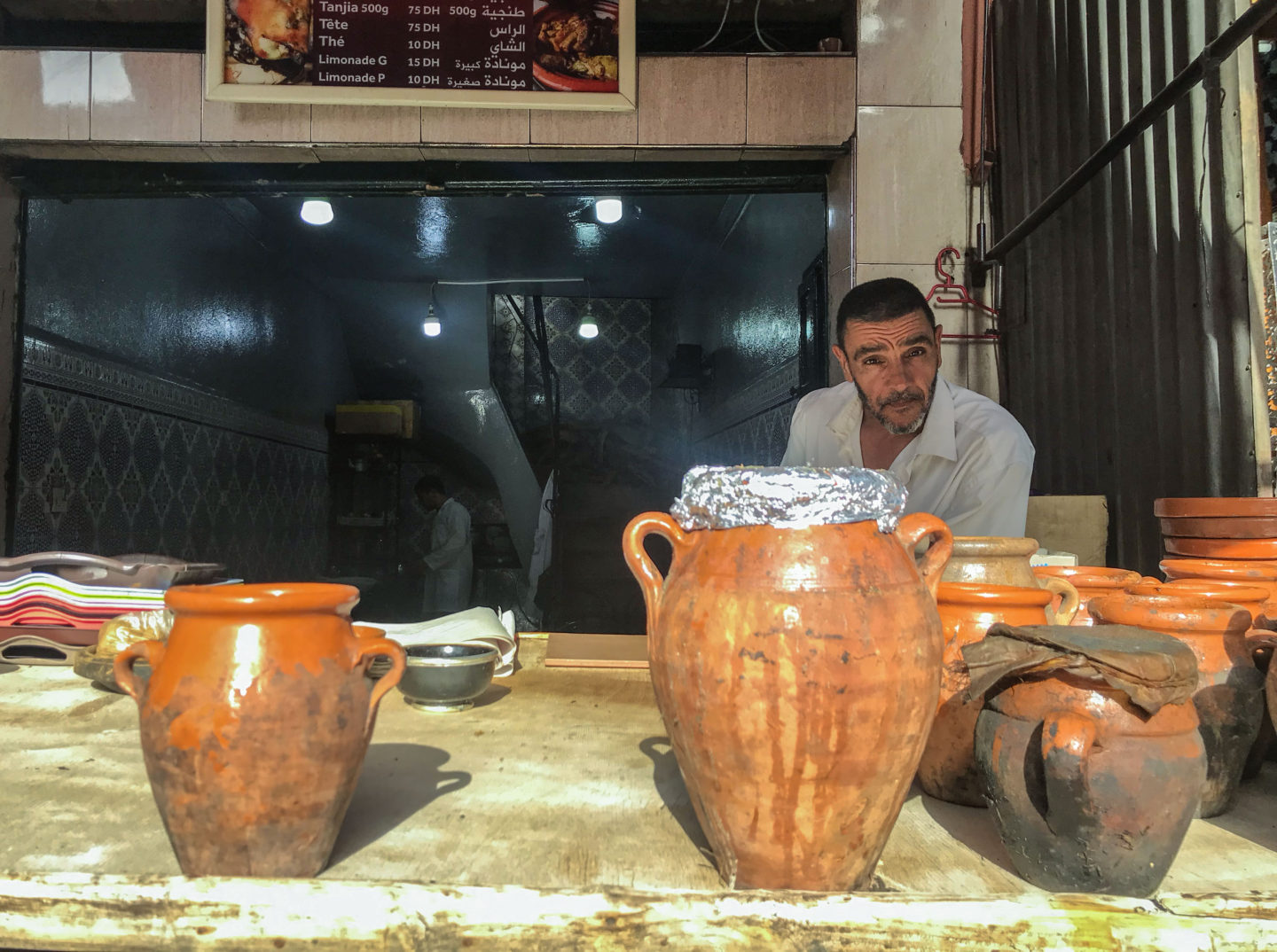 Similar to tagine, this dish is made in tangia instead. Instead of the flat dish tagine is made in, tangia is made in a sort of urn-shaped pot that’s lifted down into an underground oven and slow cooked. It’s really only found in Marrakech.

What to Drink in Morocco 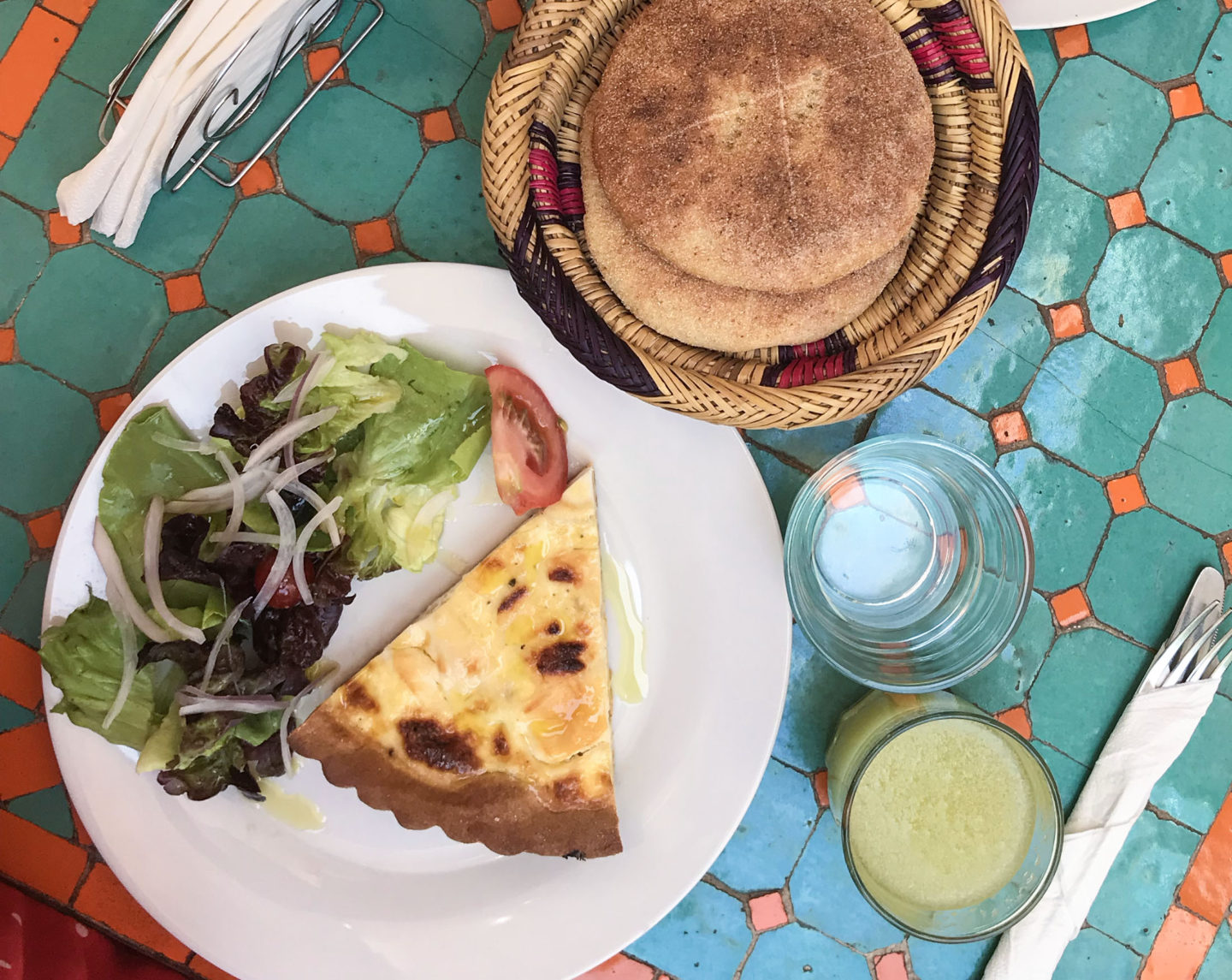 Random, but if you do go to the Amal Centre in Marrakech, get the lemonade! 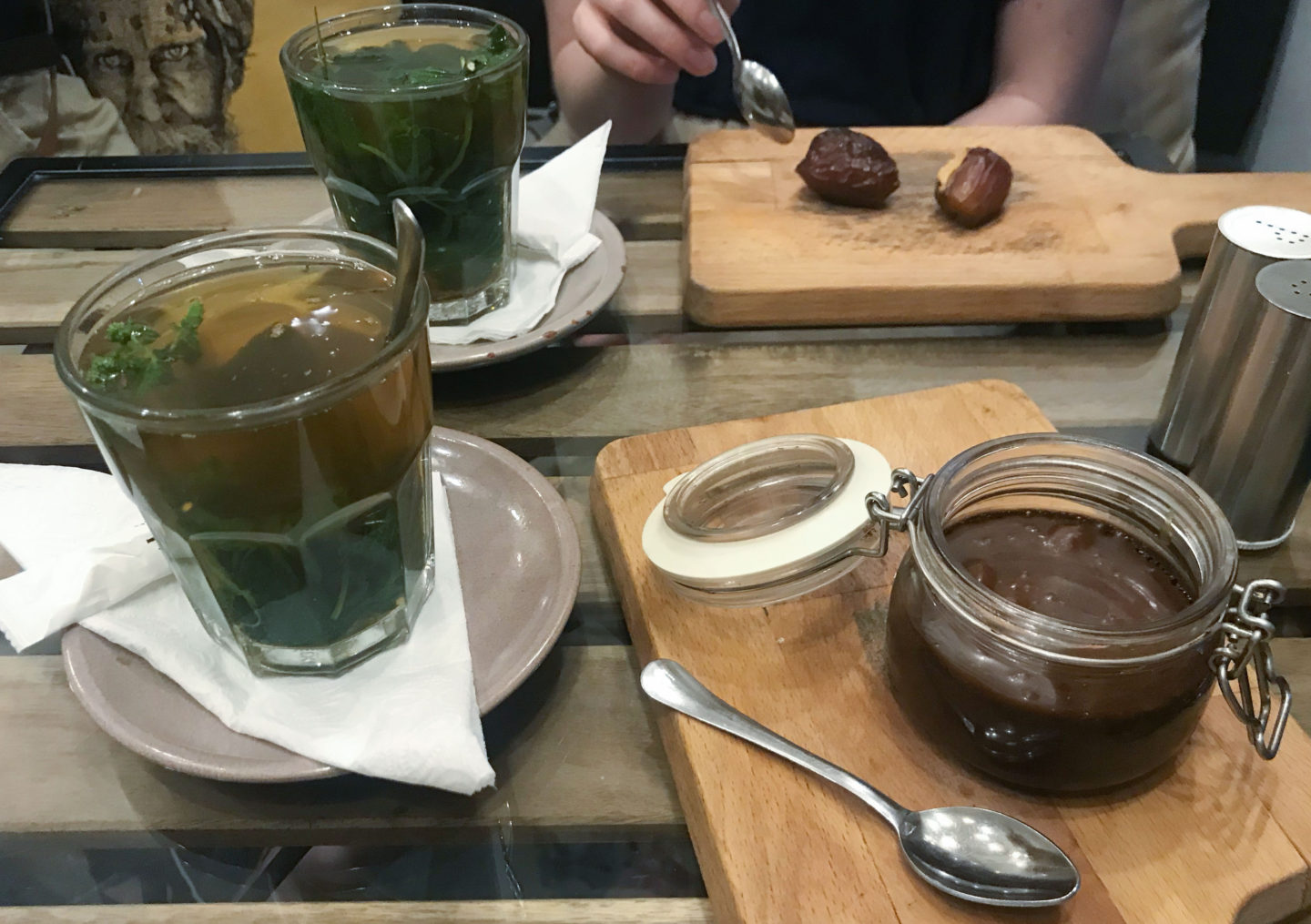 You’ve got to go out of your way not to drink mint tea in Morocco! Pouring a glass when you arrive is considered hospitable, so most of our accommodations had a set waiting for us when we arrived. Fun fact — they pour the tea the way they do to help it cool a little before you drink, though some will say it’s so you can see how how much the tea bubbles. The more bubbles, the better the tea apparently. 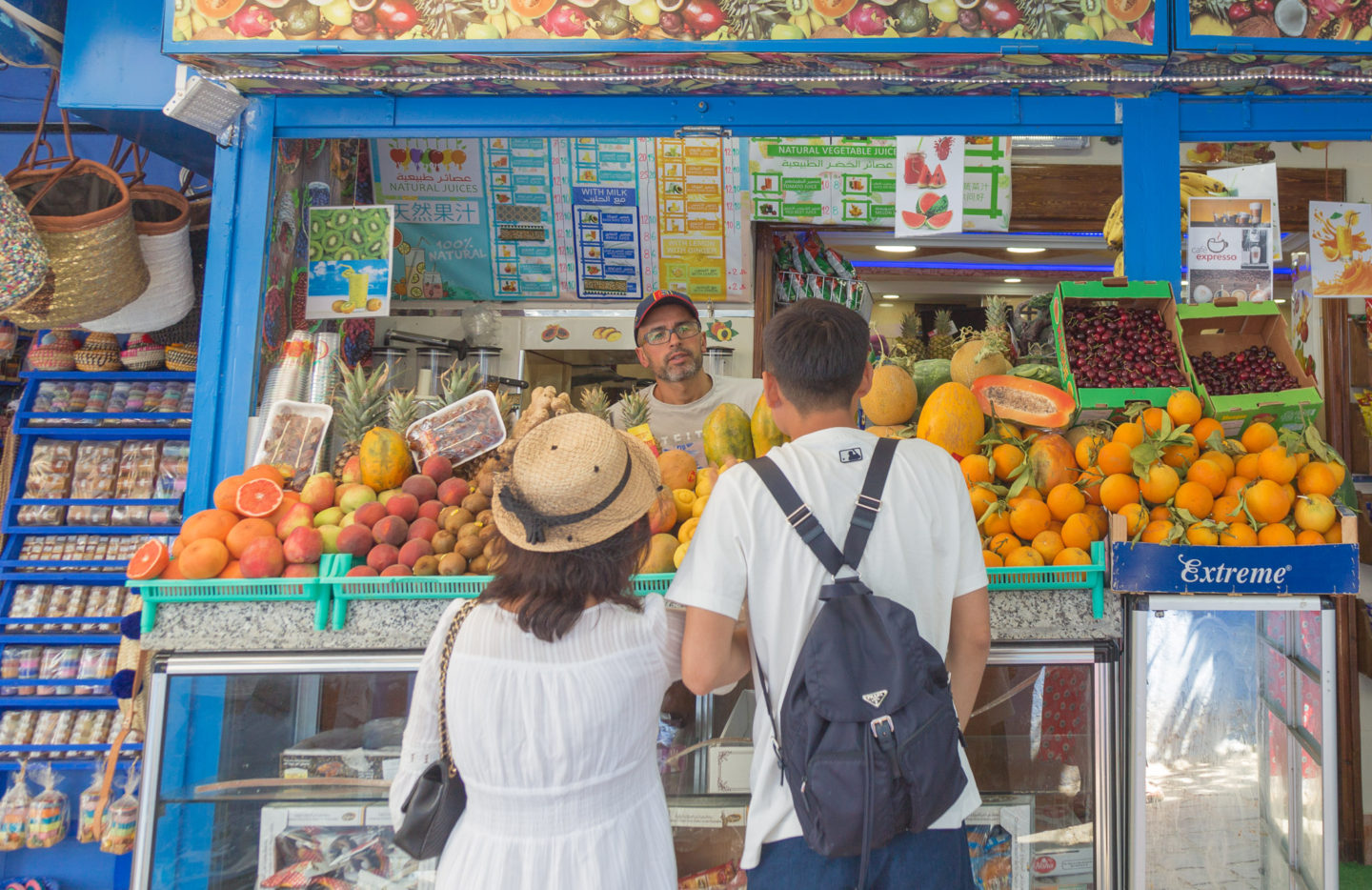 Oranges are pretty abundant in Morocco, so at the very least get yourself some fresh-pressed orange juice while you’re out! And I mean fresh-pressed. When we got ours, we quite literally watched them hand press our juice right in front of us!

Tips for Planning Your Morocco Trip

For more help planning your trip, check out this post on the best cities to visit in Morocco and this post on how to get around! Plus don’t miss my tips on what to wear in Morocco.

And there you have it — all of the Moroccan food you’ve got to try while you’re here! Let me know if I’m missing any below! 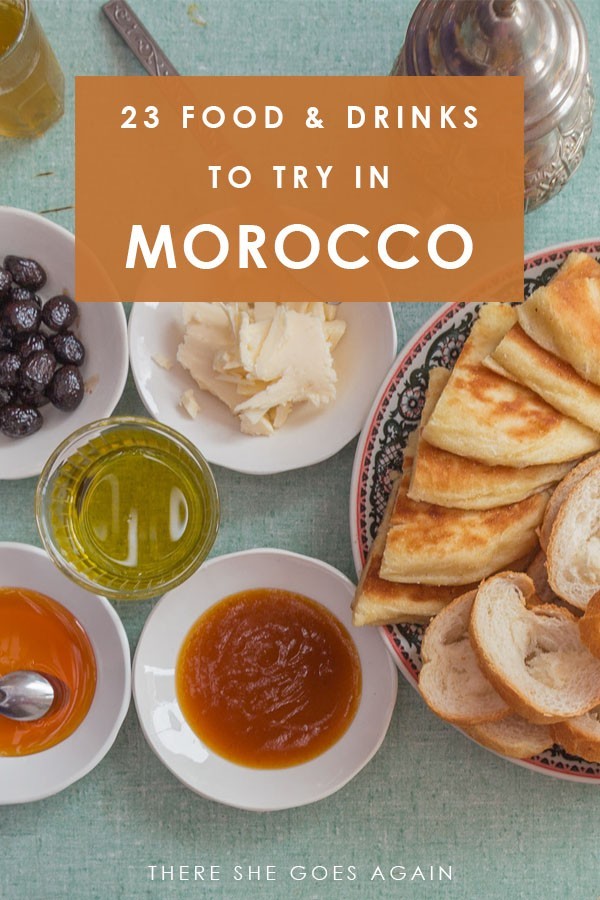