Ahhh transportation! One of the main things I’m always worried about when planning a trip to a brand new country. Luckily, it really wasn’t that difficult figuring out how to get around Morocco!

For as “foreign” as this country seems to Americans, it’s really quite accustomed to tourists and outside visitors. This means its transportation is pretty up to date and, in many cases much nicer than US standards. Autumn and I spent 3 weeks moving through different cities in Morocco, and we took everything from a camel to a bus! I like to think we saw quite the variety of transportation Morocco offers.

How to Get Around Morocco: A Breakdown of the Different Modes of Transportation 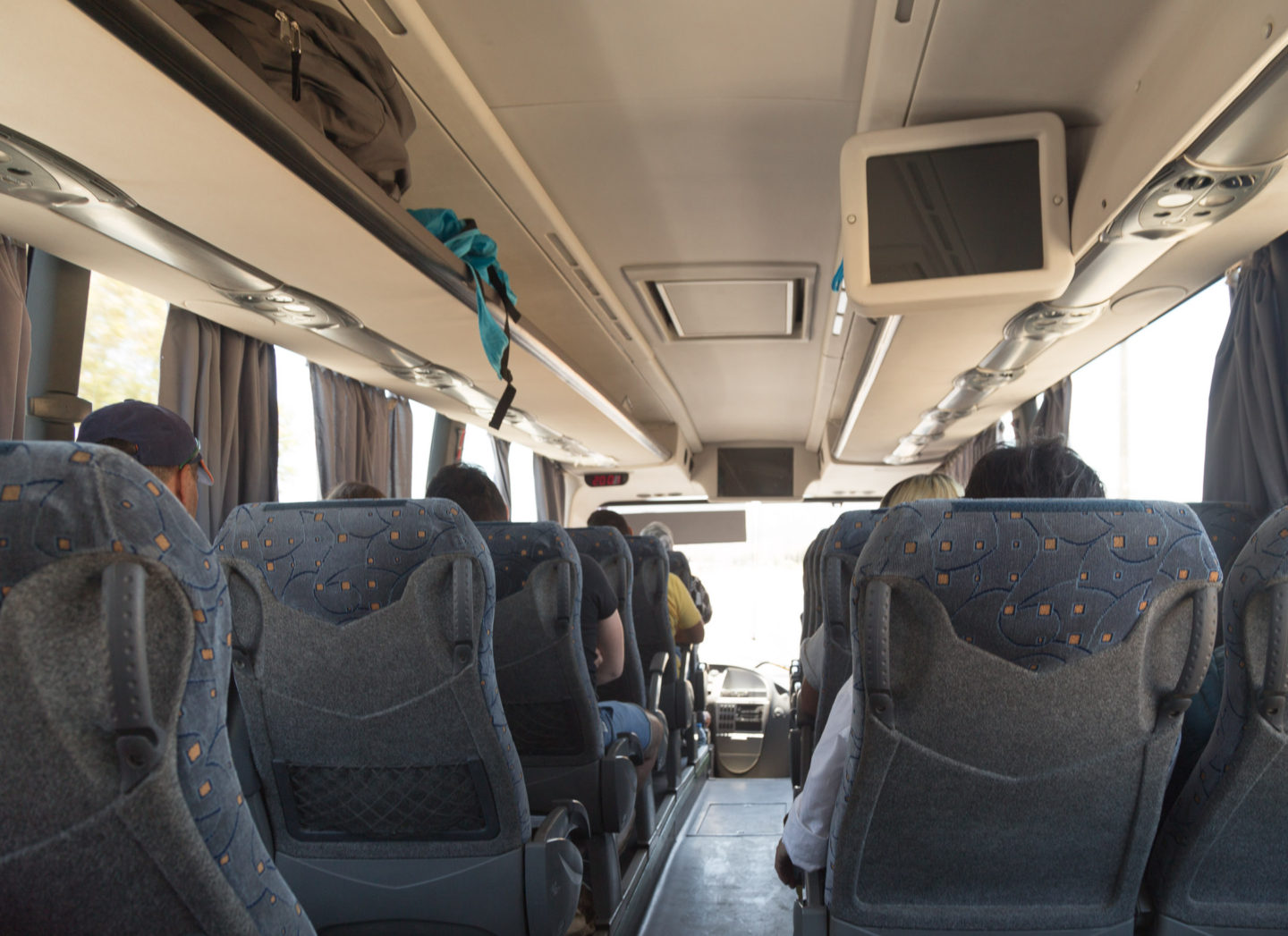 We most frequently used Morocco’s bus system, especially to get from city to city. I do think there are local intercity buses, but I really only saw them in Ouarzazate. Everywhere else we simply took a taxi or walked.

As for intracity buses, the two main companies are Supratours and CTM. We took Supratours from Fes to Merzouga overnight and from Marrakech to Essaouira. Then we took CTM for everything else besides Merzouga to Ouarzazate.

Usually one or the other has a route to where you want to go, but once in awhile they overlap. Both the buses are nice and air conditioned.

Do note if you have a suitcase, they both charge 5 MAD extra per bag. You can find their prices and times on their websites, which is nice for planning. I also wouldn’t worry about trying to book ahead because we never had an issue getting our tickets at the stations.

So there are usually anywhere from 1-3 stations depending on how big the city is. Supratours and CTM have their own stations, and then there’s a Gare that has a lot of other local bus companies. In the smaller towns, like Chefchaouen, there’s only a Gare that will receive CTM as well as other companies.

If you’re really pinching pennies, you can go to the Gare and get a local bus for a bit cheaper than Supratours or CTM. Just know they might not be air-conditioned or as nice!

One of the more infuriating things about riding a bus in Morocco is that it’s typically much slower than the timetables tell you, so don’t book anything too close to your arrival time. If a bus ride was only supposed to be 3 hours, it was more likely to be 4+ between the roads and long breaks.

Why anyone needs a 30-minute break on what’s supposed to be a 3 hour ride is beyond me, but that’ll happen. Sometimes it feels longer. They usually stop as some little cafe-restaurant thing. It’s worth getting off the bus to stretch your legs because they turn off the A/C  and lock the bus.

So I don’t know how often this happens, but it’s something your hotel can help you figure out if you want to try it. Our hostel in Merzouga set us up with a shuttle bus for Merzouga to Ouarzazate, and it cost the same as if we had taken another bus (about 150 MAD).

The shuttle bus is pretty nice and, of course, air conditioned. We were with some other people who got dropped off at different points. The nice thing was that it picked us up at our hostel and dropped us off in front of our hotel in Ouarzazate instead of us needing to take a taxi in between.

I also took shuttle buses to and from the airport in Tangier and Casablanca. The one from the airport to my hostel in Tangier, but they totally overcharged me as it was 250 MAD, and I read you could get a taxi for 100-150 MAD. But, whatever, it was my first time in Morocco and I got in past midnight — I didn’t want to deal with haggling so soon.

Turns out the Casablanca airport is quite far from the city of Casablanca, like 40-50 minutes from where we stayed! I did not relish the idea of trying to negotiate with another taxi, so I asked my hotel how much it would cost (400 MAD) and just ordered this exact shuttle from Get Your Guide. It’ll tell you to meet at Casavoyegeurs Station, but just email the company when you’ve ordered, and they’ll send the shuttle directly to where you’re staying.

Here are some other airport transfers you can compare for prices vs. what your hotel offers: 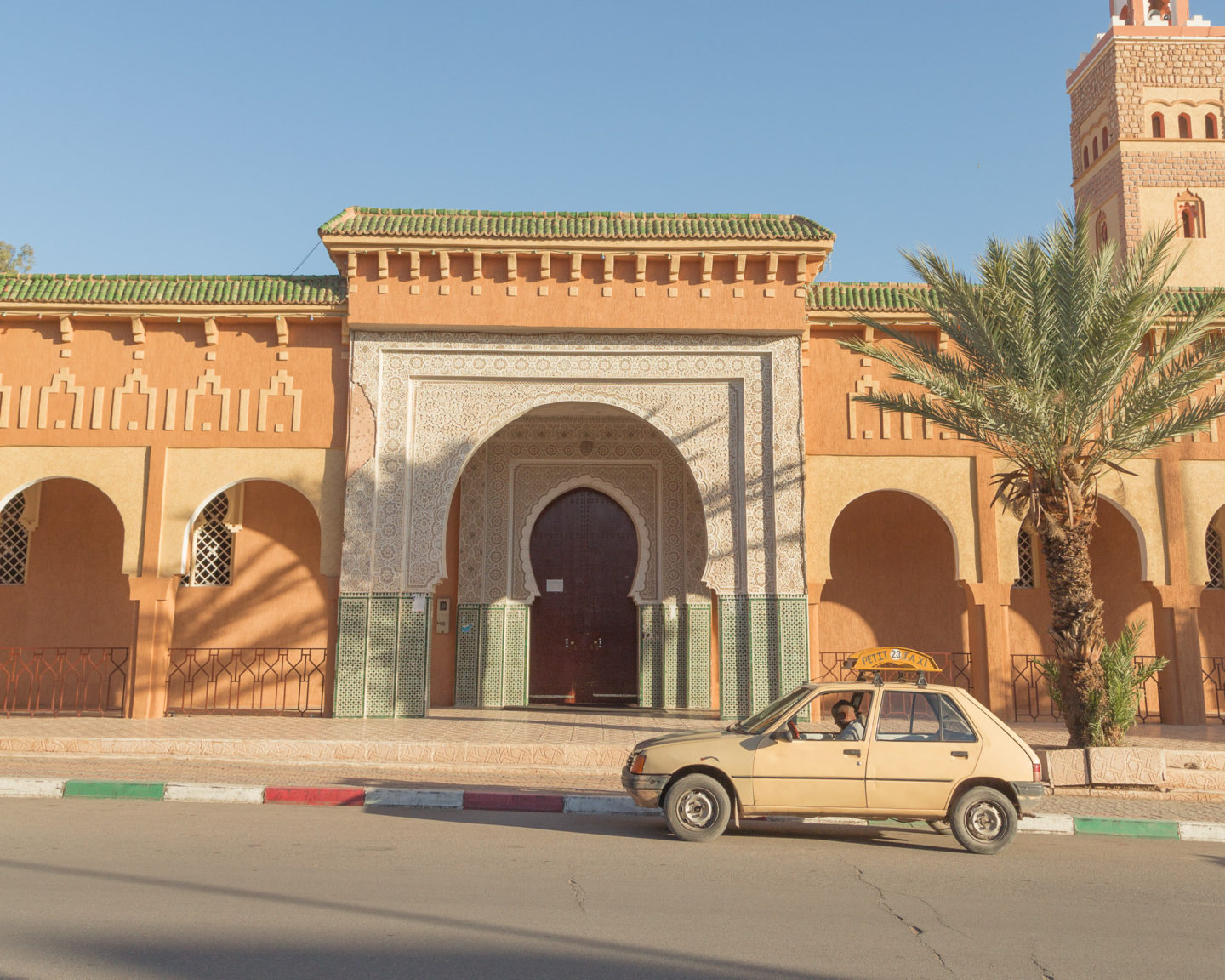 Ahhh taxis. We generally tried to avoid taking taxis too often because the idea of constantly haggling was a pain in the ass. There are two types of taxis — a petit taxi and a grand taxi. The grand ones are more like minivans and will go from city to city. If you’re in a group, it might be worth splitting a grand taxi, but it wasn’t worth it for us.

Anyway, the petit taxis are for their specific cities, and they look like the normal taxi cabs you’re used to. They never want to use the meter because they know it’d be cheaper than bargaining. Still, it’s worth asking just in case they say yes.

I recommend asking your hotel how much it costs to get from the bus station – hotel so you have a better estimate to bargain with. Then when you get off the bus, show the taxi driver your address and ask him how much. They usually say something exorbitant — don’t feel bad negotiating them down and walking away. Don’t believe them if they say that’s the standard price, that’s bullshit.

In Marrakech, the guy tried charging us 100 MAD from our hotel – the Supratours station and then told us it was a normal, set price. He also told us the meter was broken *eye roll*.  We told him we only paid 60 MAD from CTM (similar location) before and as we were about to walk away, he backtracked real fast. He then tried to tell us it was 10 MAD more when he dropped us off. Autumn, in a very pissed off tone, said, “Laissez” and reminded him it was only 60. This caused him to stalk away moodily but he let it go.

Our Casablanca guy did the same thing from the bus station to our accommodation. First of all, he didn’t effing listen or pay attention when we showed him the map of where we were going after we negotiated 50 MAD (even though our accommodation said 20). He went in the WRONG direction forever, and then he finally listened to Autumn navigating (even arguing with her the whole time about turning), he tried to charge us 10 MAD more, and Autumn told him off again. Don’t be afraid to tell them off, especially if you know French or Arabic! They back down real fast.

Have exact change for the taxis! If you give them a chance to give you change back, they’ll take an extra 10 MAD and tell you it’s for your luggage. There’s not much you can do then since you’d have to get them to give you that extra 10 (not worth the hassle).

We have 0 experience with the trains as we never once used them on our route. I think they may be more common if you’re going between major cities like Marrakech – Fes and vice versa. From what I’ve heard they’re pretty nice, but something tells me there’s none of the high speed fanciness of a Korean KTX.

You can check here for the train routes and timetables to see if it matches with your trip. 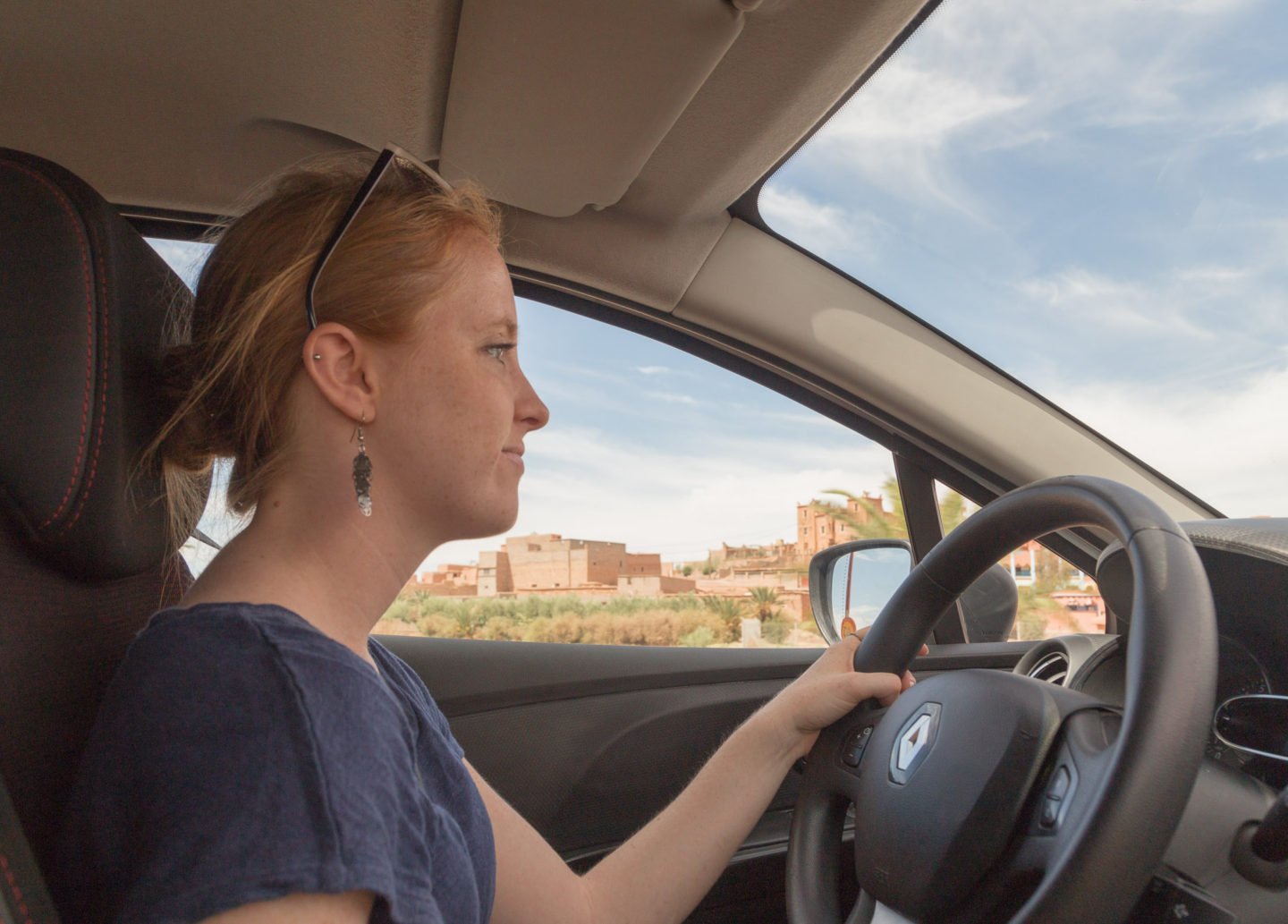 Wayyyy back when we started planning, Autumn wanted to rent a car for the whole trip. After reading this article and asking some friends about their trips, I wasn’t into renting at all. Looking back, though, I don’t think it would’ve been that bad outside of the main cities. We wound up renting  car in Ouarzazate to see Aït Benhaddou and Telouet Kasbah, and it was super convenient.

If you rent a car, don’t go to the main brands like Hertz or Avis, but go to the almost dodgy looking rental car offices. The prices are much cheaper, and the cars/service just as nice. In Ouarzazate, we originally went to Europcar, waited in an office without A/C, and were told 1600 MAD for the day. LOL. We then went into a random office downtown as we were looking for a grand taxi, and it was only 528 MAD or 40 euros. Here’s the location the office we went to.

The roads are, of course, not the most updated or fanciest, but Autumn said she’d driven worse in the Tennessee woods, so I left it up to her, especially since it’s also only manual driving here. 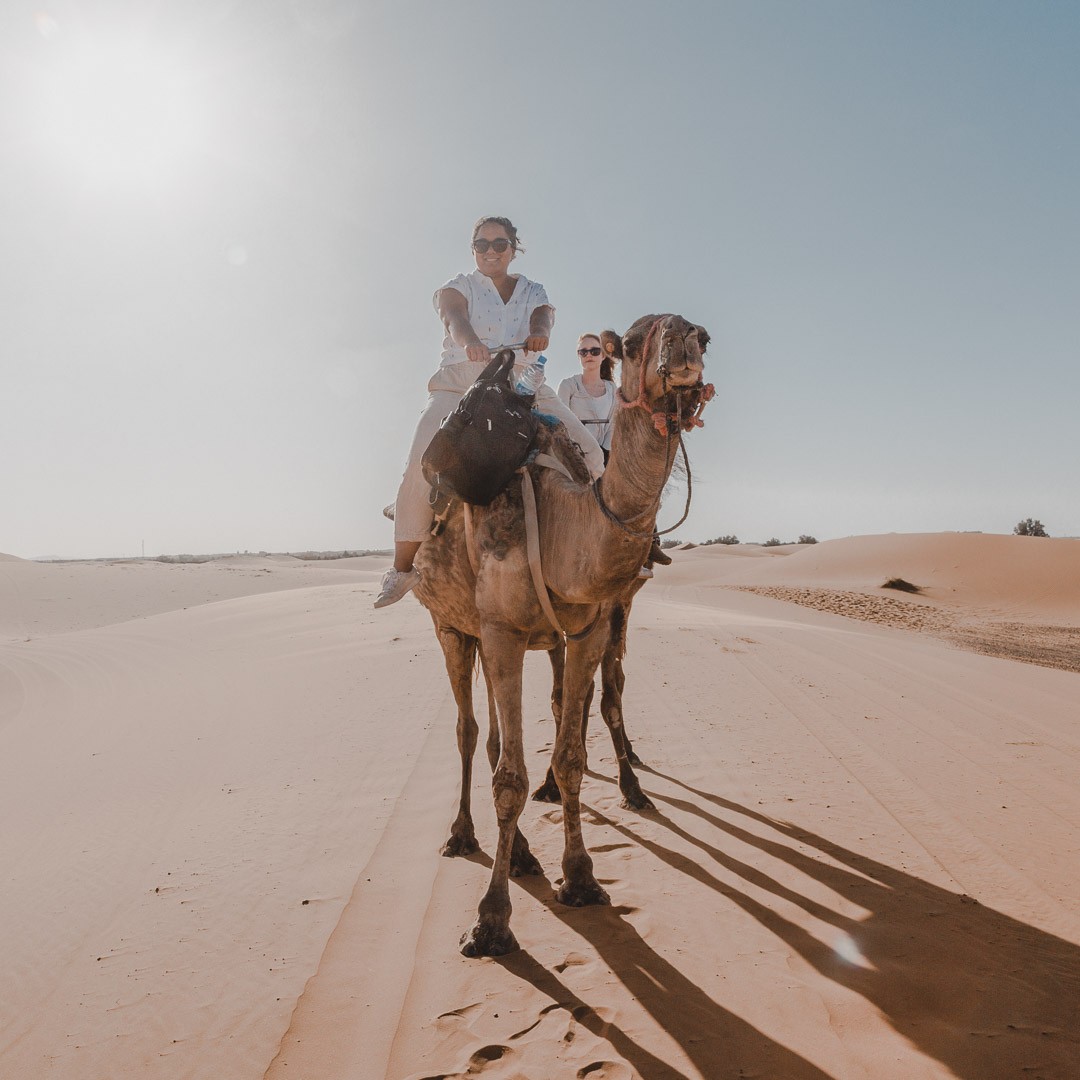 Haha, not really, but I guess technically we did ride our camels to our camp in the Sahara. We took a car back though because an hour+ on a camel is not as fun as it sounds. My thighs were sore. I will say for all the issues I had with our Merzouga hostel, they did have their own camels that seemed quite taken care of. I overheard some people who did the Sahara Desert from Marrakech who had issues with their trek’s treatment of their camels, so, as always, be careful of who you tour with!

And there you have it, all the tips I can think of on how to get around Morocco! Let me know if you know of other ways! 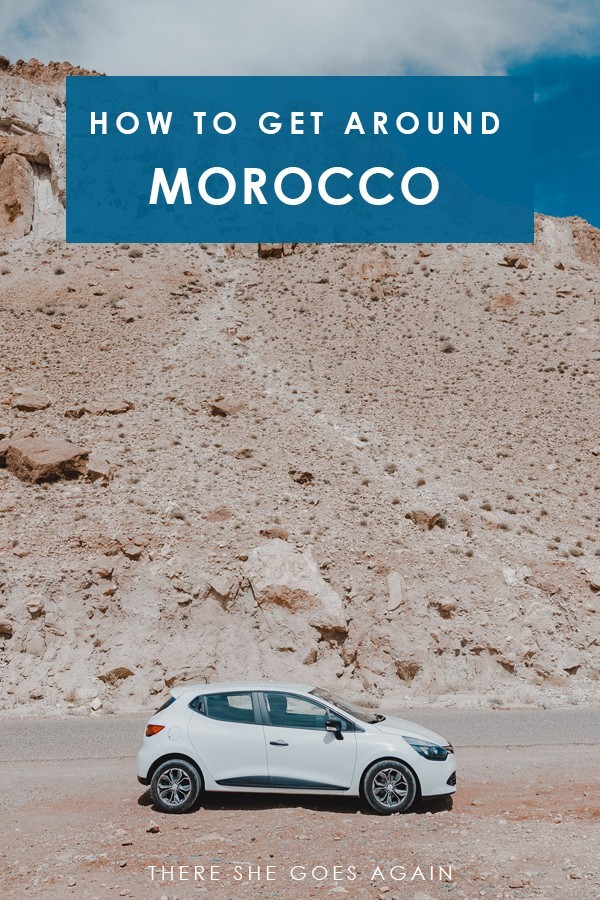