One of the big things I did while in South Africa was head to my first ever game reserve at Addo Elephant National Park. While visiting my friend, Ros, in Port Elizabeth, we decided to pack some lunch and head over to enjoy a day looking for some animals.

Now, because I didn’t realize this until maybe a year ago, let me just clear up what a game reserve or going on a game drive is exactly.

What does it mean to visit a game reserve in South Africa?

It does not mean driving around to hunt. It can, but for the most part game reserves are just hugely protected lands that allow their animals to roam freely. You can either go on a safari or a game drive. From what I’ve been told, safaris are much more in depth. You can do a game drive with either a guide or just you and your car.

Most of these parks take their conservation very seriously. There are very restricted paths you may drive on and warnings against offroading, which can damage your car and the animals’ habitats. No creature is too small or large for concern, whether it’s dung beetles or elephants. This should go without saying, but you may not touch the animals. And be careful whenever getting out of your car. There are only specific places you’re allowed to do so (and at least at Addo, they have a wall of shame of people who don’t listen), and even they come with warnings to be careful.

Addo Elephant National Park is unique because, as the name might suggest, it’s famous for having a large population of elephants. Ros told me it’s almost impossible not to see at least one of these guys here. It does have other members of the Big 5 (the rhino, Cape buffalo, leopard, and lion), but they’re much fewer in between.

It’s about an hour away from Port Elizabeth in the Eastern Cape, but it also has its own lodgings in the park if you want to make your way over.

Overall, we drove around from 9 to 3 in the afternoon, stopping off for a lunch of meat, cheese, and salad at Jack’s Picnic Site in the botanical reserve. It’s a very slow experience, so if you’re incredibly impatient, you might find yourself getting frustrated or bored. You’re never guaranteed seeing anything in these game reserves.

I, however, found it really fun, and I can see why people love going on them. There’s this little sense of adventure when you’re constantly peering out your window to try and find any little animal. Heck, we even enjoyed watching the dung beetles at work (Ros has a particular soft spot for them). Spend a few minutes getting the perfect shot and just observe the animals in their natural habitat. 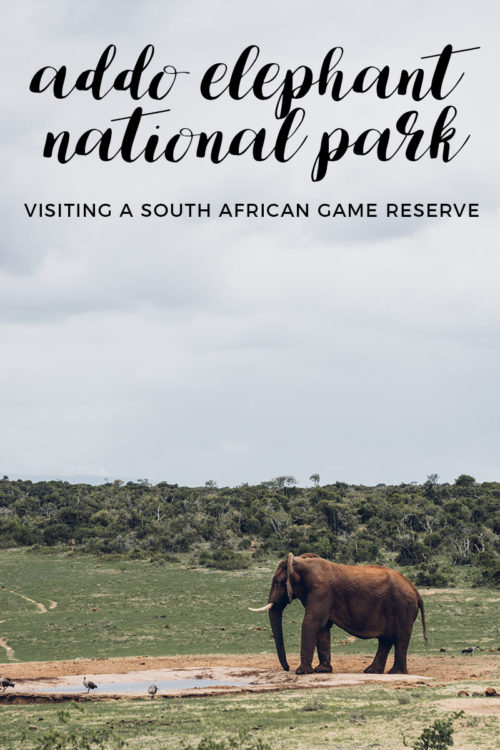