“Can I see your passport?”

I’ve just traveled for two days over three continents from Philadelphia to Johannesburg. It’s mid-morning. I’m in the same outfit I left Philly in, and I’ve slept a total of maybe three hours.

I still have another flight to Cape Town at 4:00 p.m., and I’ve finally made it all the way through customs and baggage claim. After exchanging my cash at a kiosk nearby, changing floors because the smaller re-check-in counter belt is broken, and lugging around my suitcase, carry-on, and purse, I’m in Vodacom to get a SIM card.

I reach mindlessly into my crossbody for my passport. I find its cover, a reddish fabric thing I got in Vietnam.

I freeze when I realize it’s not covering much of anything.

I then grab my wallet, thinking maybe I slipped it in there.

Soon the contents of my purse are all over the desk. Headphones. Phone. Wallet. Passport cover. Chapstick. Lotion. Glasses. Sunglasses. An embarrassing amount of Stride gum wrappers.

I look up in horror, and the woman looks back alarmed. “I think I’ve lost my passport.”

“Were you in the Bureau de Change?” she asks.

“I think so.” I have no idea what the Bureau de Change is. She points me to an elevator to go back and find it.

I rush over with my bags and find myself at the arrivals area. This isn’t where I had been. I see the small re-check-in counters through sliding doors, and I begin making my way over.

“You can’t go in there.” A security guard stops me before I can enter. There are a few dozen people standing behind and watching.

I explain to him that I’ve lost my passport somewhere between baggage claim, the bank kiosk, and the British Airways re-check-in counter. One of the men in green vests helped me at one point, and I definitely had my passport at the bank kiosk.

The panic is starting.

He sends in another guard to look at the bank kiosk and British Airways counter. The bank doesn’t have it, and no one is at the BA counter. I ask if he can find the man in the green vest who helped. Maybe he’d seen me with it.

He sends another guard in. Thirty minutes pass by.

I look like a crazy person. I don’t even think I’m really supposed to be standing there so close to the doors, but when you’re a young foreign girl with a look of sheer panic on your face, people tend to bend a little.

I’m almost certain I had my passport out at the BA counter, and that maybe in my state of exhaustion I left it on the counter while the man was on the phone. I ask the security guard if there’s a way to track him down, and he says no. I decided to try going to the upstairs BA counters to see if anyone had dropped one off.

Meanwhile, all my brain can do is repeat the St. Anthony prayer over and over again. You see, this is the way karma gets back at me for being so not understanding about most things in life. I’m a pretty solid, organized traveler, and I’m not very patient when others aren’t. However, karma likes to make sure I don’t think too highly of myself and throws these big shit moments to knock me down a peg or two.

There was the broken iPhone– twice. The mistake scheduling of our Vietnam train. Nineteen hours in soft seating from Ho Chi Minh to Da Nang when it could have been soft beds in a small room. Countless times of nearly missing my bus back from Seoul or Busan in Korea. Having my luggage misplaced on my way back from Philly to Seoul.

And now a missing passport within my first hour in Africa for the first time ever.

The British Airways employees are incredibly sympathetic. They don’t have a passport, and they tell me to go to the Info desk. The Info desk can call around and see if anyone has one. If worst comes to worst, they say, I can fly with my US driver’s license since it’s a domestic flight.

The police tell me to wait a few hours and come back. They don’t have one either. I also check the Lost and Found at some point. It’s a dodgy counter in the basement of the airport, in case you were wondering.

They tell me things like lost passports go to the police.

I go back to the security guard, who now looks like he wants to run away when he sees me coming. I’ve been polite but definitely annoying. No one has seen my passport, and no, there’s no way of finding the guy behind the BA counter.

I try to keep calm. People lose their passports all the time, right? When you have 14-hour layovers and long flights, even the sharpest person fades.

I decide to go back to Vodacom to get a SIM card, so I can at least message my friends in South Africa about what’s going on.

“Shame,” the woman says seeing me and hearing my story. My driver’s license is fine. She explains to the other women in Afrikaans, and they all mumble the same, “Shames.”

With my phone and a new adaptor in hand, I’ve all about come to peace with my lost passport. You can only exhaust all forms of search and say so many St. Anthony prayers in a state of manic delirium without totally losing it.

I need a cold drink and a game plan, so I head to a nearby café, order a Coke, and sit down to Google what to do. I’ll get to Cape Town and go to the embassy to get a new passport. I’m here for a month, so timing shouldn’t be an issue. It’s money and time I don’t particularly want to spend, but things could be worse.

Say what you want, but coffee has never revitalized me the way that icy Coke did. I decided to give it one more go, and retrace my steps from Vodacom to as far as I could go and see if maybe, just maybe it was there.

A security guard stops me after only a few yards, and when I explain to him what happened, he goes, “Honestly, just get a new one from the embassy. You’re American, it shouldn’t be too difficult. You’re just going to tire yourself out running around this airport looking for it.”

He’s right, and without realizing it, has just described my last four hours. I’m sweating now, still wearing leggings, a long-sleeved shirt, a jacket, scarf, and sneakers that are already causing blisters on my feet. For the record, it’s the middle of summer in South Africa. My hair is greasy and shoved back in a ponytail, and I probably have an ever so slight stench coming from me.

Zen, find the zen. I’ve given up hope. To the embassy on my Day 1 of exploration. Do not tell parents until new passport is secure in hand.

I go back to the police and the Info desk to give my phone number just in case. They both write it on scraps pieces of paper, and the police muse over wanting Christmas presents. Helpful.

I go back to the BA counters to double check that it’s okay I fly with my driver’s license. I still have three hours until I fly, but I just want to be slumped in a waiting chair until it’s time to go. I’m so tired, it hurts to keep my eyelids open.

As the woman types in my name, she looks up surprised.

“I’m not sure. But you see the counter numbers. On this side just walk over, and you’ll see 127.”

All of a sudden, I’m awake again. I all but skip over to the check-in counters. There’s hope!

No one is sitting at Counter 127, and next to it is the Club line only. I glance over at the Economy lines, now well past the queue area, and decide to take my chances of waiting in the shorter line in front of 126.

I explain to the woman about my passport. She reaches behind 127…

…and all of a sudden a beautiful, shimmering ray of light shines down.

There it is. That tiny, navy blue book. The gold letters and emblem printed on the front. The American illustrations decorating the inside pages. Stamps and visas from Korea, Thailand, Cambodia, Japan, Vietnam, Indonesia. All my personal information. A perky photo of 20-year-old me coming off a summer of Crossfit and looking forward to a semester in Spain.

I realize then just how disappointed I was going to have been losing this guy.

And how happy I was to have him back.

Not only do I have him back, but the woman lets me check-in at her counter instead of going back to the economy line. I’m all but dancing.

I knew I was right, too. I left it at the smaller BA re-check-in counter, and the guy brought it up assuming I’d be headed that way anyway.

Yes, yes, this all could have been over 3 hours and 55 minutes earlier than it did.

I’m back up a peg or two, elated by having my precious passport back and getting to skip at least 30 minutes of line waiting.

Don’t worry, though, I almost missed my flight because I had forgotten to change the time on my phone. 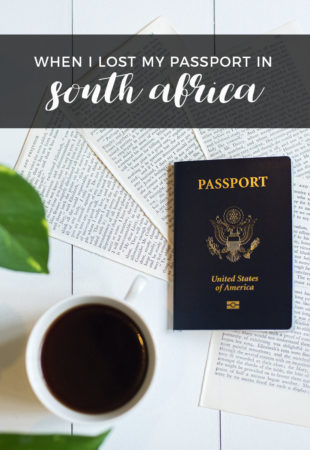