One of the big things I’ve been wanting to do here was to truly learn how to make some of my favorite dishes. That’s why I’m excited to share with you guys my experience taking a Korean cooking class in Seoul sponsored by Trazy!

In the three years of living in Korea, I’ve experienced my fair share of Korean food. From first discovering BBQ as a student at our favorite “Yelling Man Restaurant” to becoming a bit of a ddeokbbeokki snob, I could go on about how much I love the food here.

The only problem is, I’ve never properly learned how to make any of it. I realized this very sad fact when I returned home after my Namwon contract and tried to make hotteok on my own. Let’s just say it was a very dry, very sad failure.

Sure, I’ve had some cooking experience, but none of them really taught me how to do anything. A lot of it was being relegated to chopping vegetables, and even then I was scolded for not cutting properly.

One of the last things on my list to do in Korea was to take a proper cooking class where I could ask the teacher questions and get a full English explanation and recipe guide. As you guys have seen frequently, I’m always linking to Trazy* for tours and random trip logistics, so I thought I’d reach out and try one of their classes while I was in Seoul.

Trazy* is one of the main companies I link to because they have so many tour options in Korea that I don’t see on a lot of the more general travel sites. They also have a lot on their site to help with planning a trip to Korea, like renting SIM cards or arranging airport shuttles. On occasion, they even have discounted tickets!

Anyway, I settled on their Korean Home Food Cooking Class in Bukchon Hanok Village* because the dishes included two of my favorites — bulgogi and pajeon. Check out what to expect below!

I promise I’m working on a giant post of my favorite Korean food. I just need to finish taking all the photos! Anyhow, bulgogi and pajeon are by far some of my favorites, so here’s a little info on both of them. 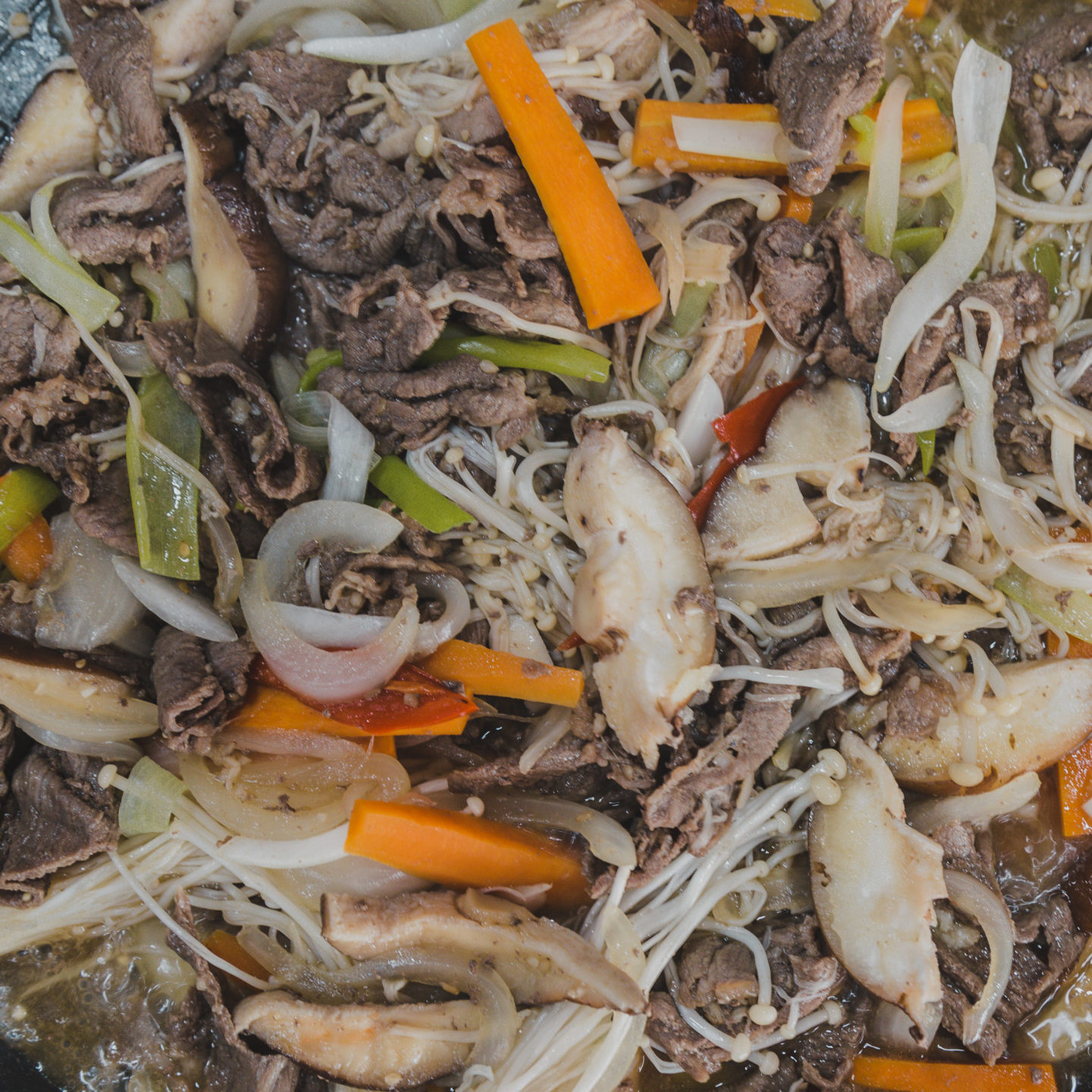 Bulgogi actually translates to “fire meat” because you typically, you know, cook it over a fire of some sort. It’s made of thinly-sliced beef marinated in a delicious soy sauce mixture and then grilled.

You can eat it either with some sauce and wrapped in a lettuce or just over a bowl of rice. It’s easily a Korean classic, and a lot of times when I ask my students what their favorite food is, I get a chorus of bulgogi in response! 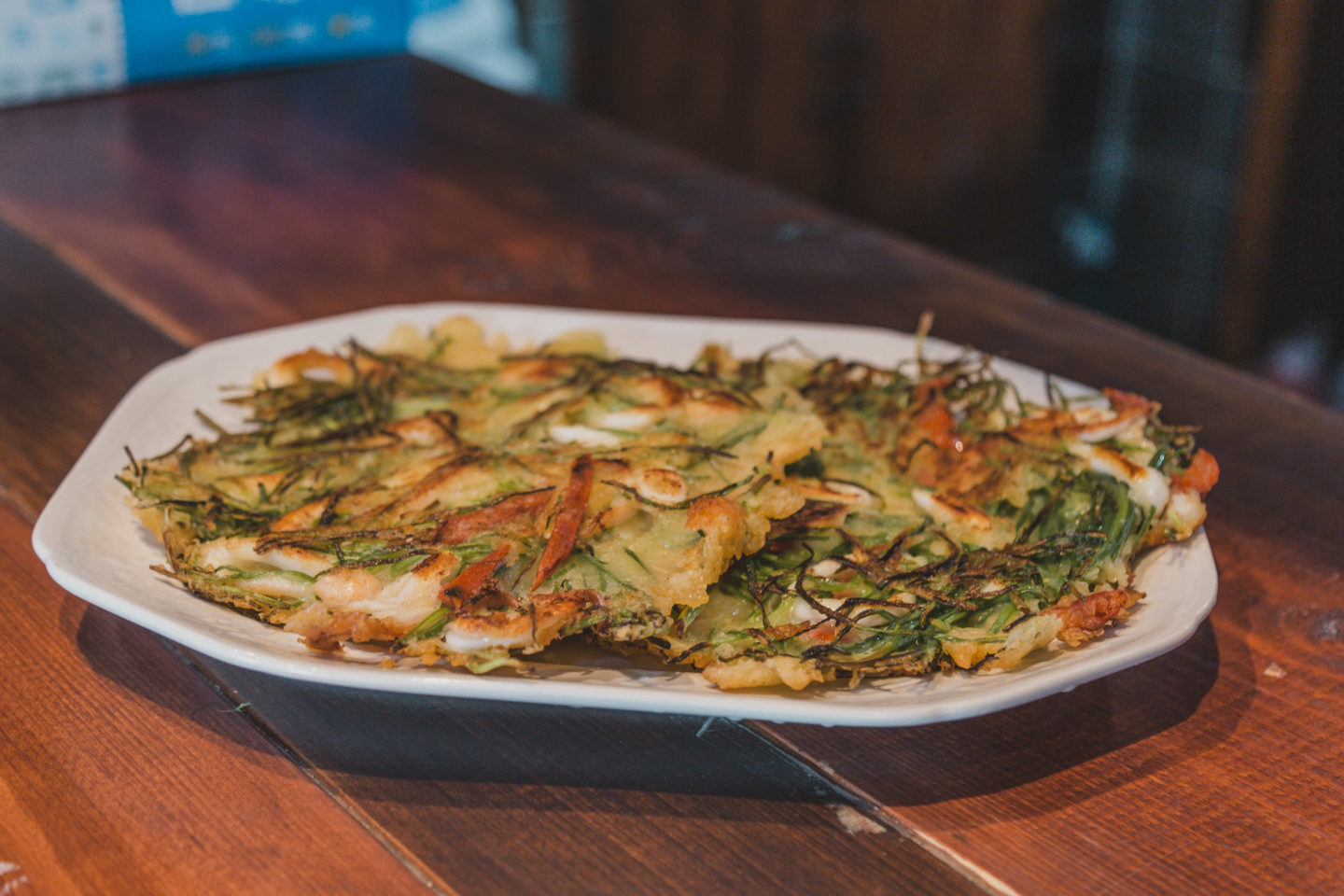 Nothing beats a good pajeon. Especially if you’re camping or hiking and drink some makgeolli with it! Pajeon is kind of the catch-all phrase for different kinds of jeon, which usually translates to pancake. Pajeon specifically is made with scallions, the “pa.” Other popular ones include kimchijeon, made with kimchi, and haemul pajeon, made with seafood. We made the seafood style at our cooking class. 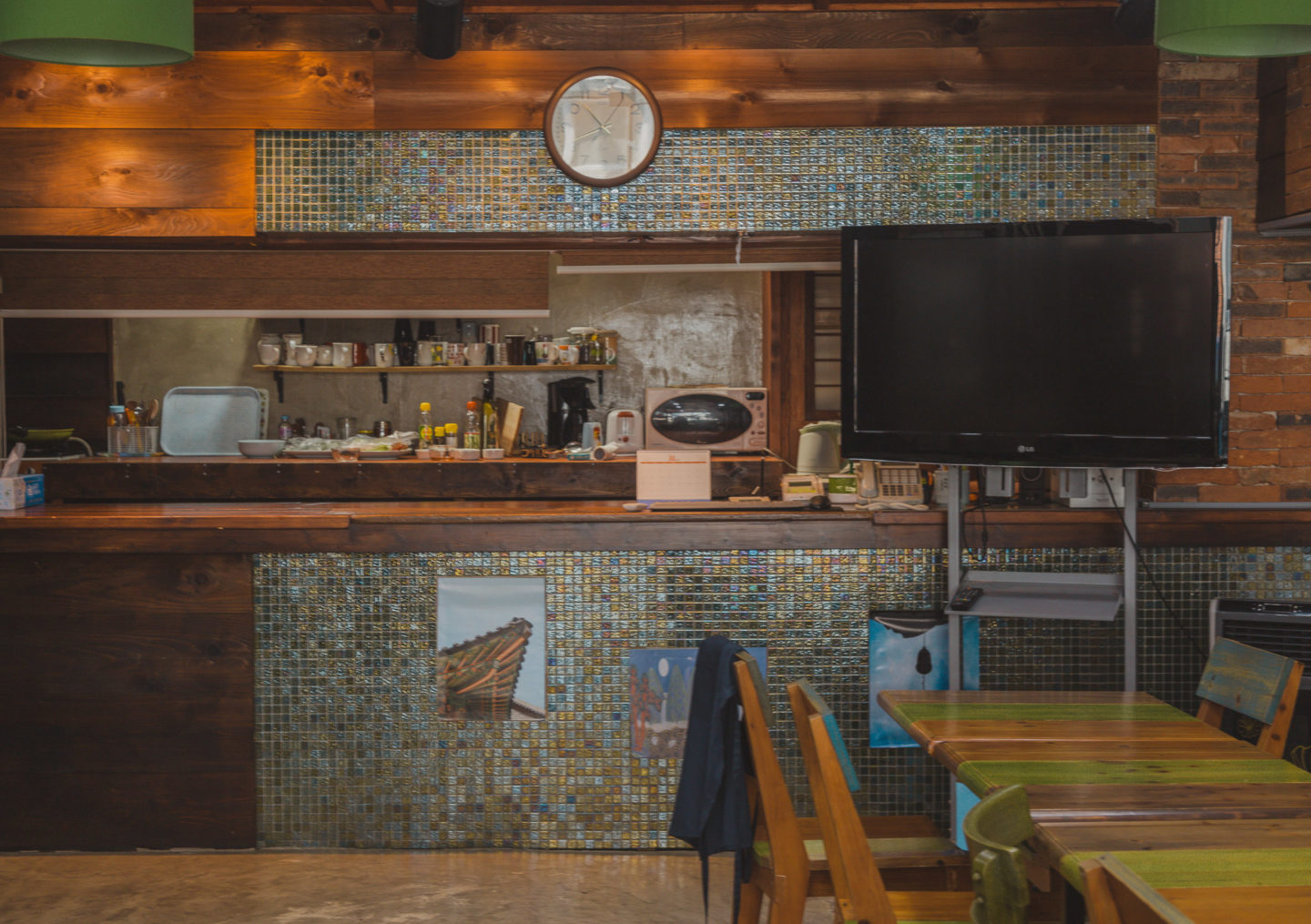 My friend and I met our instructor, Shin Myeongsuk, near Anguk Station around 10:30 am. We then took a local bus to the nearby cooking studio in Bukchon Hanok Village where she had all the ingredients set-up and ready to go. 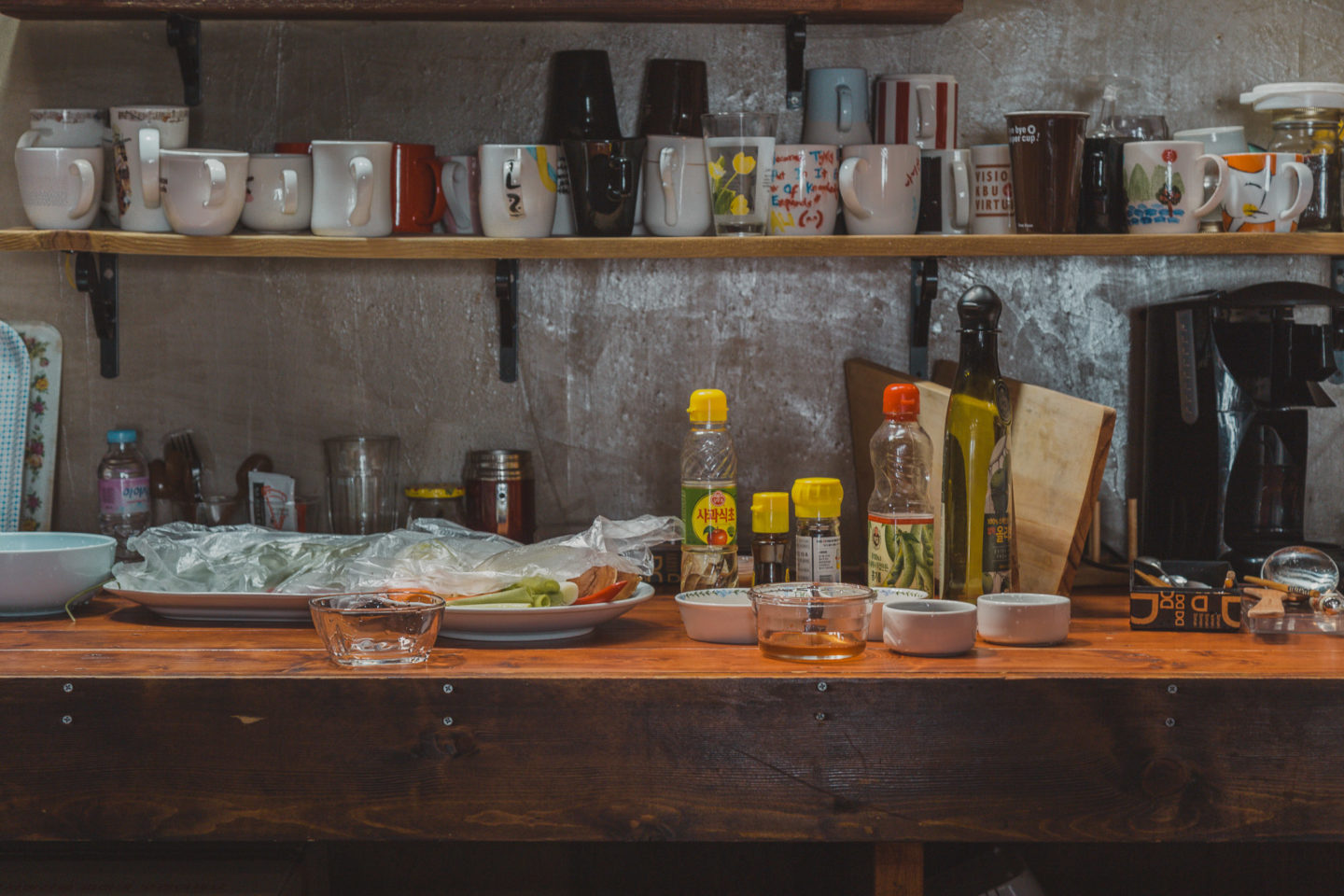 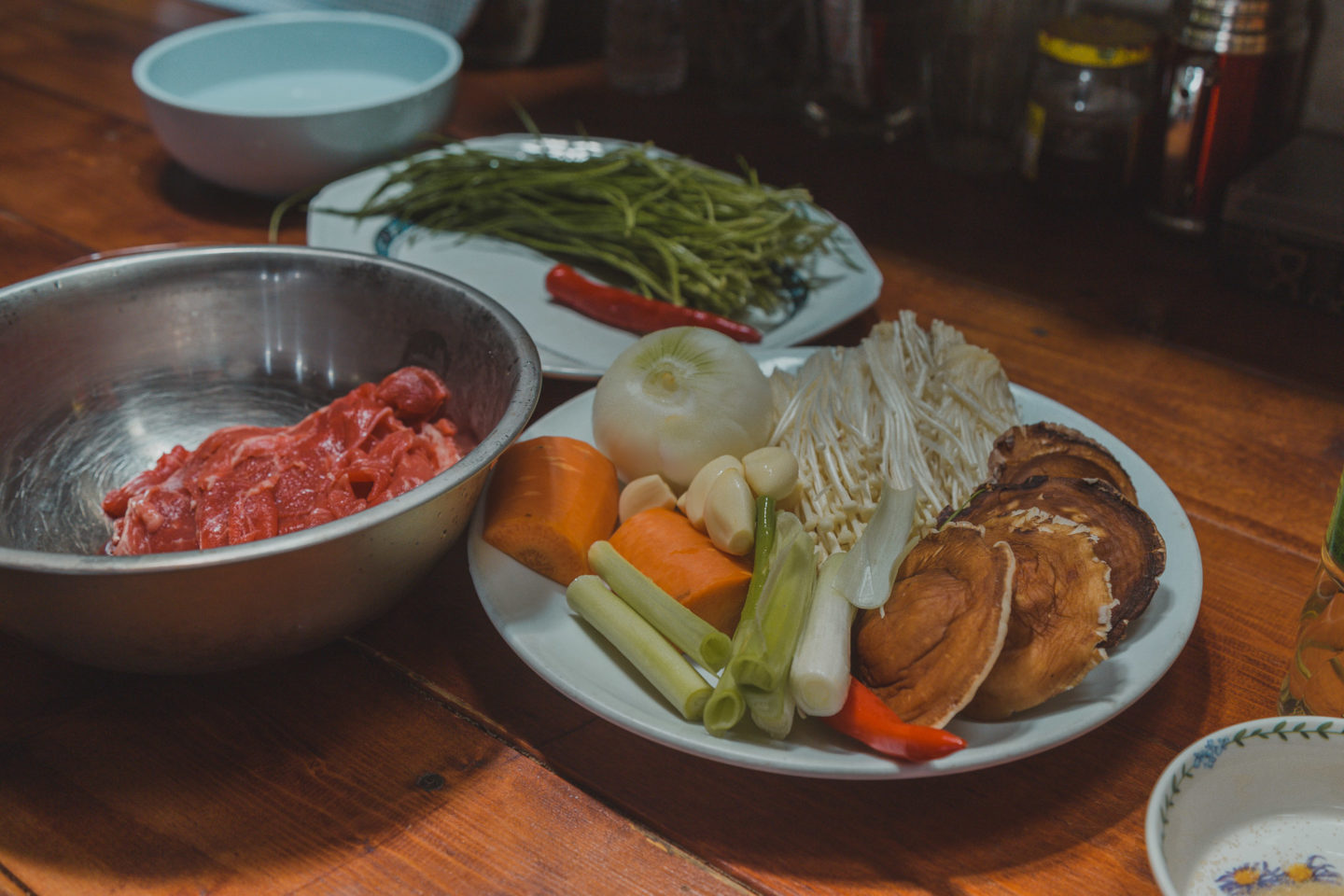 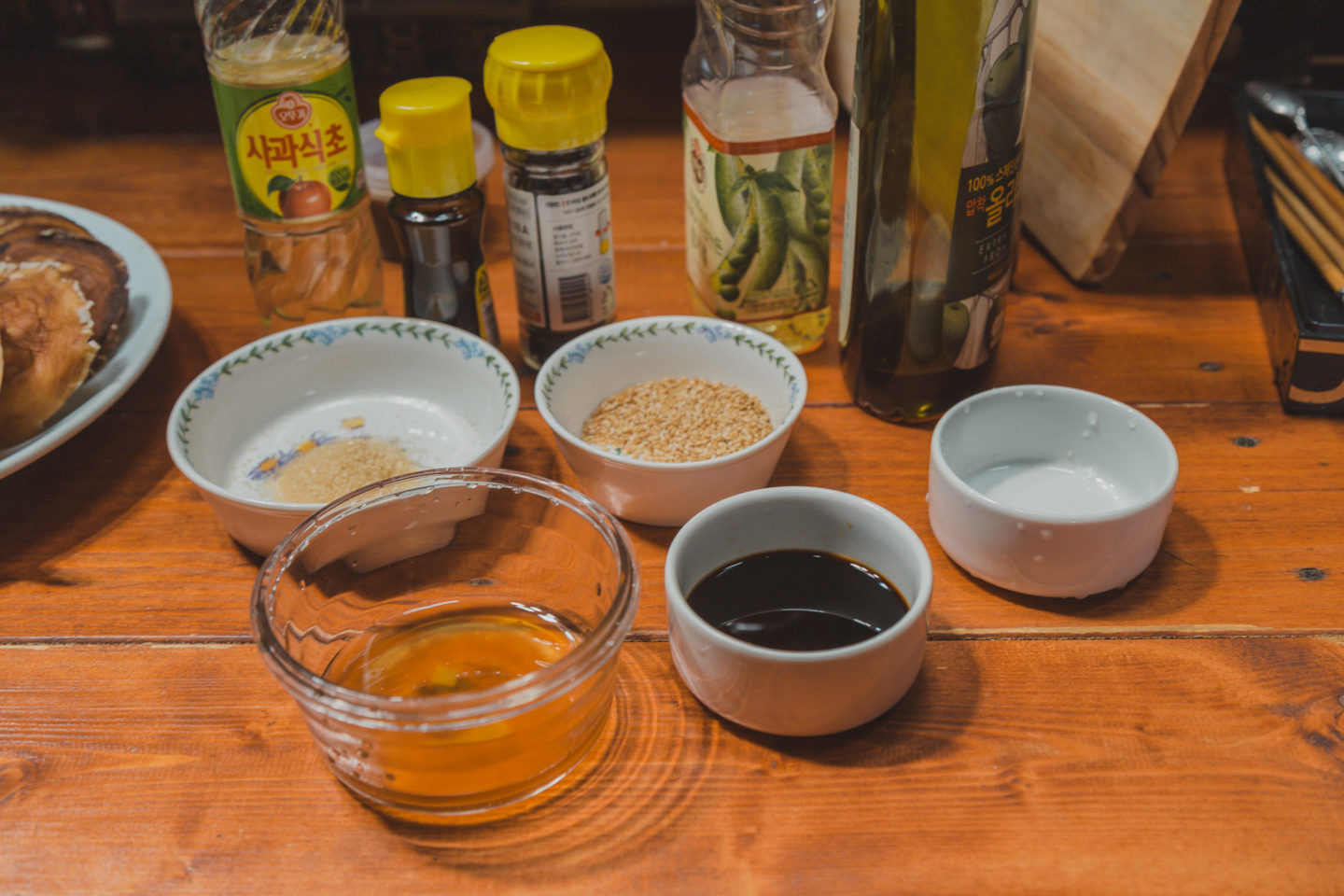 We started with the bulgogi first since it has to marinate for a bit. Myeongsuk stressed the importance of making sure to completely blot the beef of its juices so it could soak up everything better. 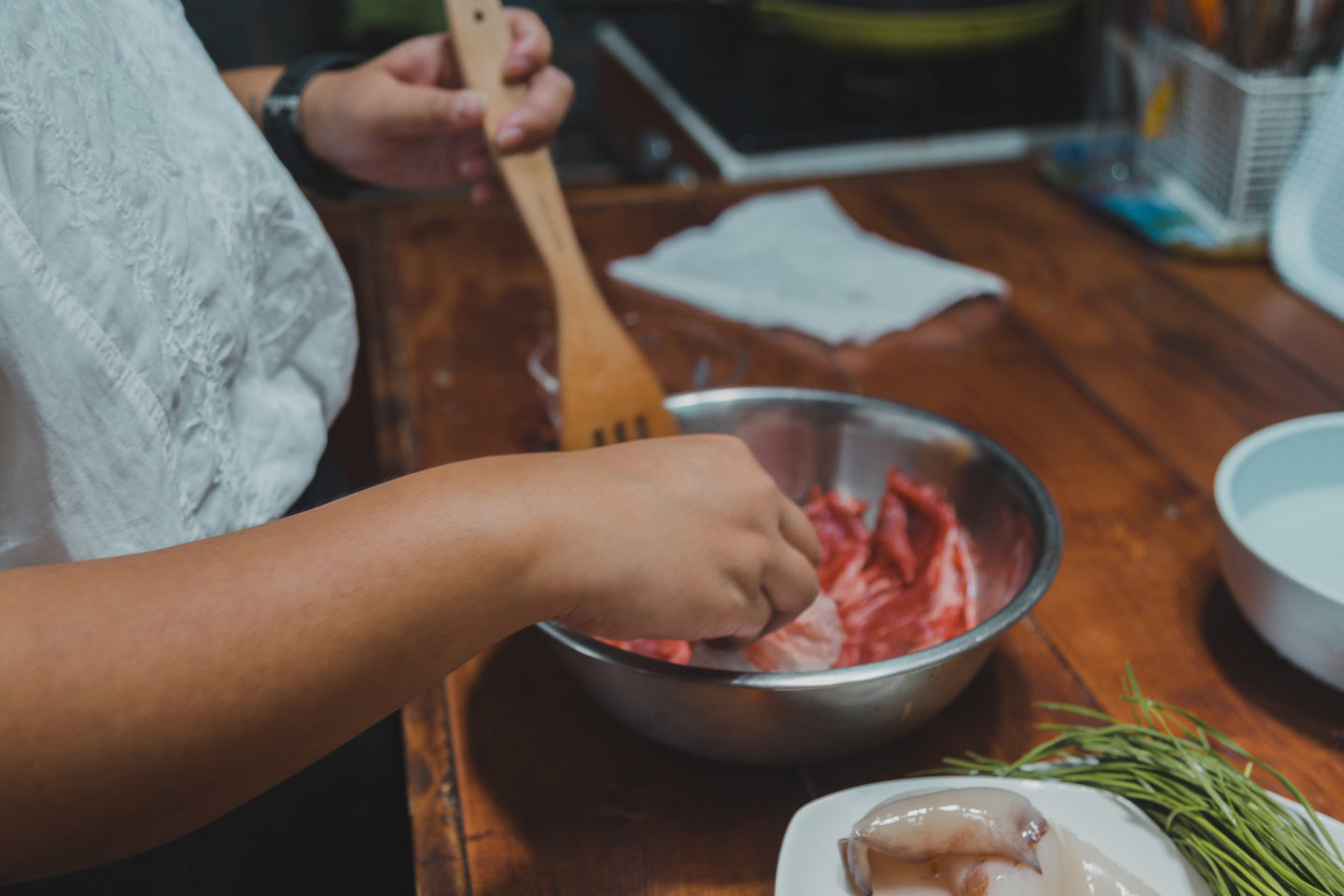 We then chopped and mixed all the ingredients for the marinade together in a bowl. I won’t tell you all of them here, but there is a little secret one Myeongsuk uses for hers, and she’ll send you the full recipe after class ;).

Once it’s mixed, you can pour it over the beef. 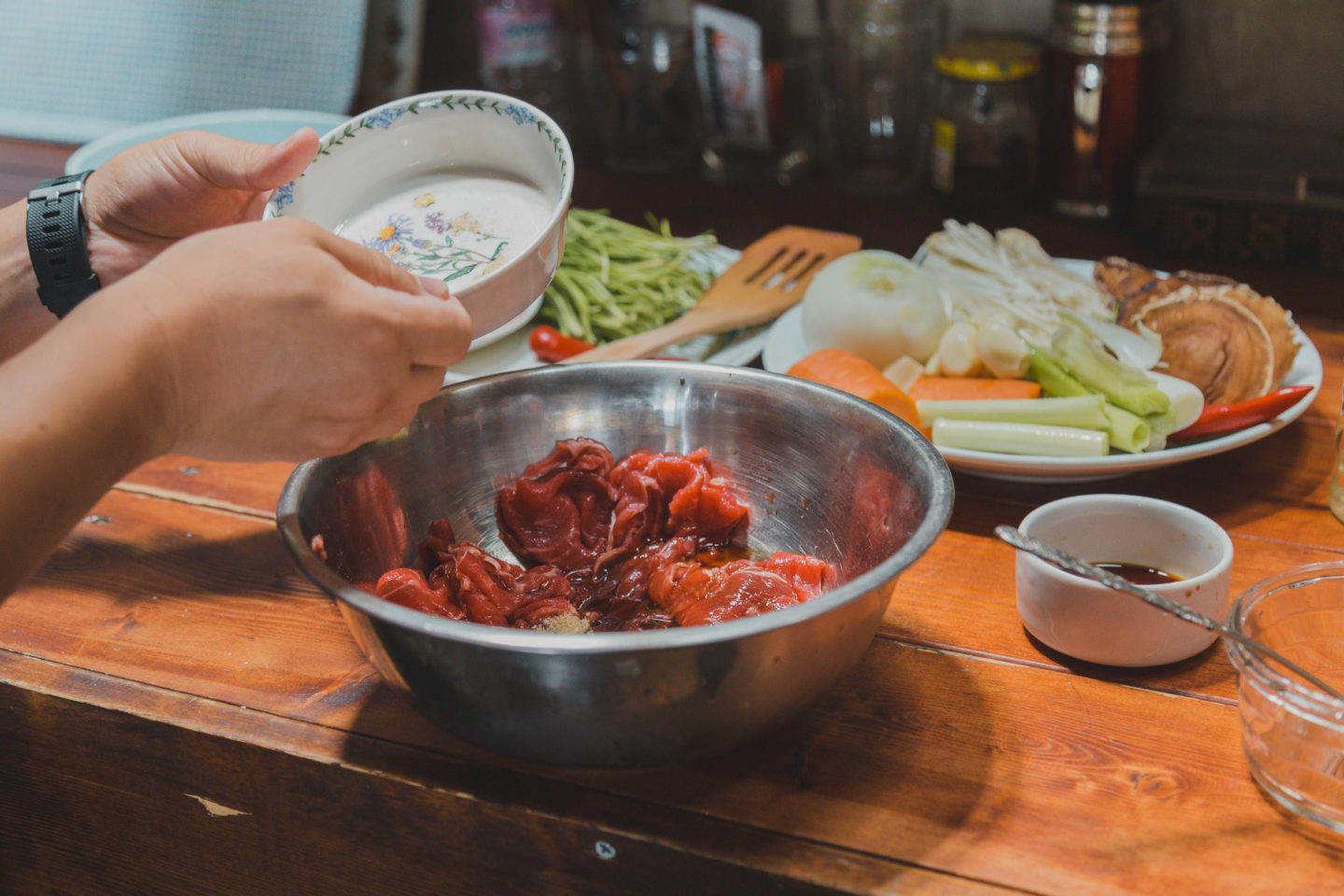 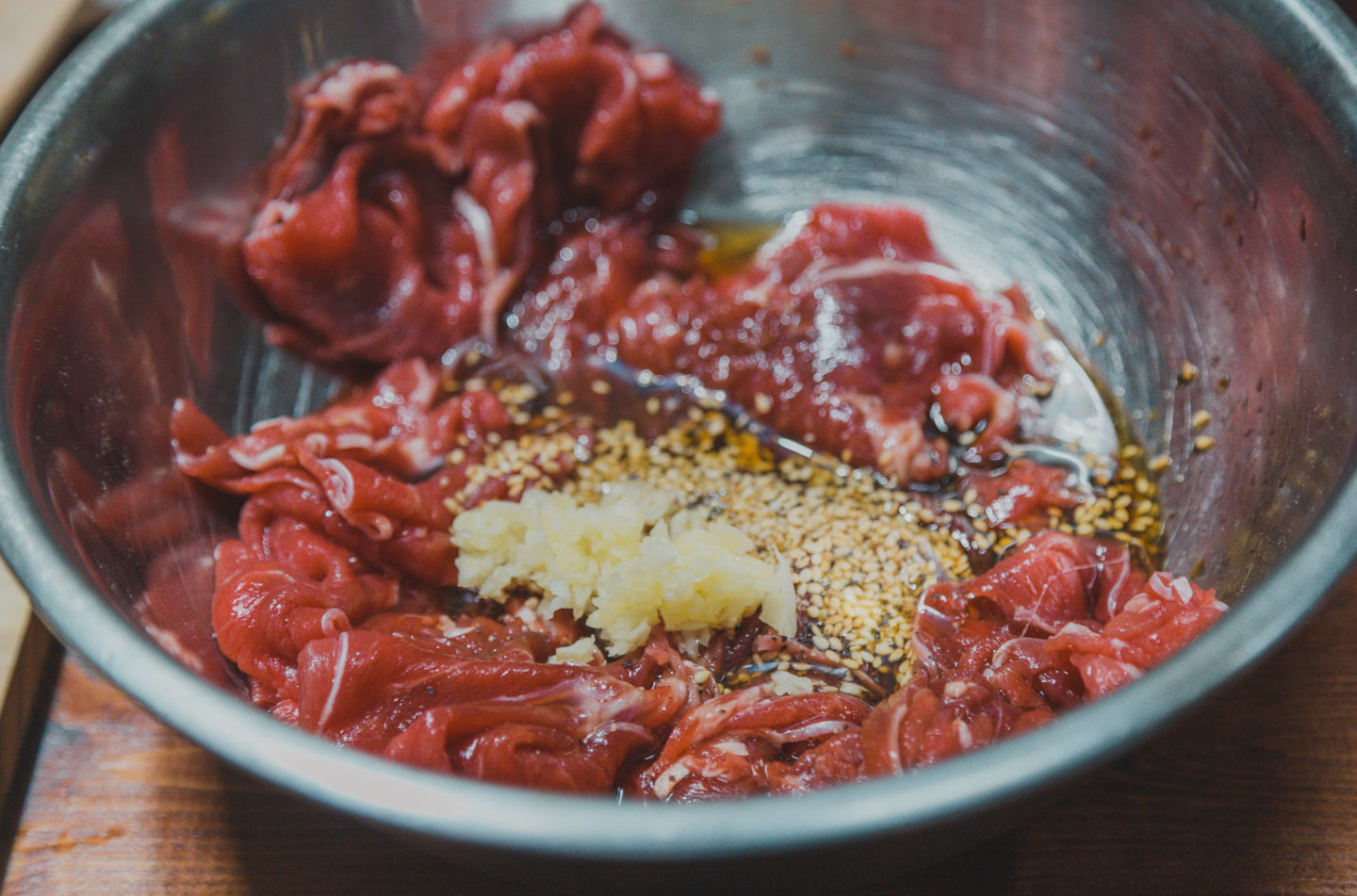 You then want to make sure you really massage the marinade into the beef! You can’t just let it sit or else the flavoring will be uneven. It reminded me of kimchi making when our ahjumma tsk-tsked at us because we weren’t spreading the sauce evenly enough over the cabbage. 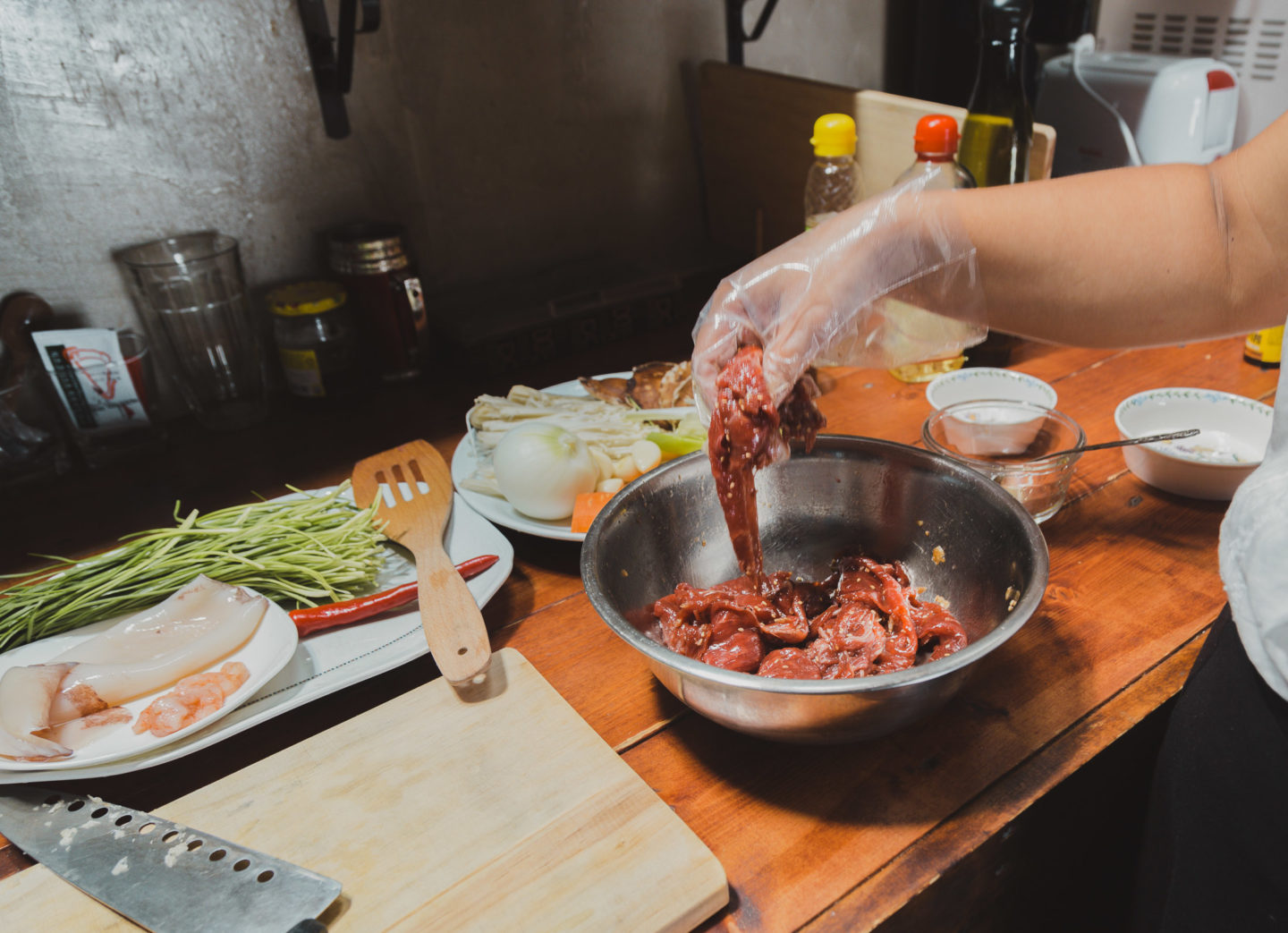 While the bulgogi marinated, we worked on the pajeon. First, you want to cut all the ingredients into small, thin slices. Jeons can have different ingredients and ours included some chives, shrimp, squid, and red pepper. 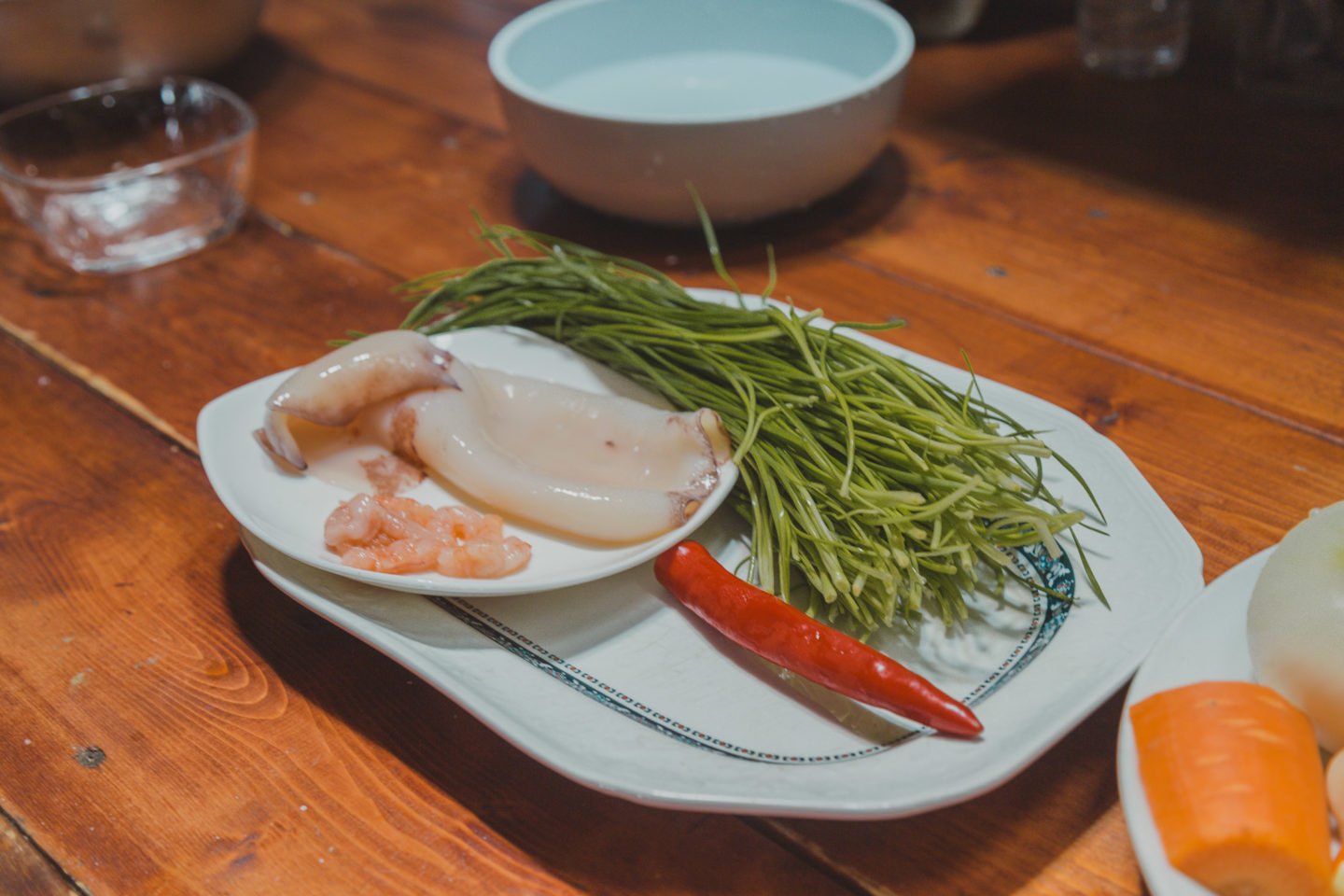 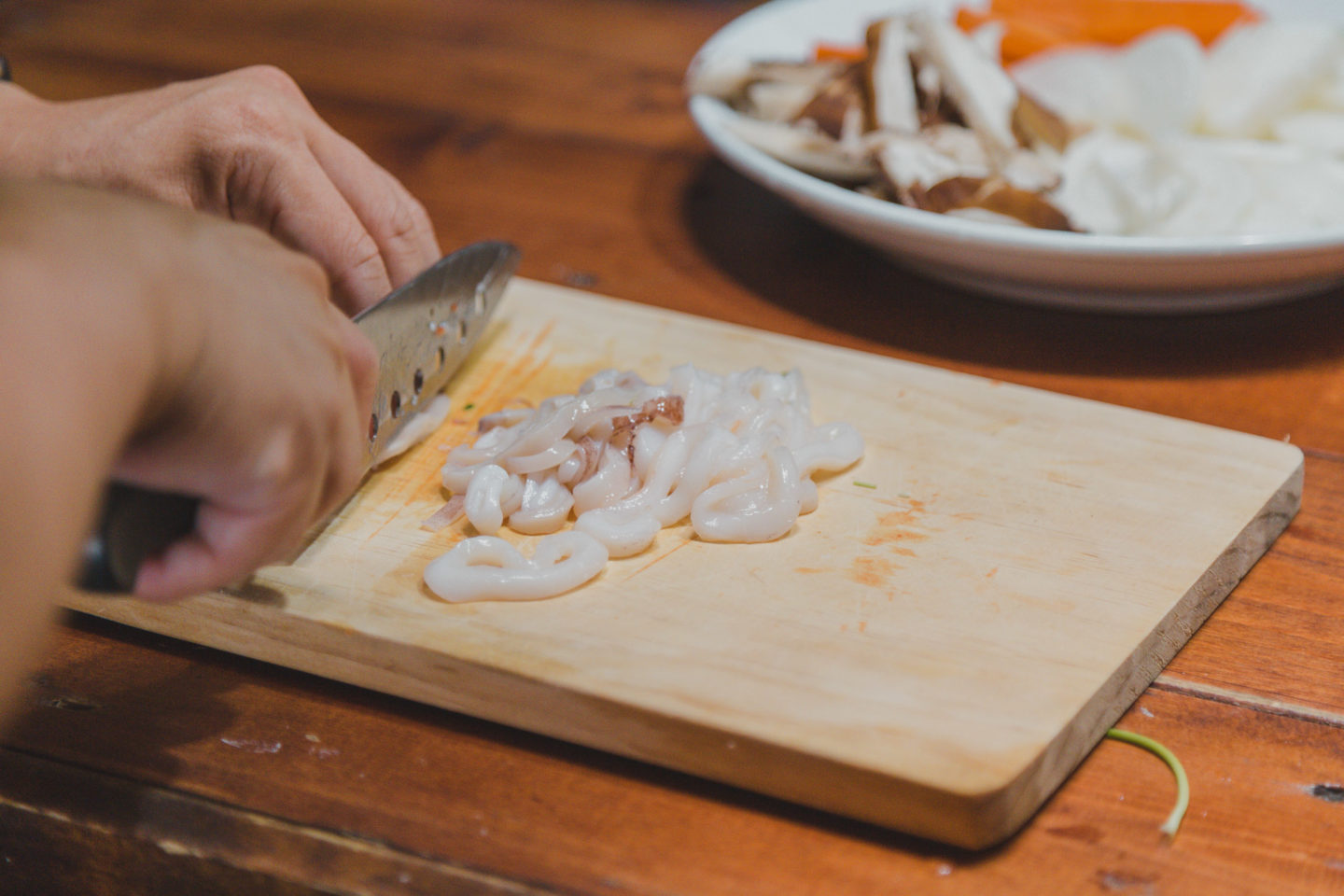 While we cut up the ingredients for the jeon, we also cut up the vegetables that we’d later grill with the bulgogi.

Next, make the base for the pajeon. Myeongsuk had a premade mix. However, if you can’t find any jeon mix, you can substitute flour and season with salt and pepper. 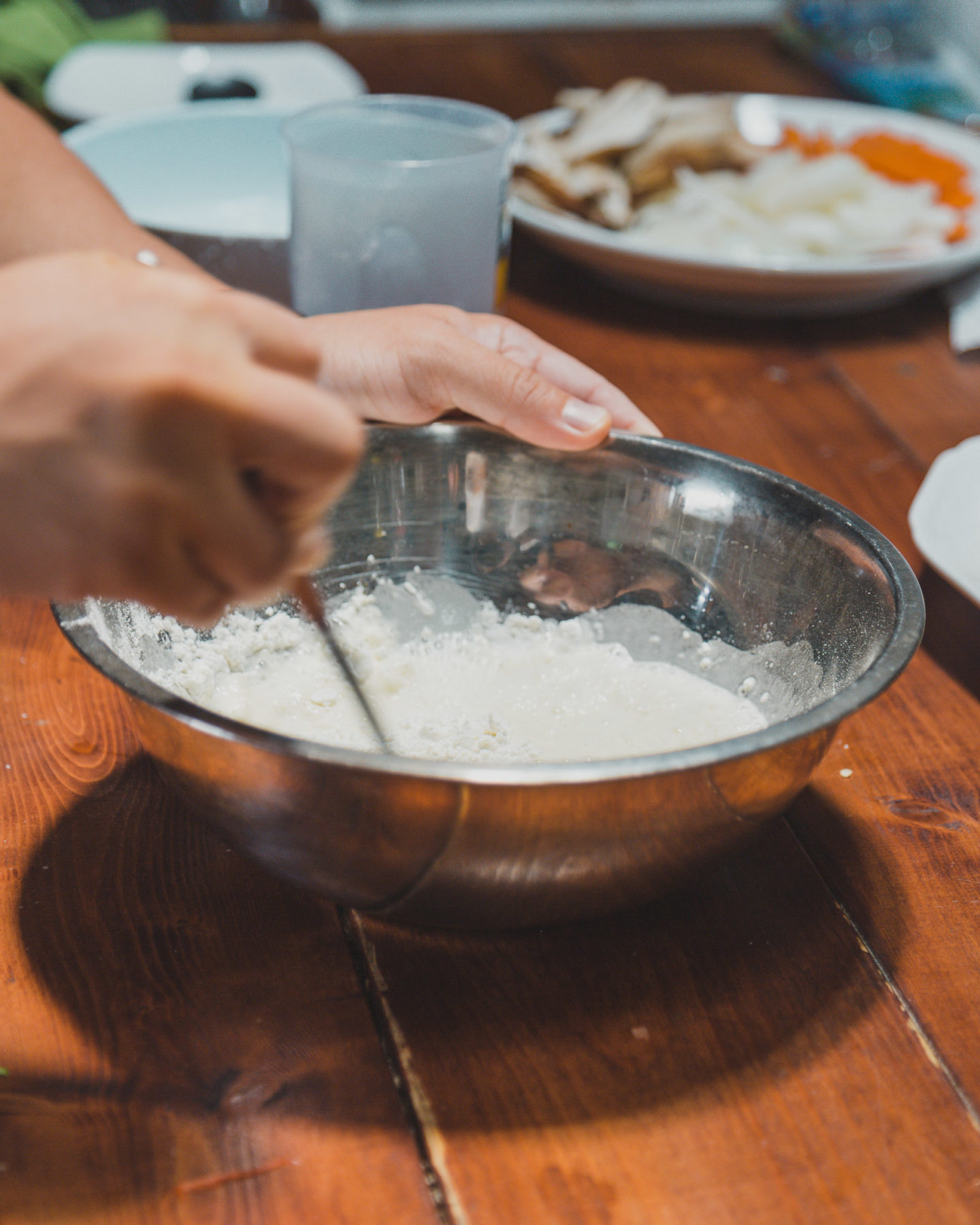 Then you add everything together. 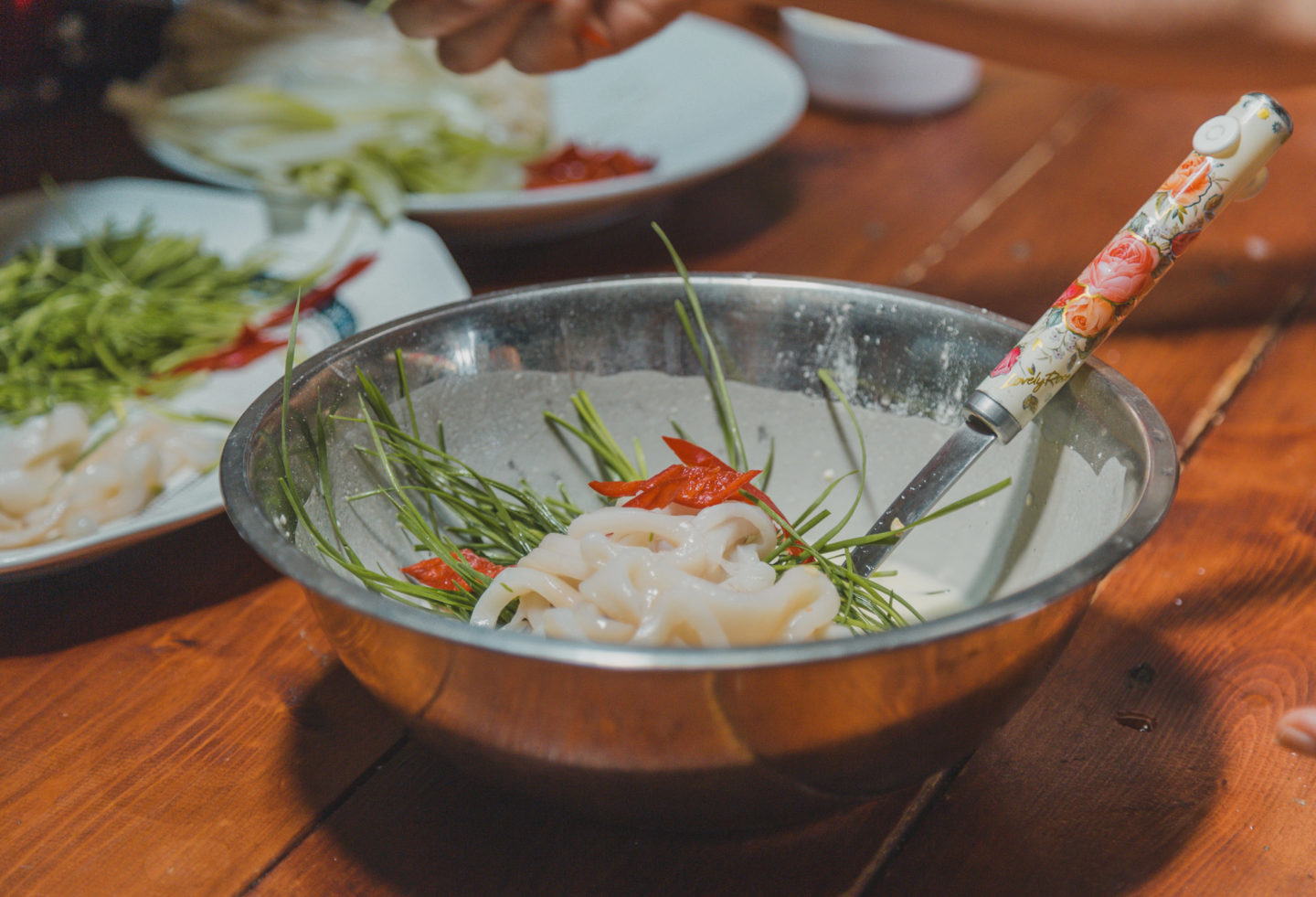 Once you’ve mixed all the batter together, spread it evenly over a pan, kind of like you would a pancake. Use vegetable oil and make sure the batter is thin enough that it fries evenly and comes out just a touch crispy. 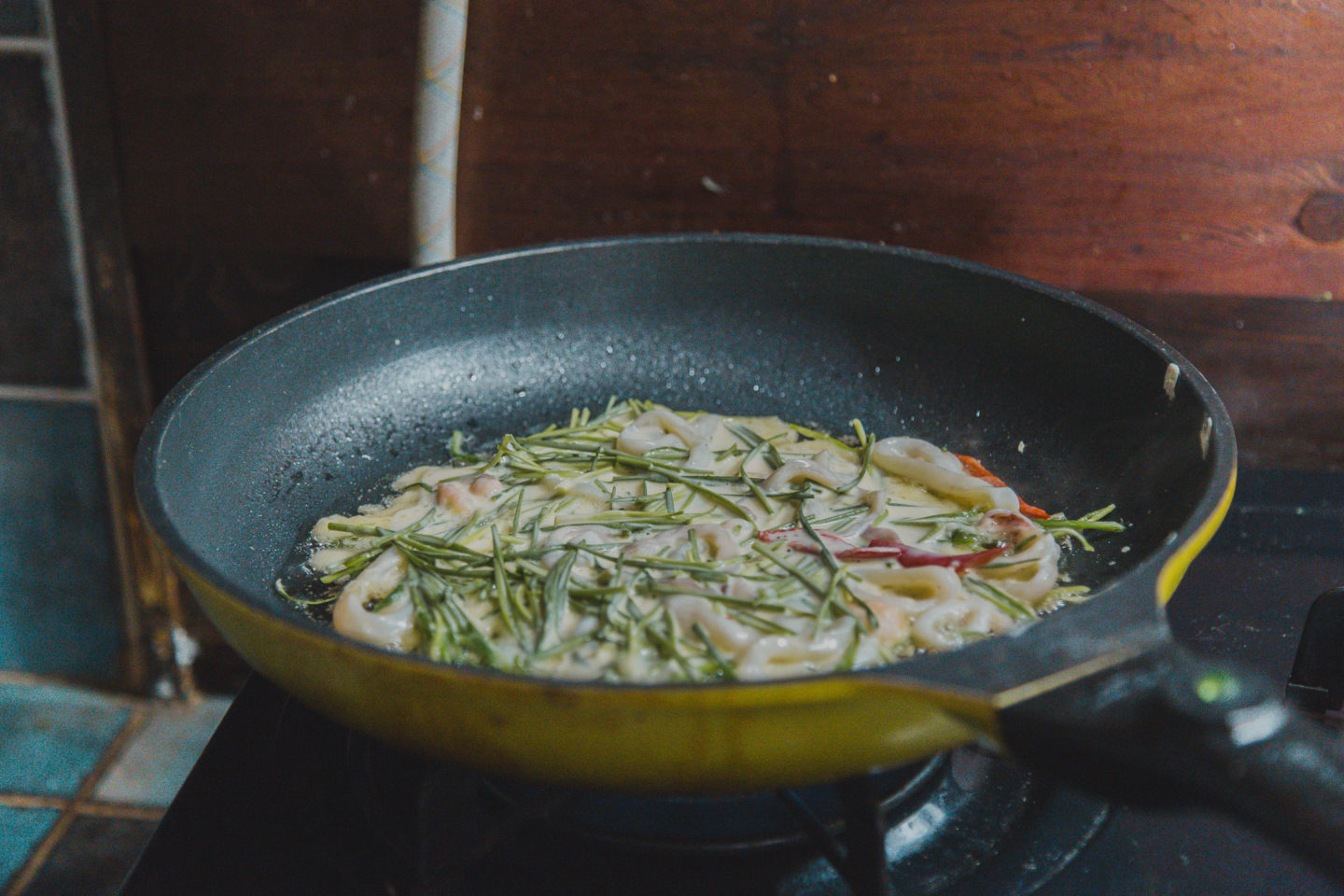 This is what it looks like when it’s done! I’m sure I’ve posted pictures of pajeon elsewhere on this site. Pretty much every time I’ve gone hiking or somewhere outdoorsy in Korea, I’ve eaten it! My friend, Stacey, jokes that she only ever eats it with me. 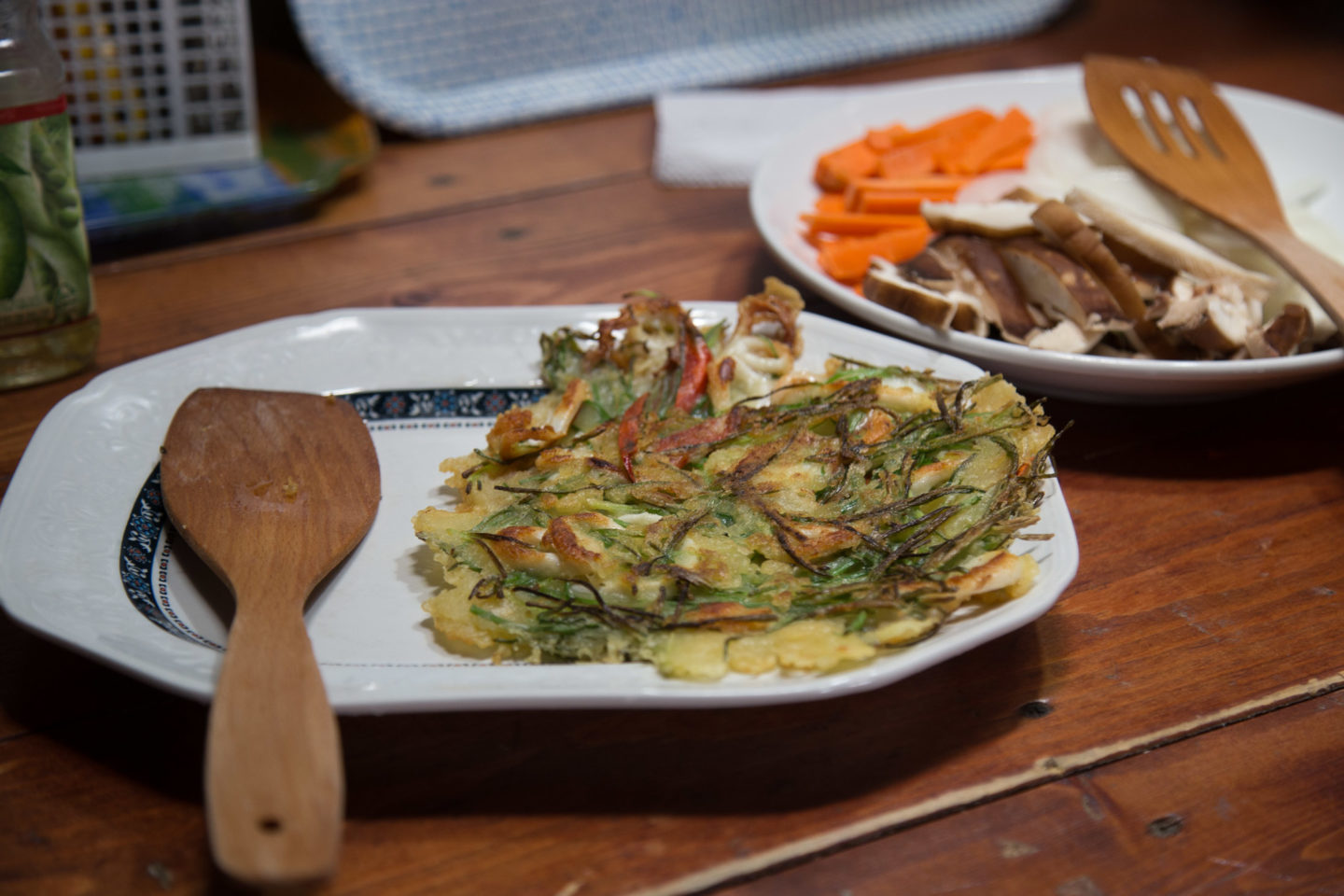 Now that the pajeon was done, we set up the main eating area. Myeongsuk took out a portable grill to cook the bulgogi and vegetables altogether. 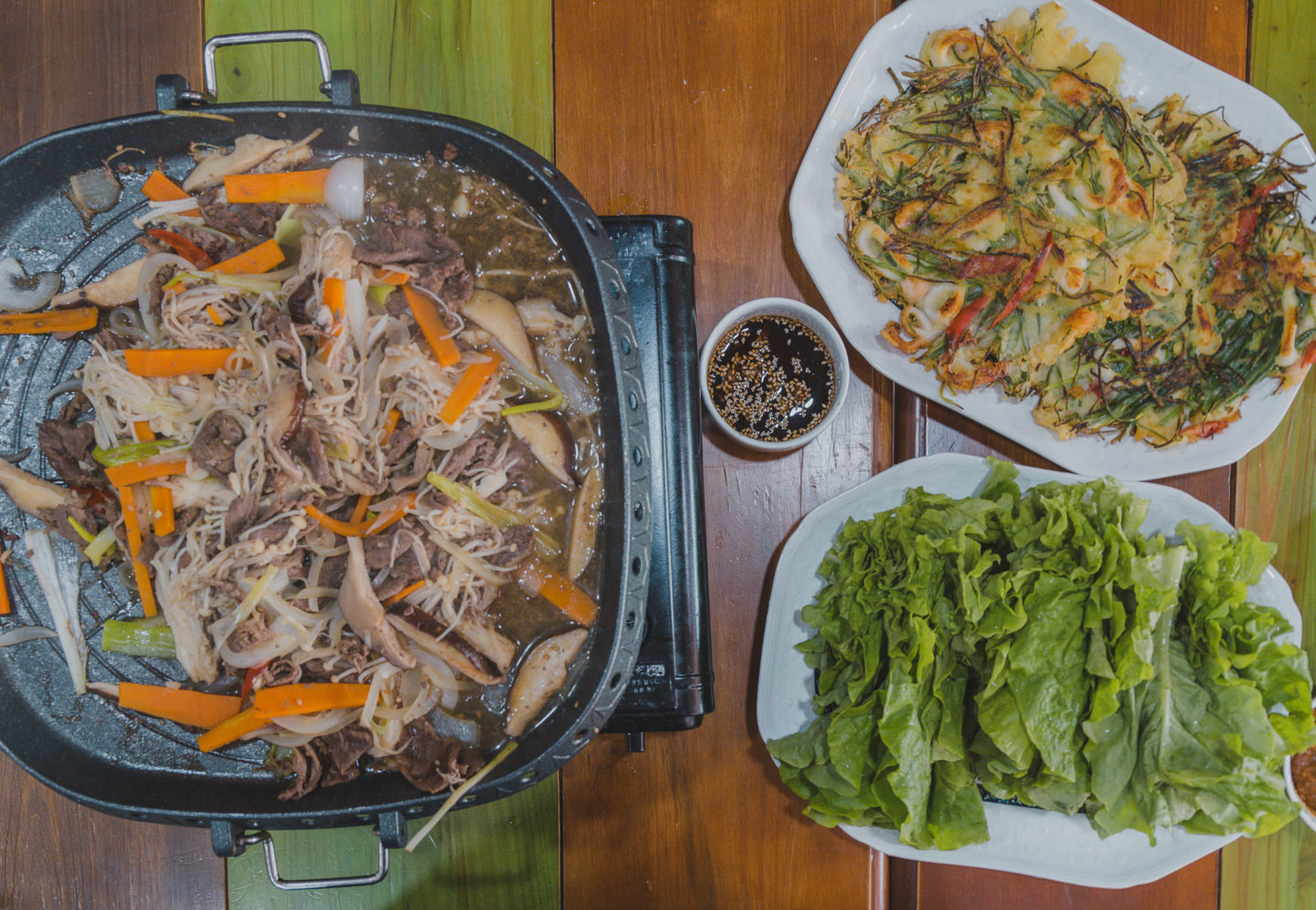 For the bulgogi, we had lettuce and rice with some doenjang sauce while the pajeon was served with a soy sauce mix. The bulgogi should be ready to go within minutes, and you can just eat it right off the grill.

There was so much delicious food, and Myeongsuk even brought out some cherries for dessert. We had food babies by the end! I was originally planning on walking to Gyeongbokgung afterward. However, between the impending food coma and the heat, I napped in the charcoal room of a jimjilbang instead!

Thoughts of the Class

The class was exactly what I was hoping it would be. It was relaxing and intimate, and we were able to ask Myeongsuk about the different ingredients or why we should cut things a certain way, and she could tell us. Also, since she’s a mom of two kids a little bit younger than us, it felt like we were learning from a neighborhood mom instead of a more formal class setting.

The class is around two and a half hours, so skip breakfast and fill up for lunch. If you can stave off a food coma, you’re right in Bukchon Hanok Village and near Gyeongbokgung or Changdeokgung, so it’s the perfect location to then do some sightseeing! 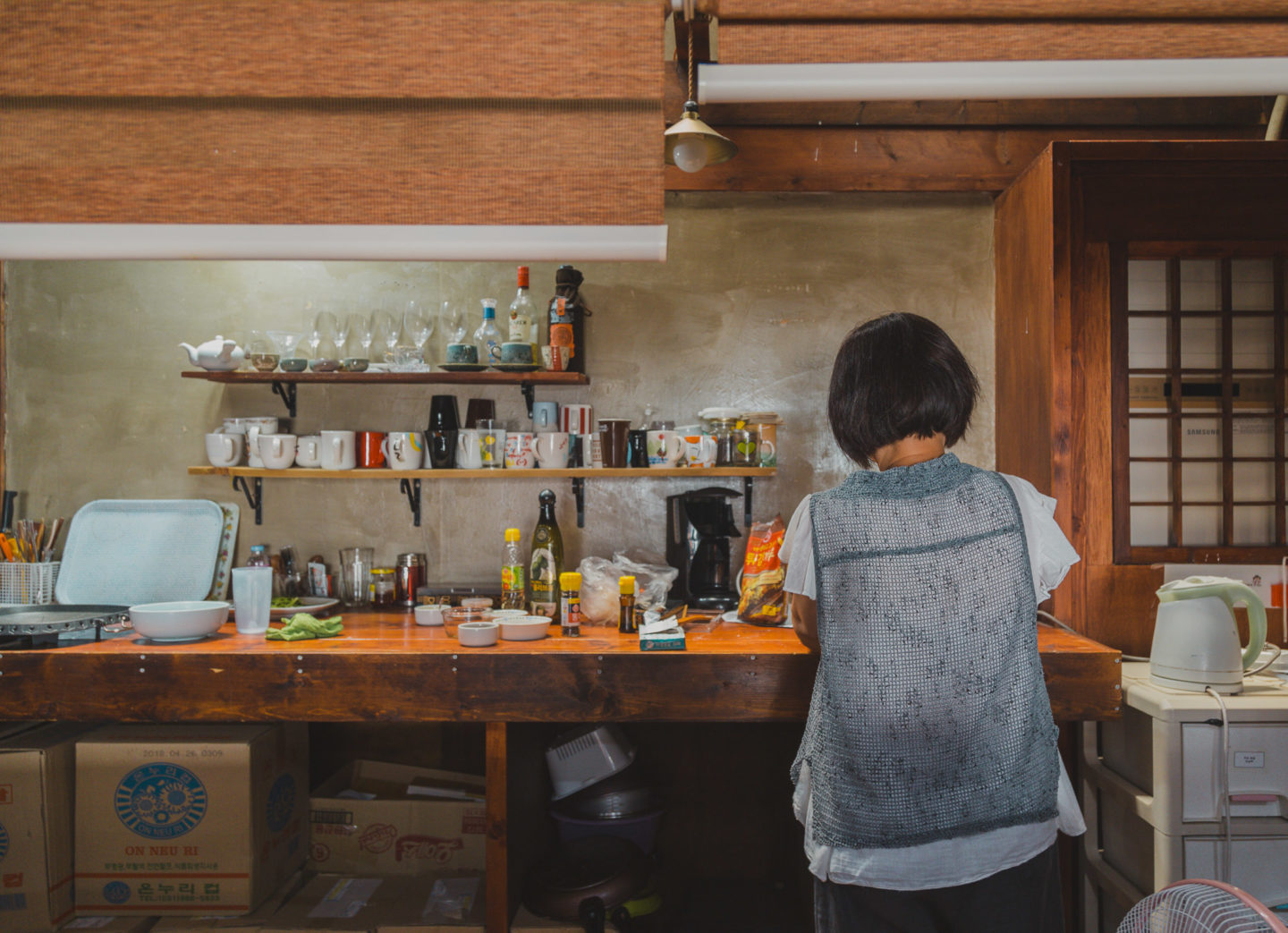 You can book the Korean Home Food Cooking Class in Bukchon Hanok Village on Trazy*. There are also shorter options where you only make bibimbap or bulgogi by itself. Just make sure you have at least two people and book at least three days in advance.

If you don’t eat meat or seafood, you may want to book the bibimbap class. Bibimbap is easier to make vegetarian-friendly.

Some other Korean cooking classes include:

For those of you who just want to eat, here are some food tour options:

Thanks again to Trazy for sponsoring this fun class and helping me cross off a little Korean bucket list item! Have you guys had Korean food before? What’d you think?

If you’re traveling to Korea for the first time, check out my South Korea travel tips post and join my Facebook group! 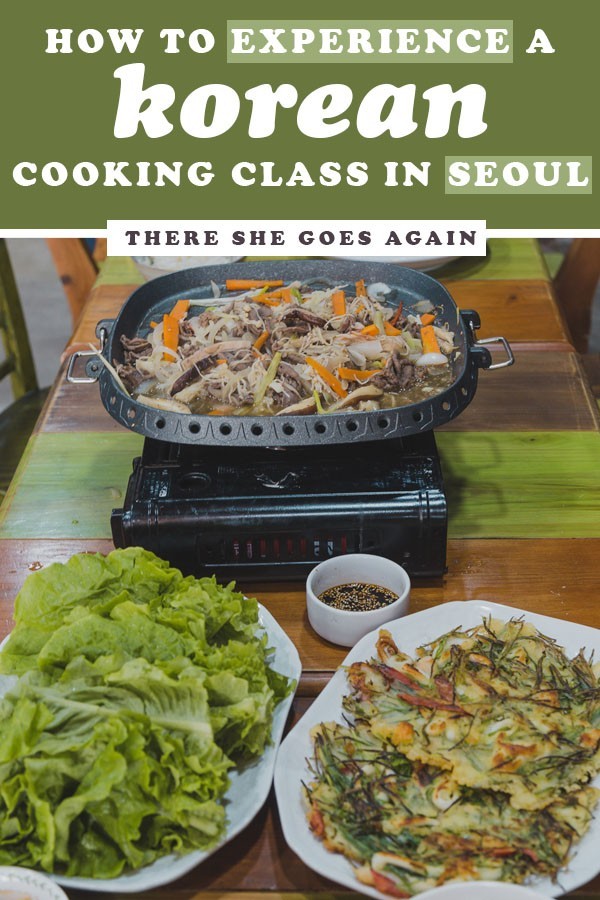