As the world gets a little smaller, and travel becomes easier and easier to do, there’s bound to be more tourists, travelers, wanderers, and explorers in all sorts of areas in the world. As we continue to explore, it’s important to also be a mindful traveler. Don’t just roll in, take a few pictures, and roll out to brag to your friends about where you’ve been. Don’t just eat at franchises, leave waste in your wake, and throw money at all sorts of scams. Here I’ve laid out a few thoughts on what exactly it means to travel more mindfully and thoughtfully.

Eat at “mom and pop” shops as often as you can.

I know it’s easy and comfortable to run into the familiar yellow and red arms of a McDonald’s franchise, but try to veer off the main road, sit on a plastic stool, and eat from the “mom and pop” shops. They’re often times more delicious and authentic. Set aside whatever overly hygienic concerns you have (I promise, you’ll be fine), and enjoy the experience. Trust me, steamed meat dumplings taste much better by the little shop near my house than they do ordered at a fancier Korean restaurant.

Unplug everything in your house before you leave.

Being environmentally friendly is just as important to being a mindful traveler as anything else on this list is. Before you go, unplug lamps, TVs, computers, wi-fi routers, if you can, your refrigerator, and any other electronics. Obviously, if you still have frozen food, don’t unplug your freezer or fridge, but I doubt you need your fan plugged in and off while you’re gone. Remember, just because it’s off, doesn’t mean it’s still not using electricity.

If you turned on lights, turn them off.

At home, in your hotel/hostel/airbnb, etc… If you turned them on, turn them off. Just because you’re not paying the electric bill, doesn’t mean you can’t be conscious about your surroundings. The same goes for air conditioning/heating units as well.

Know how your money can actually help.

This happened to me when we went to the floating village in Siem Reap. Our boat took us to a store and asked us to buy rice for the schools. While we were able to visit the schools and orphanages to physically hand over the rice, and our tour guide informed us of how much the rice will feed, and if we did get ripped off, it was really minor, we were still left a little uneasy by the end. Just find guides or people you trust and listen when they warn you against traps. Also, never buy milk for a woman and her baby if she’s begging you on the streets. She’s going to turn around and sell the milk back and split the profits with the shopkeeper.

Do thorough research before you do anything with animals.

This also happened to us in Chiang Mai. After we couldn’t reserve spots at the elephant sanctuary, we went to Tiger Kingdom. I saw it on a travel blog (who I’ll leave unnamed) that I followed at the time, and thought it must be pretty good. Plus, it was touted as a sanctuary. We were told the tigers aren’t drugged, and they were trested well, but I recently found out that it’s not a tiger sanctuary at all. It’s a bit of a let down, and I certainly feel foolish in retrospect. Just be smarter than we were researching anything you do with animals. Quick tip, you should probably never ride an elephant, whether it’s at the Renaissance Faire or in Cambodia. 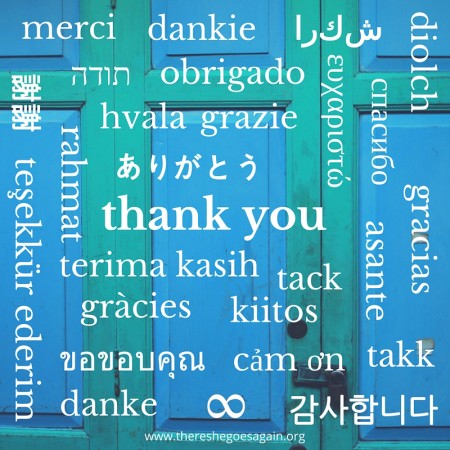 Learn to say thank you in the necessary languages.

Frankly, more important than “hello,” is saying “thank you.” You might find yourself lost, trying to haggle, confused, or just buying some food! It’s always polite to say thank you, and it’s always more polite to say it in the language of the local you’re interacting with.

Are they street performers? Are they some kids hanging out on the side? Don’t take pictures of them! They’re not props to your tour, and if they’re being forced to street perform, you shouldn’t be supporting that anyway. I was in Gyeongbukgung Palace, and I saw a few Korean kids playing in their hanboks, and some tourist went right up in their faces and started taking pictures on her phone…. No interaction, no asking… Don’t. Do. It. How you would like it if some tourist just came up in your face and started taking pictures of you? Kids are young, too, so they’re even less likely to speak up at feeling uncomfortable than an adult who might wave you away. I get it, kids are cute, especially kids in traditional wear. But unless you know them, know their parents, or form some sort of relationship with them, you don’t get to photograph them like you would a cool looking temple or side street.

This is obvious, but DON’T LITTER.

I hope I don’t have to elaborate on this. Your trash goes in a trash can. Your recyclables go in to the proper recycling bins. Not on the ground. Not tucked into a corner. Not tossed behind you on your way out. If you can’t find a trash can, hold on to it until you reach a trash can. And this goes triply for your gum. I’ve never seen someone stick their gum anywhere but a trash can myself, but it obviously happens way too much. In fact, if you see someone trying to stick their gum somewhere, I feel like you have a right as a good human being to smack them.

Hey, guess what? There’s a reason you’re not supposed to photograph something. So respect the wishes of the sign and the poor smucks who have to repeat themselves constantly to not photograph places when it says you’re not supposed to. Just because this might be the only time in your life you get to see the Sistine Chapel in person, does not mean you get to sneak a photograph with the eight million other tourists. Someday it’s going to be shut down to the public, and you’ll get to count yourself as one of the reasons why. Don’t be disrespectful.

If you’re making USD, AUD, GBP, etc quality salaries, you can afford to tip generously in developing countries. I could get a massage for $15 in Cambodia for an hour in my room. I tipped my lady at least $10 because, hello, even that would amount to $25 for an hour long massage. I’m not saying pretend you’re a Rockerfeller and throw your money away, but maybe up the percentage you tip when you travel to lesser well off countries versus what you might do at an Applebees at home.

Also, keep in mind places where it’s not appropriate to tip at all. Not only will it be unnecessary, you could actually offend them.

Do thorough research into volunteer work you want to do.

As weird as it sounds, sometimes short volunteer stints hurt more than they help. I haven’t done a ton of research into it, but I’ve read a few snippets here and there about the fallacy of paying to go somewhere solely to volunteer. As cute as you might look surrounded by a bunch of school children in your next profile picture, really think about how much difference your week long trip solely to volunteer actually makes versus donating that in books, clothes, and things they actually need.

Hey, if their culture finds it inappropriate to show ankle, don’t show ankle. It’s a sign of a respect, and it’s definitely not your place as a traveler to start a social revolution around clothes. Do your research so you’re not showing up dressed inappropriately. Also some places flat out won’t let you in if you’re not up to dress code.

Above all, don’t be too hard on yourself (unless you’ve littered, be extra hard on yourself). We can’t be 100% perfect all the time, and we’re bound to accidentally do something or contribute to something we have’t realized was wrong until after the fact. Just recognize you made a mistake and pass along the information so future travelers know to be aware. And try to be preventative in the future by doing research (there’s a trillion travel blogs out there, utilize them!).

What do you think? Any tips you have for being a more mindful traveler? Any lessons you’ve learned after the fact?

Photographs and Words by Samantha