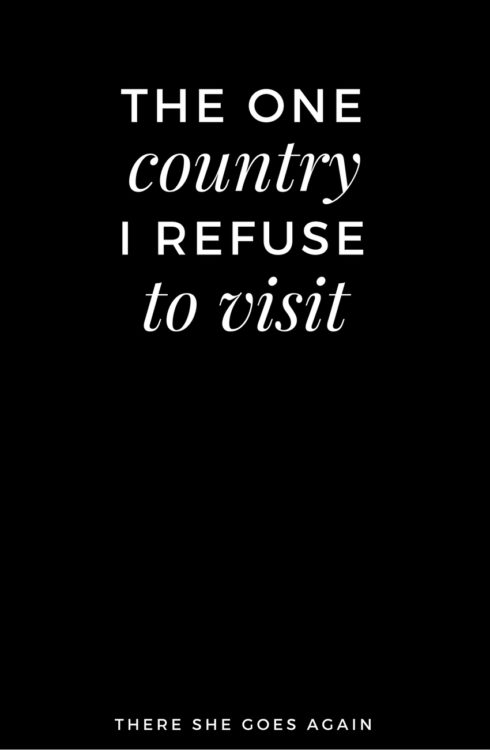 If you know me in real life, you know I’m pretty unapologetically vocal about certain topics. Somewhere between my brain, conversations with friends, Facebook rants, and There She Goes Again, I filter a lot. Additionally, I try to keep a positive, calm vibe to this site because that’s what I like to read when I’m not getting worked up over news articles.

Anyhow, I’ve been wanting to write this post for a long time, but I just haven’t figured out how until recently, with a lot of conversation about avoiding the US and other more concerning tensions.

While I don’t personally condone not visiting a country based on their government, there is one place I’m extremely against traveling to especially given the alternative choices. This is something I’ve been studying and watching for the last six-seven years, so trust me when I actually do know what I’m talking about. Maybe not as well as a someone who has formally studied the nuances of Korean and East Asian politics, but probably more than your average traveler.

I absolutely refuse to visit

For those who don’t know, here’s a quick history:

After World War II, Korea was essentially split into two along the 38th parallel between the USSR and the US. Naturally, the USSR implemented communist ideals and propped up Kim Il Sung as the leader while the US propped up Rhee Syngman in the democratic, capitalistic south. With both leaders wanting to reunify the peninsula under their own government, the Korean war broke out. The war caused over a million deaths and eventually led to an armistice that didn’t technically end things. Over the decades, North Korea turned from whatever communist government it pretended to be to the outright oppressive dictatorship we know it to be today.

And as far as the evidence, well, it’s been recorded that North Korea has concentration camps. Initially, it started with refugee tales and once satellite imagery grew more advanced, we could actually photograph these places.

Anyhow, here’s why I will not visit North Korea, and why I think you need to really be informed on what you’re contributing to before you decide.

It’s not some mystical no man’s land for you to “discover.”

You need to be in a tour group to even get into this place. Last time I checked don’t travel bloggers and “seasoned travelers” balk at the idea of joining a tour bus and being led around by a guide?

North Korea and Pyeongyang aren’t mythical places. They only seem cool because no one really knows what’s going on inside the country due to its oppressive nature. You’re not going to have any secret conversations with locals, discover magic Korean voodoo, or even see truly stunning architecture.

From a personal photography standpoint, most images I’ve seen of North Korean architecture are less than impressive.

If you’re truly interested in Korean culture, South Korea has it and then some.

You know who’s super proud of their culture and history and traditions? South Korea. And they’re pretty damn eager to share them all with you. Your tourist dollars are better spent in a country that at least pays for its past crimes and wants to get better (see: Park Geun-Hye getting thrown in jail) despite its shortcomings.

You’ll enjoy yourself way more stumbling your way through Korea’s countryside, getting led by the hand by a smiling ahjumma, and feasting on something pungent and delicious than spending over a thousand dollars for a guided tour of Pyeongyang.

North Korea is NOT some country that didn’t bow to the capitalistic forces of the Western world.

Listen. I completely believe communism and socialism are not actually bad in theory. They literally just want people to get equal chances in life.

But you know what? People suck and leaders have consistently taken communist ideology and tainted it with corruption and power-hungry motives. Let me just say this clearly for those in the back, North Korea is communist like man-hating women are feminists. THEY AREN’T.

The mere fact that North Korea has distinct social classes goes against the very definition of communism. The fact that these class levels are decided based on loyalty to Kim himself is some next level bullshit.

This isn’t some communist country stickin’ it to the Western man. Sorry to burst whatever anti-Western bubble you’re in.

North Koreans are literally prisoners of their dictator.

I know the arguments. “Don’t listen to the media. It’s just fake news. Obviously, someone would want you to believe North Korea sucks, you’re getting your news from the Western World!”

Unless you’ve personally sat and listened to the accounts or hopes of a North Korean refugee, you can sit your ass right down. Because I have. And you know what’s scary? Some of these people can’t even risk having their photo taken because they still have family that could be punished for their escape.

If you can’t make it to a speech, there are two different TedTalks about it from refugees who can show their faces. Here’s a fun gem from Lee Hyeonseo’s speech

When I was seven years old, I saw my first public execution. But I thought my life in North Korea was normal. My family was not poor, and myself, I had never experienced hunger.

Or this one from Joseph Kim’s speech:

Oh, and for good measure, here’s a fun little line from the Human Rights Watch’s 2017 Report:

There are hundreds of refugee stories out there. My personal favorite charity is Liberty in North Korea, and they also have plenty of more refugee stories on their site for you to peruse in your free time.

Wait, sorry, I’m not done yet with the abuse.

Heck, North Korea is ready to do it to silly foreigners too! Remember Otto Warmbier? Yeah, no, I don’t feel particularly bad for him because

Anyhow, he was sentenced to 15 years “hard labor.” What does that mean? Well, just have a look at the HRW’s “Inhumane Treatment in Detention” section.

**EDIT: Updating this section given the recent news about Otto Warmbier’s return to the US and subsequent death. Apparently, the crime is still only alleged (the video proof has never actually been shown). Obviously, this is a sad ending no one wanted and goodness knows he didn’t deserve to die, but, as you’ve seen with the rest of this article, given the reports on what they do to prisoners, this really isn’t a surprise. A sad (devastating for his family and friends) confirmation of what we were basically told would happen given other reports but not a surprise.

I could go on, but I think you get the point by now.

I honestly feel as travel bloggers we owe it to you guys to be better about our research and intentions. We make mistakes, of course, but we should be able to admit them and use our platforms as a warning against future mishaps.

I don’t own you, so I can’t force you to not visit North Korea. It’s your own damn money and time, so do what you want. But I hope these reasons shed a little more light on why your tourism might be harmful.

And you still want to visit? For what? Subpar architecture and the least authentic tour of your life?

Let me know what you think. Yay or nay on North Korean travel?

** Let me be clear, I think the North Korean landscape will be well worth visiting some day when its citizens are free and the peninsula works on reuniting. But while North Koreans live in fear of saying the wrong thing, I’m obviously a strong nay.

*** Also I recently discovered this Guardian article while doing some research. If you don’t care at all what I think, then maybe you’ll care what refugees and defectors think.