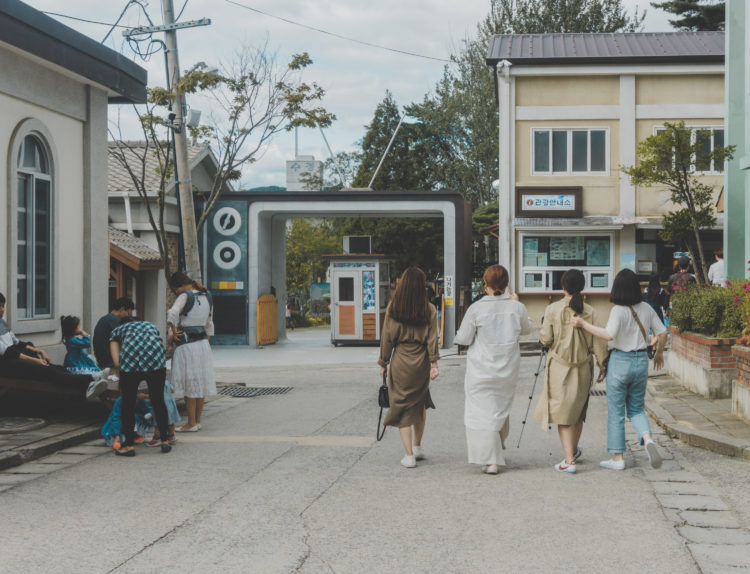 Hey, hi, sorry I’ve been MIA. As you can imagine, I’ve been busy getting back into the swing of a full-time job, and I haven’t had quite as much time to dedicate to the online life. I do have a ton of posts planned that I just need to finish, but I’ve been enjoying the nice weather, getting into a routine, and trying to be better at eating healthy and meal planning! So, where to start…

I’m really enjoying teaching again. I didn’t think I would, but I LOVE teaching adults so far. It’s actually making me not like teaching my elementary students’ after-school classes as much… *hides* I do still like teaching little kids, but there’s something incredibly nice about teaching students who want to be there and are entirely self-motivated. All I have to do is guide the lesson and explain grammar points or clarify things for them. There’s no prodding someone awake or getting them to do more than the bare minimum!

I’m also getting into the swing of navigating the different centers in Suncheon. I’ve started walking more (still getting a bike, I’ve honestly just been lazy), especially after classes. Instead of rushing home in a taxi, I’ll take a half hour to an hour to meander and get outside. I’m also starting to get used to Suncheon’s layout and where everything is in relation to each other. I swear if there’s one reason to travel more, it’s that it forces you to get better at navigation! I used to get lost after I got my driver’s license ALL the time, and I’d call my dad crying only for him to realize I’m a whopping 5-minutes from home…

Okay, so like I said I’m trying to get into a pattern! I did do another workout video after that Butt Bible one and started walking instead of taking a taxi or the bus, but I wasn’t working out quite as much as I should have in Week 23… However, this last week I went for two different runs and signed up to do the 10k at the Suncheon Bay Marathon! My friend, Ryan, is running the half and he added me to a Yeosu running group with other people participating.

It’s in November, so I actually want to try to run the whole thing. It’s ONLY 6.2 miles, which is less than half of a half-marathon, so I feel like that’s a totally doable goal. I’m surprised that I’m able to run for nearly 30 minutes straight right now actually since I’ve been so lazy with my fitness. Either way, I have 90 minutes to run the whole thing, so if I can get to 11-minute miles or under, I’ll be golden.

Who knows, maybe next year I’ll sign up for more! Maybe I will be the kind of person who signs up for 5ks on Thanksgiving :p

I also bought a pair of super cute cropped dress pants from H&M. They don’t fit around the FUPA area, but I laid them on my chair for inspiration haha

Okay, I will be the first to tell you my dietary habits by nature are very far from healthy. I’m actually pretty sure my body is incredibly unhealthy, though luckily I’m not seeing the consequences of it just yet. I’m still young enough to get myself into a fitness routine, I don’t start sweating or dying if I choose to walk 30-minutes to school (though I noted I got out of breath while my thin companion seemed fine once), and as far as actual chronic problems, I’m totally in the clear. However, the number on the scale doesn’t lie, and even if you’re the kind of person who doesn’t believe in scales, you’d admit mine is at least a little alarming.

ANYHOW not where I was planning on going with that! Basically, one of the other components of me getting in shape and being healthier is my diet. I have almost no self-control when it comes to sweets or soda, which is bizarre because growing up I never had much of a sweet tooth. Last year towards the end of my contract, my diet consisted of school lunches, vanilla lattes, and conveniences store crap (i.e. cookies and my beloved cider). It was BAD.

This last week I was pretty proud of myself! I made chicken stock from scratch for the first time in ages and prepared meals ahead of time for the week. I did wind up ordering a few times (the Yogiyo app makes things too easy…), so my goal this week is to only eat out once this week. I wrote down a bunch of different recipes from Victoria Lipotesky and SortedFood’s Youtube channels, so I’m excited to continue experimenting. I still can’t believe how easily I found dates in my supermarket when I thought they’d be nonexistent in Korea (awkwardly I tried to google “where to find dates in Korea” like I do for all random food and only came up with dating sites :p).

Budgeting is still going okay! I get my first paycheck soon, and I figured out my banking so I could access the plane refund and settlement allowance. I just transferred them back to cover loans and CC payment this month. I wrote down everything I spent money on last week, so my goal is to continue keeping that amount small. My ultimate goals are to get rid of my CC debt and my Sallie Mae loan, so it’s slow chippin’! The sad thing is, even with both of those gone, I still have my government loan…

If you have any tips for budgeting, please let me know! ESPECIALLY if it’s specific to Korea. I’ve been watching The Financial Diet videos and making notes, but I know there are about a thousand ways I can improve.

I promise I have NOT become a total shut-in who only goes to work and comes home and sleeps (though that happens more than I’d like to admit…). I’ve been making friends in person, hanging out with friends I had before I left, and being decently active. Last weekend I went to the Suncheon Film Set with a new friend, and this last weekend I had book club and met up with a mutual friend in Gwangju.

It’s definitely an entirely different setting than when I came to Namwon. There I met everyone in one go and we literally all lived in the same 3-story building. I actually look back at those first few months fondly because they were so special and different from what the Villa would be like in the following years and even now. My friend who just left told me there were actually a lot of Koreans moving into the empty rooms, so it no longer has that close-knit vibe it did when I first moved in.

Chuseok is also coming up, so one of my friends will actually come home to Suncheon, and we can hang out. I haven’t seen her in a year, so it’ll be fun to catch up in person.

So a few things. I accidentally stayed on my bus back from Yeosu and wound up in Mokpo (which, yes, added an extra TWO HOURS to my commute home), so I went to the YP Books there to poke around while I waited for my bus. I wound up buying 3 paperback books to read, and I’m really going to try to make an effort to read physical books rather than listen to Audible or read on my Kindle. I don’t know if that improves anything, but it forces me to put my phone away on the bus instead of flipping through Instagram. A part of me wants to try reading a book a week (though this would be a mix of paperback, Audible, and Kindle since I’m pretty sure my mother would kill me if I shipped back 52 paperback books…). Here’s what I have so far:

I also haven’t gotten a phone plan or Wi-Fi egg. I’m actually really enjoying unplugging in transit and forcing myself to ask someone for directions instead of just staring at a map on my phone. I dunno, maybe I’ll freak out and get an unlimited data plan, but there are so many Wi-Fi hotspots in Korea, I’m not super worried. I do have a pre-paid SIM for calls and such, but I need to add money to it…

And to round out my self-improvement moves, I downloaded some language apps, including re-downloading Duolingo. I noticed my Spanish has gotten embarrassingly bad in the last few years from lack-of-use, so I’m brushing up on grammar and vocabulary again. I’m also starting over with German so I at least have some base when I begin graduate school, and, of course, I added Korean to keep that at least intermediate. I really love languages, and while I am definitely not naturally good at them, I enjoy studying them. I mean, I want to study linguistics for a reason!

I think that about covers it in the life of Sam! I know that was a particularly rambling post… What’s new with you?

*Some of these links are affiliate links!